Airport could allow alcohol throughout concourses 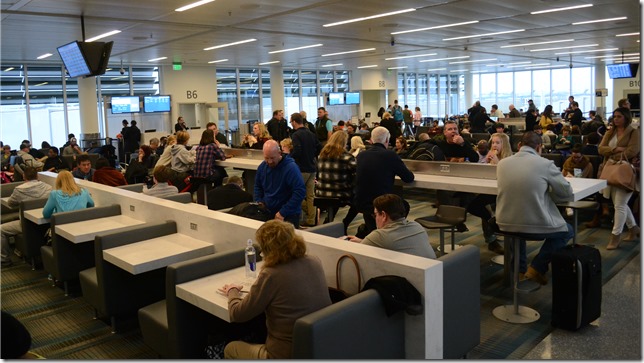 Passengers wait to board their planes outside of DeSano Pizza Bakery in Concourse B at Charleston International Airport. If the proposal is approved, passengers will be allowed to bring beer or wine into the gate areas and throughout the concourses. (Photo/Liz Segrist)

Passengers at Charleston International Airport might be able to enjoy wine or beer at their gates while waiting to board flights — depending on how the airport board votes on a current proposal.

Charleston County Aviation Authority board members debated on Thursday whether to allow alcoholic drinks beyond restaurants and throughout the secure side of the terminal — meaning anywhere beyond the security checkpoint.

“The easiest analogy I can make is a bar or a pub in downtown allowing seating on the sidewalk,” Sean Tracey, the authority’s planning and development director, said during the meeting.

Currently, alcoholic drinks have to be consumed within restaurant spaces. The proposal would apply only to beer and wine, and those drinks would have to be in plastic cups. The idea came at the urging of Delaware North Co., which handles the airport’s dining areas.

Aviation Authority CEO Paul Campbell, also a state senator, said allowing passengers to have a beer or a glass of wine at their respective gates could bump up alcohol sales — and ultimately, the airport’s revenue streams. He said the airport police department signed off on the proposal.

Tracey said airport staff talked with other airports that allow alcohol throughout their terminals, such as Ronald Reagan Washington National Airport and Nashville International Airport in Tennessee, about their experiences.

“Other than a revenue generator initiative, it’s a customer service initiative,” Tracey said.

Tracey said some airports with larger food courts do not need a similar ordinance, but the Charleston airport’s smaller concession areas can limit the space in which passengers can eat and drink.

Tracey said the proposal would “extend the area where you can bring a drink” and that all liquor licenses and liabilities would remain.

The board considered implementing a three-month pilot program that would apply to the new DeSano Pizza Bakery in Concourse B and the temporary eatery setup as construction continues on the food hall.

The board would study the results of the pilot program in May and then decide whether to extend it to include other restaurants as construction finishes and they open later this year.

Board member Margaret Seidler, a public speaker who focuses on organizational improvement, said she would like to see studies from other airports that allow alcohol throughout terminals to see whether police encounters increased.

The board decided to study the idea further in a March 7 committee meeting before bringing it back to the full board for a vote.

“I just want to make sure we’re making a sound decision,” Seidler said.

If the proposal is approved, board member Henry Fishburne Jr., a real estate broker with Lee and Associates Charleston, recommended putting tops on the plastic cups, similar to how alcohol is served at symphonies or musicals.