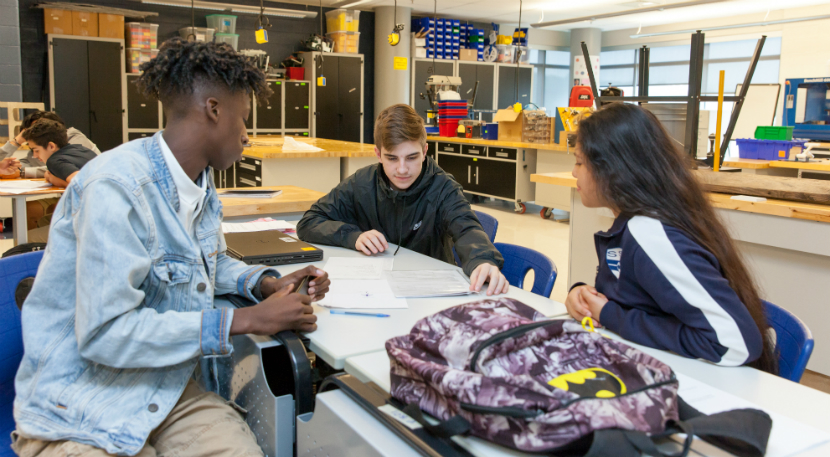 Over the next few months, high school students will design an airplane cockpit seat, and produce it on a 3-D printer, from inside their North Charleston classroom.

R.B. Stall High School is one of six high schools in the state participating in a pilot program to introduce aerospace engineering to students.

Educators and industry leaders say they hope the new program will interest more students in aerospace careers and will set them up for further education or training. 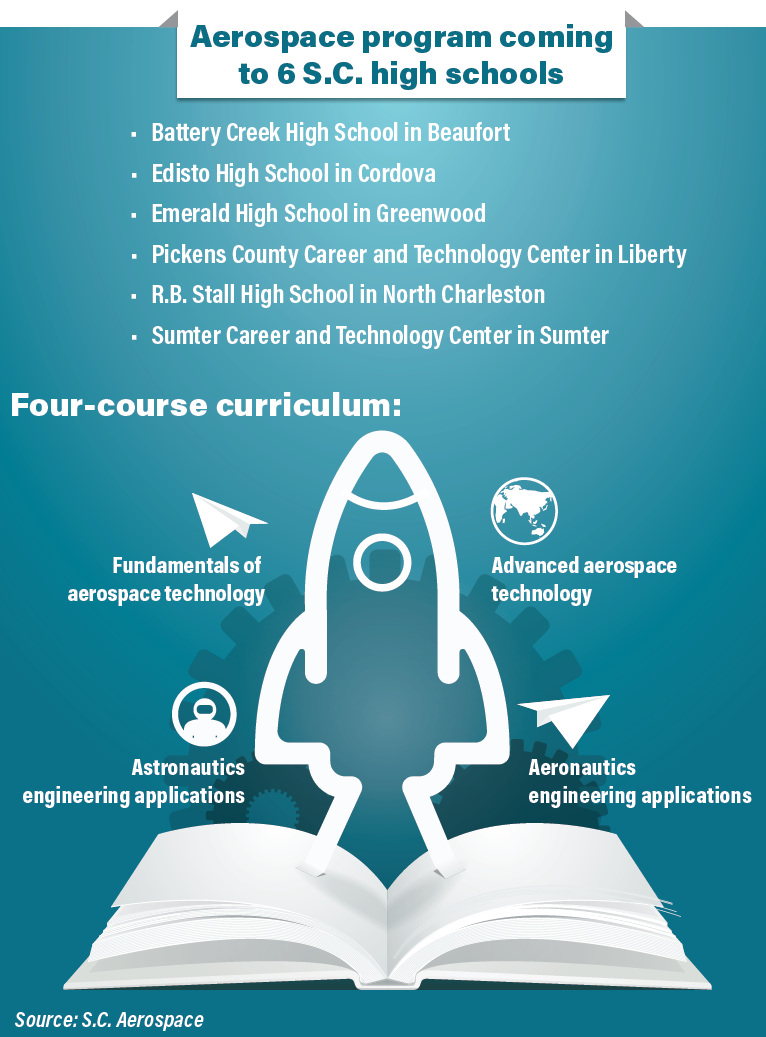 The new aerospace curriculum introduces students to the diversity of aerospace careers, such as CNC machinist, engineer, aviation mechanic, airframe assembler and astronaut.

The courses are for students who want to learn how airplanes and spacecraft are designed, built and flown. Students need a strong math background; algebra is often a prerequisite.

Stall Principal Jeremy Carrick said the curriculum can help students decide whether to pursue a career in aerospace.

Students will not receive a certificate for completion of the four courses — although that is an eventual goal. Beasley said students will graduate with a solid foundation of aerospace concepts, readying them for further study.

Edisto High School, in the Orangeburg County town of Cordova, is another school offering the curriculum. Principal Michael Ames said he wants graduates either to be ready for a two-year or four-year college program or to have the skills to make them employable and trainable at an aerospace company.

“Kids need to come out of school with these skills so they can be employed right away, especially at a school like ours, a very rural school,” Ames said. “Not all of our kids will go to a two- or four-year school, so they’ve got to be equipped to hit the workforce.”

S.C. Aerospace — a partnership among the state Commerce Department, Council on Competitiveness and industry executives — talked with aviation-related companies across the state in recent years about challenges they face.

Students’ lack of long-term focus on science, technology, engineering and math was a major concern. Steve Townes, president and CEO of Ranger Aerospace in Greenville, pushed the state to establish an aerospace-themed high school.

“It was perplexing that we’d become one of the fastest-growing states in the aerospace industry, yet we didn’t even have one,” Townes said.

In response, S.C. Aerospace gathered 35 educators to evaluate existing aerospace courses in S.C. schools and search for a new curriculum. The four-course program they landed on was developed by the Southern Regional Education Board, an Atlanta-based nonprofit organization that works to improve public education in its 16 member states.

Aerospace companies and educators evaluated the materials, and the state Education Department approved them.

In addition to the six participating high schools in South Carolina, the program is launching in nine schools across the country — three in Ohio, two in Alabama, two in North Carolina and one each in Delaware and West Virginia.

Brad Nickles, principal of Emerald High School in Greenwood, said he hopes the courses will give his students a jump-start in the field.

“We can create a pool of very efficient employees that are ready to go,” Nickles said. “These jobs could be generational changers for some of our communities.”

The state’s Education Department designated a $50,000 grant for each participating school in South Carolina, to cover teacher training and equipment purchases such as software, 3-D printers, wind tunnel models, laser cutters and laptops.

Teachers spent two weeks in Atlanta this summer undergoing training from NASAand Georgia Tech instructors to ready themselves to teach on the same equipment and software used in aerospace plants today.

Students will learn aerospace engineering principles and present projects to industry representatives, said James Stephens, executive director of the S.C. Aeronautics Commission and chairman of the S.C. Aerospace Education Working Group. Classes can have up to 24 students, though many are smaller. 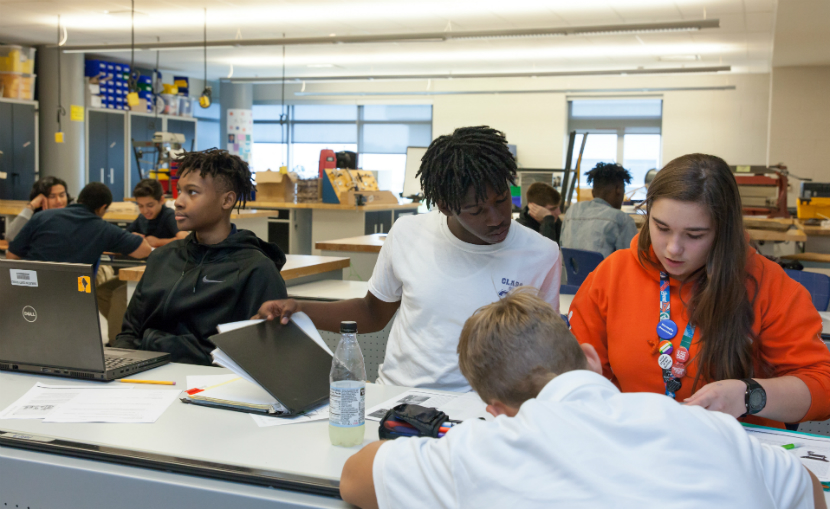 The new curriculum expands R.B. Stall’s existing offerings, which include an aerospace engineering course through Project Lead the Way, a national nonprofit focused on increasing STEM classes in schools.

The high school previously offered an aircraft manufacturing course taught by industry professionals, but the model did not work. Carrick said the real-life perspective was valuable for students, but he said students often need an instructor with a teaching background to handle various learning styles and paces.

“It’s a total shift in taking someone who is an expert in aircraft manufacturing or aerospace engineering and trying to convert them into a high school classroom, to taking a STEM-certified teacher and sending them to get specifically trained on these modules,” he said. “This model is much easier.”

This model paid for equipment from the start, and a math teacher and science teacher from Stall attended the training. Currently, around 70 students at the high school are enrolled in the aerospace curriculum.

‘A well-paid job for life’

The average salary at a private-sector aerospace employer in South Carolina is about $70,000 a year, according to S.C. Aerospace, though salaries vary depending on position and skill level.

Ken Hitchcock, director of Pickens County Career and Technology Center, said he wants interested students who enter the program to leave it being able to envision themselves building planes at Boeing or working in space with NASA.

Many educators said the aerospace courses could help students find jobs in the communities they grew up in.

“We have so many kids that leave here because there are not a lot of economic opportunities, or they’re not prepared for what is offered here,” Ames said.

Officials hope the pilot program will expand over time, ensuring enough S.C. graduates will have the needed skills to fill future aerospace jobs in the state, rather than pulling so many workers from out of state.

“These courses not only prepare students for postsecondary success but also teach them critical skills needed to fill jobs in one of our state’s most thriving industries,” S.C. Education Superintendent Molly Spearman said in a statement.

Townes, who is also the chairman of S.C. Aerospace, said implementing the aerospace curriculum in six high schools is a strong start, but he wants to see the state’s technical colleges partner with high schools statewide to grow the program.

He said such an initiative would attract more aerospace suppliers and manufacturers to the state, as well as set students up for careers in the field.

“For young people who may be attracted to this high-tech, steadily growing industry, I can tell you that if you learn skills to work on or around airplanes, it’s likely you’ll have a well-paid job for life,” Townes said.