The drought in South Carolina is causing a crisis for the state’s farmers, an agricultural expert told the S.C. Drought Response Committee during a drought status conference call Thursday.

The committee concluded that there is “overwhelming evidence” that many counties are experiencing a severe agricultural drought. Some beef producers told the committee they have been forced to feed their cattle hay that was reserved for feeding in winter, meaning more hay will have to be purchased for feeding later this season. Because of limited soil moisture, farmers may not be able to plant for winter grazing, according to a news release from the S.C.  Department of Natural Resources.

Row crops in affected counties will produce decreased yield this season, the farmers told the committee. 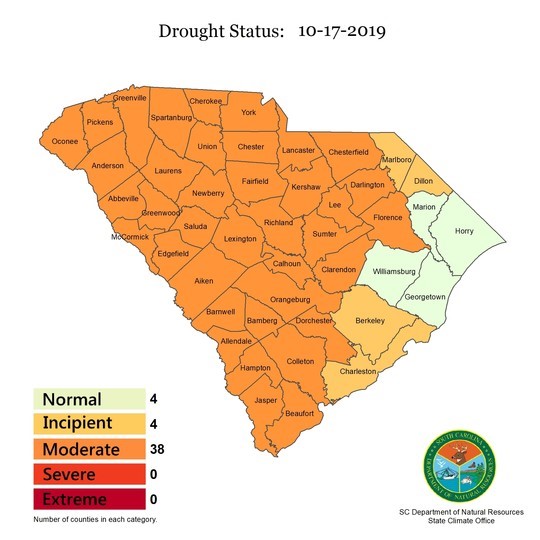 Despite the reports, the committee postponed declaring severe drought in any county. The situation will be evaluated in two weeks, particularly after a weather system is expected to bring heavy rainfall to South Carolina this weekend, according to the release. But some farmers say that rainfall will not be enough to improve conditions.

“I empathize with our farmers and recognize that any rain we may receive out of this coming weather event will not alleviate the current problems, as winter hay has been fed to livestock and crops have already been lost and cannot recovered,” said Aiken farmer Yvonne Kling, who also is chair of the Aiken Soil and Water Conservation District. “We are in a farming crisis due to drought.”

While the committee upgraded the drought status for several counties, a majority of the counties maintained their previous status. The drought declaration is made based on factors such as agriculture, forest fire risk, water supply, and water quality.

The S.C. Forestry Commission reported it has responded to 127 wildfires burning more than 780 acres this month, more than twice the number of wildfires and five times the amount of acres burned during the five-year average for October.

An S.C. DNR hydrologist reported that for the first time since the drought began, several groundwater gauges in the Upstate dropped to levels below normal and that there has been a steady drop in streamflow, groundwater and lake levels. The Department of Health and Environmental Control reports that currently there are no issues withdrawing water from lakes and rivers for the public water supply.