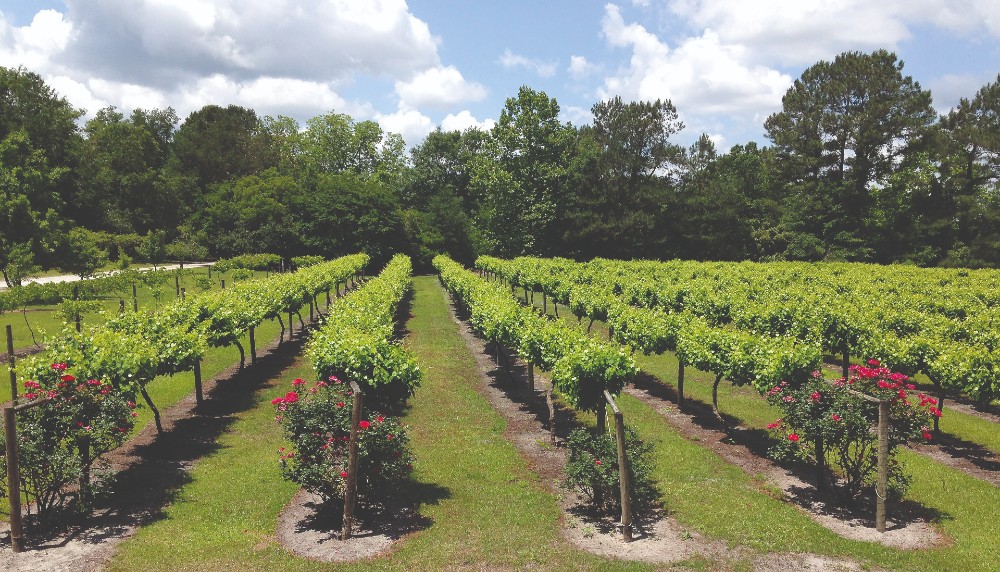 When Vicki Weigle set out to develop a vineyard and winery on the grounds of a former tobacco farm in Horry County nearly 30 years ago, many local farmers thought she was making a big mistake.

Recently, one of those nay-sayers stopped by her thriving business, La Belle Amie Winery at 1120 St. Joseph Road in Little River, and admitted he was wrong.

“This man told me not too long ago that he used to tell everybody ‘That woman is out of her mind,’ and now he realizes how wrong he was,” Weigle said. “He said he just wanted me to know that he admires what I’ve done.”

What Weigle did was to convert fields on the tobacco farm that was her mother’s birthplace into vineyards of muscadine grapes that have now become a wide variety of wines she sells under the Twisted Sisters label. Each year La Belle Amie produces about 5,000 cases of wine. It also plays host to thousands of visitors who come to wine tastings, shop in the gift shop and enjoy live music twice a week.

With her success at La Belle Amie, Weigle is part of a small but growing number of women finding success in the wine industry nationwide and in the Southeast. In South Carolina, a diverse group of women are getting involved in the industry at all levels, from winemaking to distribution.

North Carolina-based winemaker Lindsey Williams is breaking ground in two ways. Not only is she a woman, but she also is one of the less than 1% of American winemakers who are African American.

Williams opened her first winery, the successful Davidson Wine Co., in Charlotte, in 2019. She expanded her business to Charleston earlier this year, opening Charleston Wine Co. at 63 S. Market St. in February.

“When I first opened Davidson Wine, I think there was skepticism, both because the Carolinas are not generally a well-known place for wine, and because there are simply not a lot of people in the industry who look like me,” Williams said.

“However, I’ve received a lot of support not only from other women in the industry but from members of the African American Vintners Association and others. And we’ve received great response from wine lovers. At both locations, we meet people who travel from far away to try our wines.”

Williams came to the industry from a career as a corporate lawyer. She loved wine and would visit vineyards wherever she traveled. She got interested in the business after staying at a vineyard during a trip to Italy.

What followed was a long process of training in a winery in 2018 to learn every facet of the process.

“It’s actually a very tedious and strenuous process – I think everybody envisions it as somebody stomping on grapes, and that’s not anywhere close,” Williams said. “Actually, cleaning is the biggest part of it. Keeping everything sterile and clean throughout the process is one of the biggest challenges. And you have to learn all the different varietals, the various regions where grapes are grown, and the different kinds of wine.

“There are lots of nuts and bolts to making wine.”

One of the big challenges is climate. South Carolina weather is simply not conducive to growing most traditional wine grapes. However, sweet grapes like scuppernongs and muscadines thrive here, which is why Weigle grows them at her Little River location and at another vineyard in North Carolina. Williams, meanwhile, sources her grapes from California, the Pacific Northwest and sometimes from overseas.

A taste of Spain

It was the search for a headache-free glass of wine that drew Fort Mill resident Mary Anna Ossa into the wine business.

Ossa, a native of Venezuela who has lived in the Carolinas for more than 20 years, launched Partners and Grapes wine company in Fort Mill in 2021. The company specializes in distributing organic, vegan wines made from grapes grown at a woman-owned vineyard in the Panedes region of Spain.

“I’ve always loved wine, but every time I had more than one glass I would get a horrible headache, and I stopped drinking wine for a while because of that,” Ossa said.

While on a visit to Spain to see her best friend from college in early 2020, Ossa had a couple of glasses of wine and, as expected, had a bad headache the next day.

The two women then started researching the ingredients of wine and discovered that it is often the sugars, sulfites and tannins added to mass-produced wines that causes headaches.

They then sampled some organic wine which resulted in no headaches, and Ossa decided to get into the business.

“I realized I’m not the only one looking for this type of wine, and instead of having to go home and find stores that carry these organic wines, I decided to make my own,” she said.

Ossa’s background in sales and marketing helped her to navigate the challenges of launching a wine company, but she admits there were some daunting challenges at the beginning, including learning about all the regulations involving the sale and distribution of wine.

“There was a lot of learning involved, but this whole experience has been the dream I didn’t know I had,” Ossa said.

All three women have advice for others like them who are looking to get into the wine business.

Williams urges women with an interest in wine to educate themselves about all levels of the industry and figure out what sector interests them most.

“Owing a winery is not the only way women can be involved,” she said. Distribution, sales and marketing are other segments of the industry where women are active, she said.

Weigle said happiness is one of the keys to running a successful winery.

She urges women to do all the research they can about the field, get some work experience at a winery, and figure out what level of stress they are willing to accept.

Years ago, she had ambitions of distributing her wines around the region, but soon discovered that distributors wanted her to make the rounds of restaurants and wine stores in the Carolinas and beyond to host wine tastings and other events.

That hectic travel schedule was not for her. Plus, she said, it took her away too often from the land in Little River that she loves best.

“I decided I’d be happy with our 5,000 cases a year we sell from here,” she said. “I will never be rich, but I can lead a nice life here and enjoy what I do. It’s worked out very well in the long run.”

Ossa hopes to use her company as a way to reach out and support other women entrepreneurs in the wine industry and beyond. The key to a successful career in wine or anything else, she said, is courage.

“Once you make the decision to start a business and take that first step, you’re halfway there,” she said.