The newest additions to the booming Cottontown neighborhood are certainly eye-catching.

A pair of robot-shaped cisterns outside the building of architecture and design firm Studio 2LR will serve both an aesthetic and a practical function. While adding a bit of creativity to the building at 2428 Main St., the cisterns will also help funnel away groundwater during heavy rainfall.

Gretchen Lambert, vice-president of Studio 2LR, hopes the robots — one with red lipstick, the other sporting bits of metal that could be beard stubble — help address a need that became evident before Studio 2LR opened in its new location in August 2016.

“The last weekend of July, we moved everything in and were excited about getting started,” Lambert said. “There was a strong storm on Sunday that brought a lot of rain. When we came in on Monday, we found the offices flooded.”

Lambert said the company lost years’ worth of files, and the carpets were completely ruined.

“We hoped it was just a one-time thing, but almost a year later, it happened again,” Lambert said. “That’s when we knew something had to be done.”

The company had the building’s storm pipes smoked in hopes of finding any cracks or defects in the drainage system, but Lambert said the angle of the pipes prevented cameras from providing any definitive information.

“Rather than spending a lot of money to upgrade the road, we wanted to think of other solutions,” Lambert said. “We started looking into cisterns, but most of the ones we found were boring. We wanted ours to sit above ground but not just be an ugly tank.”

The group contacted Clark Ellefson of Vista-based studio Lewis+Clark to help turn the tanks into a public sculpture, and the idea for robots was born. 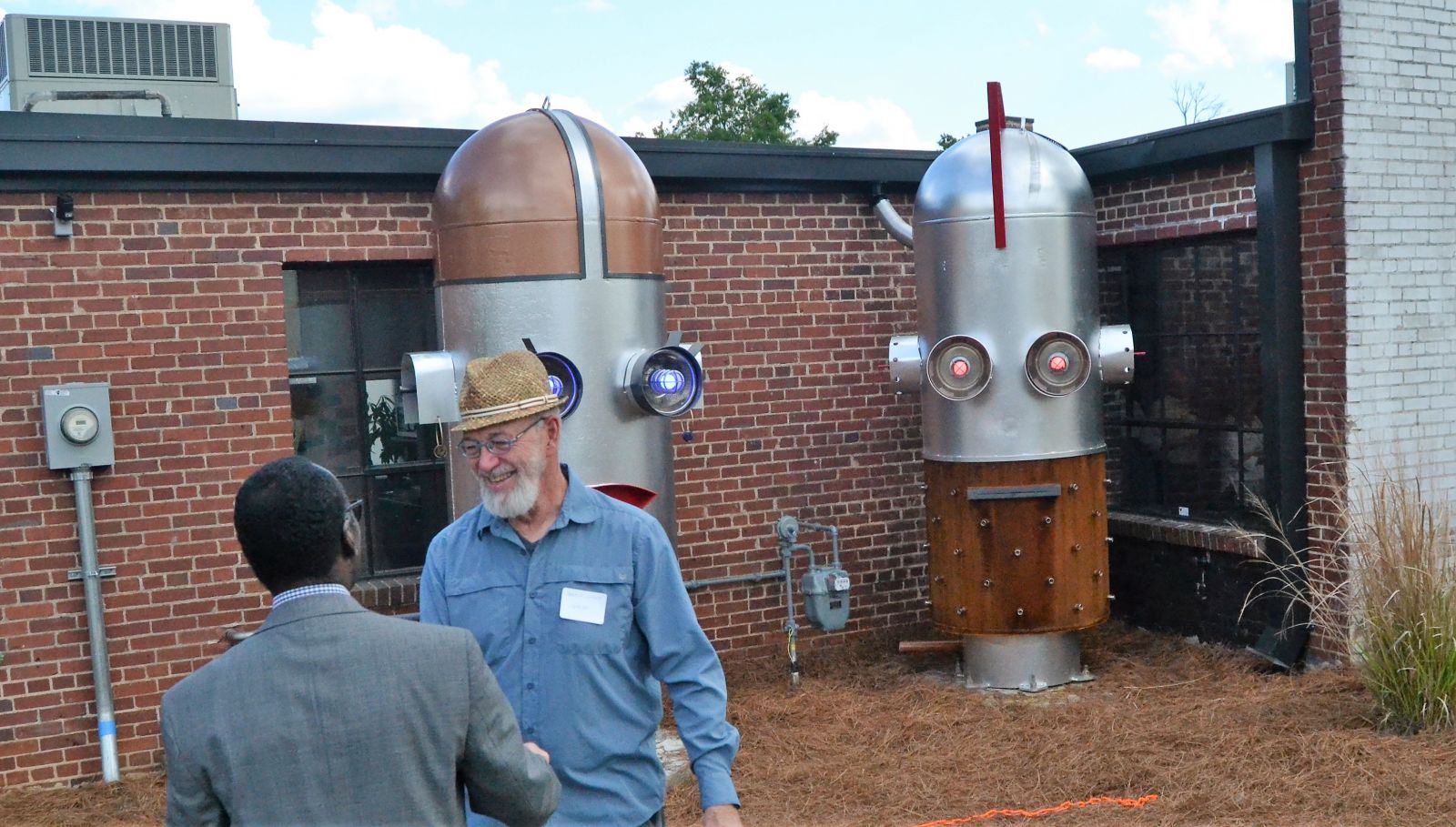 “I have been making robots for a while now, so it was perfect fit,” Ellefson said. “I had worked with 2LR on some other projects and knew they were a creative group and also great to work with.”

Lambert said the plan took shape last summer after Studio 2LR acquired decommissioned propane tanks from Billy Keenan of Keenan Energy. The tanks were then moved to general contractor Stuyck Company, where Chris Stuyck and his team molded the tanks into workable cisterns. Ellefson’s group then created robot features on each tank, including mouths and illuminated eyes.

Lambert said the cisterns have been connected to a gutter system and will hold 1,000 gallons of water combined. Water can then be let out slowly, in a few hours, rather than all at once.

“It still remains to be tested, but we hope it helps with the flooding,” Lambert said.