Anna Sveinbjornsdottir knew her company faced a challenge when it took on the interior design of Hotel Trundle, downtown Columbia’s newest boutique hotel carved out of three unoccupied buildings.

Sveinbjornsdottir, manager of interior design and procurement for architecture, engineering, planning and construction firm Pond & Co., also had an idea how rewarding the work could be.

Turns out she was right about that.

Hotel Trundle, which opened on Taylor Street near its intersection with Sumter in April, won two awards at last month’s Columbia American Institute of Architects design awards ceremony. The hotel took home the inaugural People’s Choice honor and also received a Divine Detail award for its incorporation of light wells to bring a natural light element into its interior rooms. 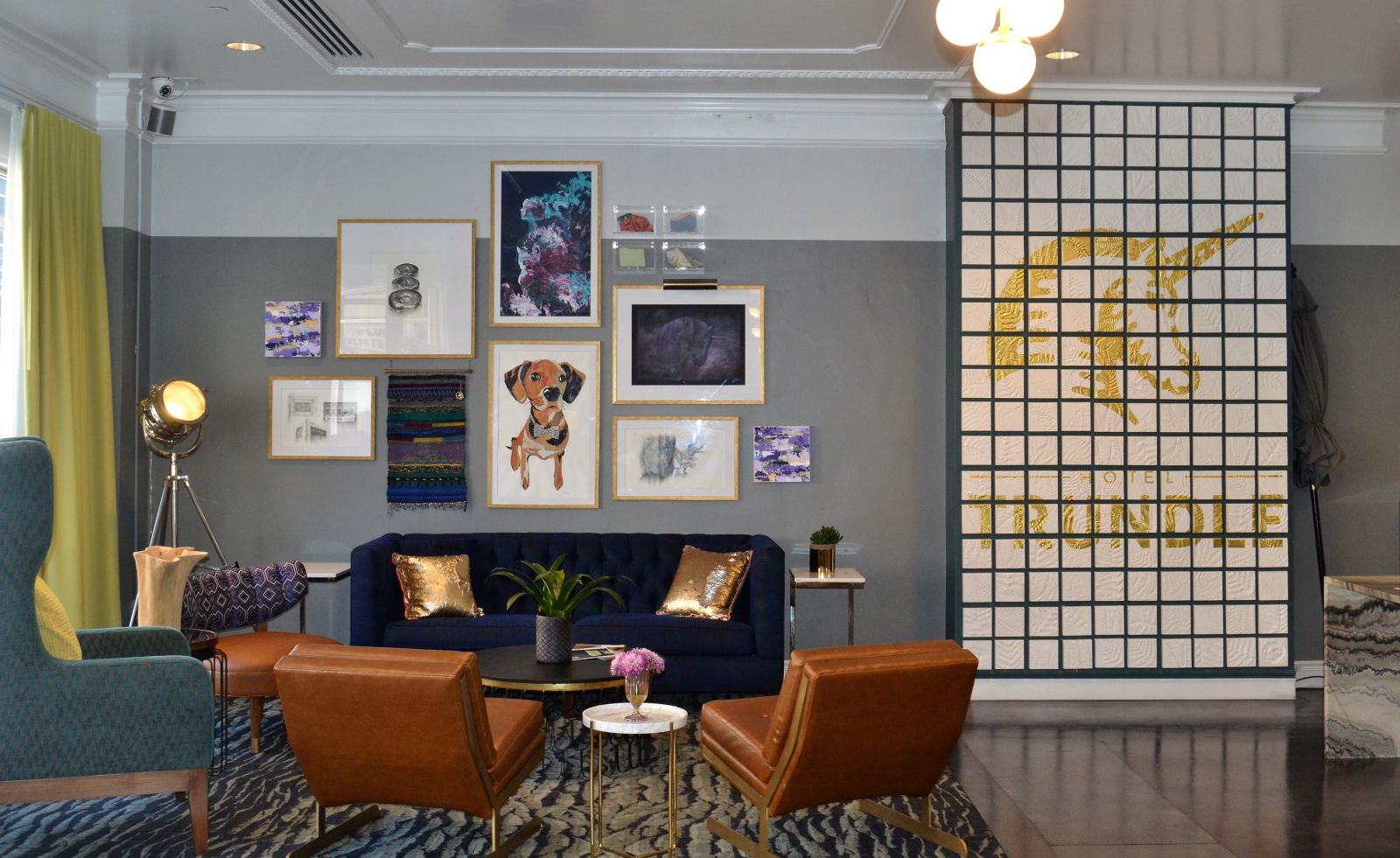 Those rooms, sandwiched between the walls of the former Powell Furniture building at 1519 Sumer St. and the former sites of Rose-Talbert Paints and Western Auto at 1222 and 1224 Taylor St., presented a bit of a head-scratcher.

“In hotels, it’s an absolute must. You have to have a window or light in a room,” Sveinbjornsdottir said.

She credited The Boudreaux Group, the hotel architect and the anchor tenant on the second floor of the former Powell building, for the innovative solution of skylights that filter light down into first-floor interior spaces without natural lighting.

“It came out beautifully,” Sveinbjornsdottir said.

So much so that Room 111, the beneficiary of that light, has rapidly become a favorite of Hotel Trundle co-owners Rita Patel and her husband, Marcus Munse.

“It’s just a beautiful wash of light in the room and very unexpected,” Patel said. “That’s the room we stay in when we have to stay with our two boys.”

Patel, a practicing architect before opening Hotel Trundle, and Sveinbjornsdottir had a long-standing working relationship that proved invaluable in the design process.

“It was very easy for me to communicate with them. Anna knew my design style before we even thought of Hotel Trundle being a possibility,” Patel said. “It was a good partnership. While I really wanted to go wild and crazy everywhere, she would say, ‘This would be more impactful if it was used just here,’ and help me not overdo everything. I think it’s a really good balance of going around the corner and seeing all those unexpected surprises.”

Those include the hotel’s signature white-and-gold unicorn mural, works by local artists and a find-a-word art feature above a staircase that contains, among other words, the names of Patel and Munse’s children, Easton and Nevaan.

“Our job was to get the owners’ vision out of their head and put it into the building,” Sveinbjornsdottir said. “That’s what we do as designers. We come in and we listen to the owners. We take that and put that on paper. When we walk into the empty space, we are already seeing the rooms there.”

The hotel, which winds between three buildings in the combined 23,000-square-foot project overseen by contractor Mashburn Construction, has 41 rooms of varying sizes — another test for Sveinbjornsdottir to tackle.

“Typically, we have four or five room sizes in hotels. I believe we had 15 room sizes out of 41 rooms,” Sveinbjornsdottir said. “It was a huge challenge for manufacturing the furniture — the biggest challenge for us. We worked through it and were able to standardize things like headboards.”

The rooms also have differing wall textures and types, so furniture is sometimes anchored to walls through brick and sometimes plaster. The goal, Sveinbjornsdottir said, was not an appearance of uniformity, but rather a sense of connectivity.

“We wanted to make sure, even though we had three buildings, that when you walk through the hotel you were aware of it, but you didn’t feel disconnected between the buildings,” she said.

Distinctive design touches abound throughout the hotel, from original tin ceiling tiles, repainted a light-catching lavender, to embroidered bathrobes in each room’s closet. The lobby is funky and colorful, with patterns and prints mixing among mingling guests.

Patel oversaw every detail, down to the stained concrete floor, which absorbed a dye called Midnight Black differently in spots, highlighting the imperfections that were not resurfaced away.

“It all came out of just the idea of what we wanted Hotel Trundle to be for our guests,” Patel said. “The expectations that people have when they hit “book” now is being met by what we’re providing. It’s a different experience from a branded hotel. It’s something cut from a different cloth that people don’t expect but really enjoy.”

Nearly a year after cutting the ribbon on the hotel, Patel said she still loves coming to work every day, and Sveinbjornsdottir’s satisfaction comes from having helped the hotel owners make their vision a reality.

“That is the beauty, when owners and designers work well together,” Sveinbjornsdottir said. “Those are long nights and days, working on these projects, and you’re not sure it will always work out. Hearing the owners talk about how proud they are of the space is the biggest accomplishment.”