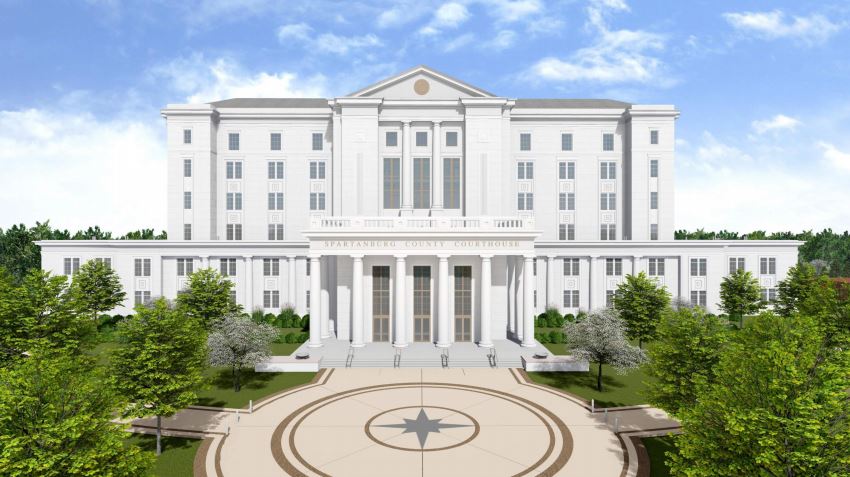 Four years after launching a penny sales tax, public construction projects in Spartanburg appear to be going strong despite potential COVID-19 interruptions, according to the Spartanburg County Council.

One of the projects is the $120 million, 340,000-square-foot courthouse that will one day stand six stories high alongside St. John Street, N. Daniel Morgan Avenue and Library Street. A $12.6 million parking garage for the public and staff is next to the future courthouse site.

“We have to date put toward it about 13,700 labor hours,” State Rep. Roger Nutt said at Monday night’s County Council meeting. “That’s quite a few years in total that have been dedicated to the project so far. If you’ve ridden by the location recently, you couldn’t help but notice what looks suspiciously like one half of a parking deck assembled.”

Nutt led the capital project initiative as a former district six councilor before being elected to the S.C. House of Representatives last fall.

So far, the team has assembled about half of the 600 pre-cast pieces for the 580-space garage, which will take 20 million pounds of concrete. Electrical crews will soon descend on the site alongside a crew launching underslab work, Nutt said.

Almost 50% of all construction documentation has been completed, including specifications of the steel, dry wall and aluminum used in the structure.

The Emergency Operations Center, housed in the existing Judicial Center, is another capital project in the queue. The new 12,000-square-foot facility is estimated to cost about $5.6 million. Nutt said the center is currently in its design and development phase.

County Councilor David Britt lauded the project as an example of local investment in Spartanburg businesses.

“It’s about progress, and the people who are responsible for it are every one of y’all in the audience that voted for something that not many people thought … would pass,” Britt said during the meeting.

According to Britt, the county’s capital penny sales tax has roped in more revenue almost every month this year than in 2019 despite COVID-19’s threat to local retailers. June revenue exceeded $5 million, a million more than June 2019.

“That parking deck coming out of the ground and that courthouse, what is says is progress,” he said. “It’s like turning a battleship around in a creek. What we had was a courthouse that was built in 1957. It had outlived its use a long time ago. It didn’t even have air conditioning when it was built, and what that parking deck, the new courthouse going up, it says, “the new Spartanburg.”

The completed judicial and city/county complex projects are slated to make a $240.2 million economic impact in Spartanburg, according to an impact study requested by the Spartanburg Area Chamber of Commerce, now known as One Spartanburg Inc.