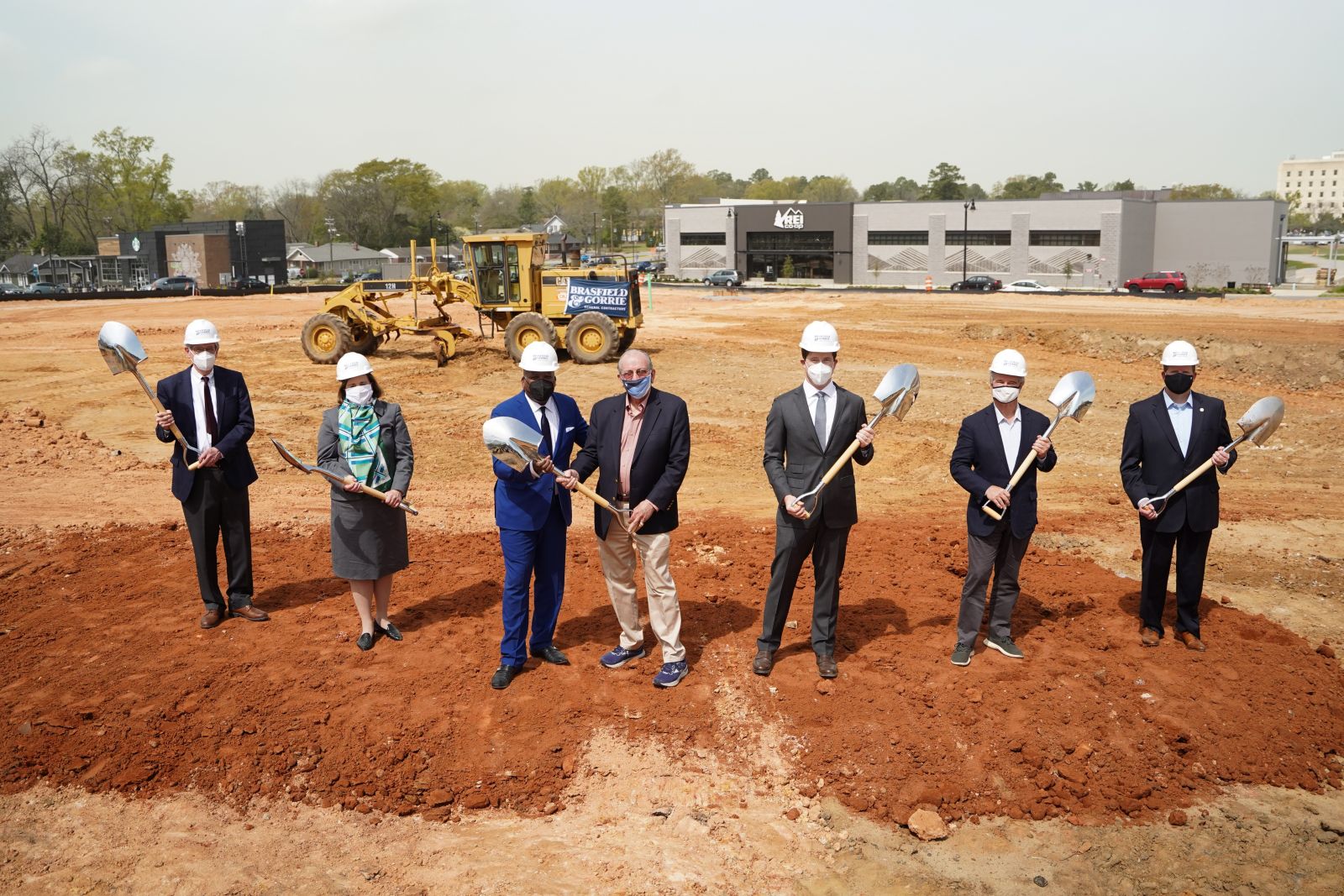 As Columbia city officials joined the president of Greenville-based Hughes Development Corp. to break ground on the newest addition to the BullStreet District, Hughes paused to appreciate the turning of the dirt as well as the tide of 12 months of pandemic-related uncertainty.

“It’s humbling. It’s refreshing,” Hughes said. “It’s nice to be able to step back for a second and take a win, have a little time to celebrate a milestone like this. We haven’t had a lot of these over the last 12 months, so doing this with the team we have assembled and all the people here is really special.”

Hughes Development, master developer of the 180-acre BullStreet project, is next overseeing the construction of the WestLawn building, a 79,000-square-foot, mass timber office building that will be the first of its kind in Columbia. Slated to open in April 2022, the five-story building will house Columbia law firm Robinson Gray Stepp & Laffitte, which will occupy more than 29,000 square feet on the top two floors. Hughes is also the leasing agent for the structure, which will include four floors of Class A office space with a bottom floor dedicated to retail.

Birmingham, Ala.-based Brasfield & Gorrie, the WestLawn building contractor, has been in on the ground floor of BullStreet development, having worked on commercial office space pioneer the First Base Building, a 108,541-square-foot building adjoining Segra Park which opened in April 2016.

“It’s a lot nicer to be out here right now,” Ben Barfield, Brasfield & Gorrie vice president, said. “When we came in and we were doing the First Base Building with Hughes Development as well, it was brand-new. There was nothing out here. It’s really good to be back right now with Hughes Development and build on what looks like a thriving area compared to where we were the first time when they were just breaking ground on it. It’s a lot of fun.” 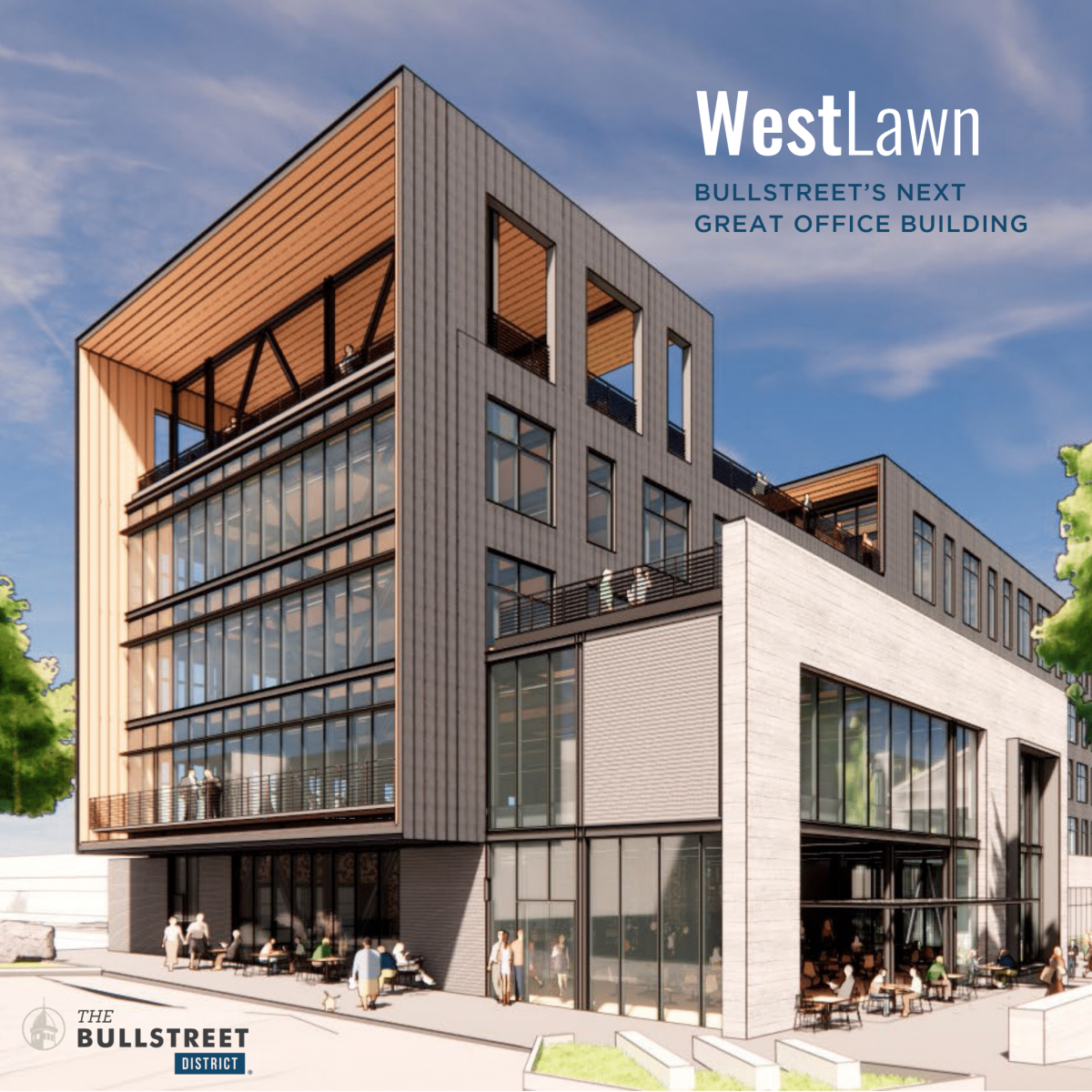 The WestLawn building will be made of cross-laminated timber, a renewable commercial building material invented in the 1990s that sequesters carbon and reduces reliance upon traditional construction materials such as concrete and steel as well as labor costs. It will be the first private, mass timber office building in South Carolina, Hughes said, and will join less than 400 in the U.S., including the first built in Montana in 2011.

Its 10-foot windows will maximize natural light in the building, located across from REI Co-op, BullStreet’s first national retailer which opened last summer, and behind the newly opened Starbucks.

“It’s almost like a kit of Legos,” David Crabtree, design leader for Chicago-based architect Perkins & Will, said. “In some ways, it’s extraordinarily simple. A smaller team of people can put it together. You can put up a whole building with five or six people on the structural systems side. And interestingly, while it’s new, it’s actually extraordinarily old. People have been building in timber for thousands of years. We have temples in China and Japan that are 2,000-year-old buildings.”

Crabtree said the design, including wood floors and ceilings, will aim to capture a feeling of history.

“It brings some of the craft of the Carolinas and the history of our mill buildings and things like that in a new and modern way,” he said.

In remarks before shovels hit the dirt Thursday, Columbia Mayor Steve Benjamin lauded the “momentous announcement” he said continued the momentum that has been building at BullStreet, first announced as an ambitious mixed-used development in 2015. The WestLawn building will join a newly opened senior living facility, townhomes in their second phase of development and the Babcock Building, currently undergoing a $55 million renovation into luxury apartments slated to welcome residents next year.

“When we started this project, we knew a site of this size, it would take a long time,” Hughes said. “We’ve always said 20 years we think is a reasonable timeline, and everyone knows over a 20-year period, you’ve got to be ready for at least one if not two economic recessions, and you don’t know what’s going to happen in the macro environment. Never could we have predicted a pandemic, but we were prepared for setbacks along the way, and that’s really helped.

“The flexibility that we had in the plan, being ready and able to adapt quickly, was something that we talked about early on. … We try really hard not to get too high on the highs and not to get too low on the lows and stay steady, continue doing what we know how to do, and hopefully it all pays off in time.”