Al Parish is appealing to the U.S. Court of Appeals for the Fourth Circuit for a shorter prison sentence.

In court documents filed Jan. 20 and yesterday, the former economics professor and investor argued that his sentence of more than 24 years is out of line with sentences given to defendants in similar fraud cases. He asked the appeals court to send the case back to district court for re-sentencing.

Parish asked for a maximum sentence of 74.4 months, or about six years, instead of the 292-month sentence he began serving last summer at a federal facility in Butner, N.C.

The documents were filed pro se, meaning Parish is representing himself. 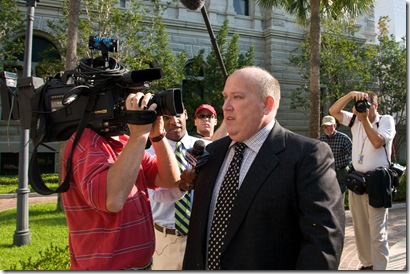 The former economics professor used a multiple regression model to make his case. He analyzed 39,114 fraud cases that occurred between 1996 and 2006 using data from the University of Michigan Inter-University Consortium for Political and Social Research.

Parish said the model shows his sentence is “disparate” compared to similar cases and “greater than necessary,” both violations of federal sentencing laws.

If the 39,114 fraud cases Parish analyzed are ranked by amount of loss, Parish said his case ranks 155th. If ranked by length of sentence, his case is seventh.

Parish cited several specific fraud cases with losses greater than the $66 million of investors’ money he lost. He also said the court should have waited until his assets were sold to total a loss amount.

Other factors Parish cited were his serious heart condition, his absence of a criminal history and his cooperation with the court.

Parish, who taught at Charleston Southern University and was regarded as a local expert on the economy, pleaded guilty to three counts of investment fraud last year. About 600 people lost money in his Ponzi scheme.