Painter, who grew up in Spartanburg, remembers helping his father, William Painter, at the community bank where his dad worked.

“Banking is something I have done my whole life,” said Painter, recently named the S.C. Banker’s Association 2018 Outstanding Young Banker. “It’s something I gravitated towards and I enjoy doing.” 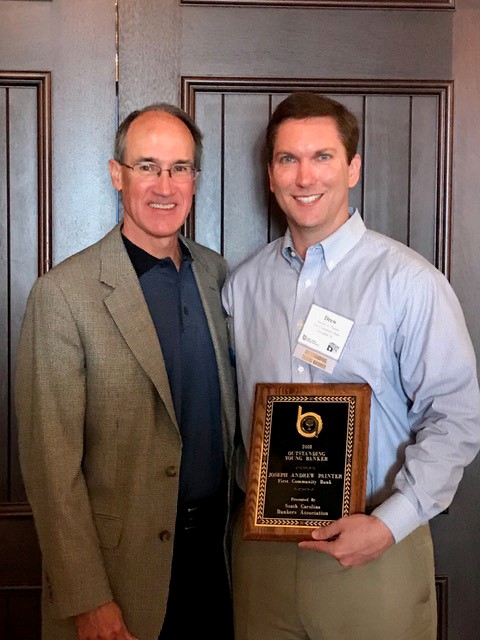 William Painter’s 40-year banking career included stints as president and CEO of First Federal of Spartanburg and on BB&T’s S.C. board of directors after a merger.

“I learned so many lessons from my father,” said Drew Painter, the Columbia regional market president at First Community Bank. “When he was working, his goal was to treat everyone the same. I learned everyone matters and everyone deserves respect.”

Drew Painter joined First Community Bank in 2003, soon after graduating from the University of South Carolina with degrees in finance and marketing. While he felt confident following in his father’s footsteps, he did not expect the honor he received during the banking association’s annual meeting on June 11.

“I was in shock,” he said. “I found out about five minutes before they gave me the award. Standing in front of nearly 400 of my peers and people I look up to in the industry was an amazing feeling. When you look at the past recipients of the award and realize what they have been able to accomplish in the state … it’s just amazing.”

“It is such a pleasure to work with someone of Drew’s character and ability,” Crapps said in a news release. “We are so proud to see his work recognized on a statewide platform.”

Drew is also a graduate of the Greater Columbia Chamber of Commerce’s Leadership Columbia program and the South Carolina Bankers School, where he serves on the board.

While appreciating the recognition of his individual work, Painter said he would not have won without his colleagues.

“So many people help me with my job. I would not be where I am without them,” Painter said. “It’s an honor to represent the bank, but we have a great team. They deserve this just as much as I do.”

Painter is excited to witness even more growth in the future.

“I’m just fortunate to be in Columbia, and I want to continue to do the best work I can,” Painter said. “This recognition just reinforces that our team is doing the right things.”