Although it won’t be at the pace the state’s economy has been growing in the past decade, an economic uptick is expected to continue into 2020, economic experts at the University of South Carolina say.

The university’s Darla Moore School of Business hosted the 39th annual Economic Outlook Conference Tuesday at the Harris Pastides Alumni Center in Columbia. Every year, economists conduct research to predict the direction the state’s economy is expected to take in the coming year.

“The outlook is looking very good,” said Doug Woodward, director of the Division of Research at the Moore school. 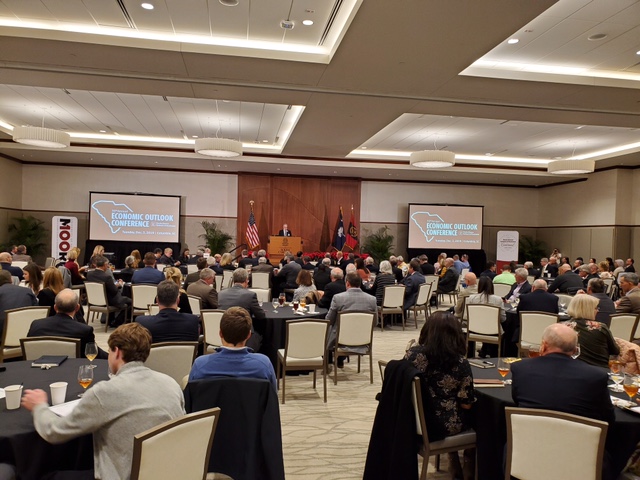 Woodward said consumer activity and a strong labor market have been driving the continued economic expansion. The state’s 2.6% unemployment rate as of October is the lowest since the record was kept in South Carolina and is a full percentage point below the national average. The rate is expected to remain constant through 2020.

In addition to continued consumer spending, Woodward said people are also saving money, which could help when the economic activity starts to decline.

“It’s because wages themselves are growing and that’s why they consume and can save at the same time. We haven’t seen anything like this, in my lifetime, I don’t think,” he said. “I won’t say there aren’t some potential negatives out there, but this is about as good as it gets: a healthy consumer sector, and it’s benefitting all parts of our state right now.”

Factors that could slow economic growth, said research economist Joseph Von Nessen, are uncertainty regarding international trade issues and a slowdown of activity resulting from the federal Tax Cuts and Jobs Act of 2017.

“In the face of economic uncertainty and these economic headwinds that we’ve seen in terms of these ongoing trade negotiations and the slowdown in global growth, South Carolina’s economy has continued to do well this year,” Von Nessen said. “We’ve seen broad-based growth across most industrial sectors. Every county in South Carolina has seen positive job gains. We’ve seen increases in some wages across the board and the best labor market in a generation.”

Von Nessen and Woodward expect job growth to slow to 1.5% in 2020. In the last two years, jobs grew at an average of 2% over the previous two years.

Von Nessen used the word “resilient” to describe the state’s economy in 2019.

“We haven’t escaped the economic headwinds unscathed. So South Carolina has seen slower growth in 2019 overall, and we expect that to continue into 2020,” he said. “Slower growth, but positive growth. We do not see a recession in 2020, although a recession’s more likely than it was a year ago because slower growth means we are more vulnerable to any shock.”