An area of North Charleston that hasn’t had a grocery store for more than a decade could have one as early as next year if negotiations go according to Mayor Keith Summey’s plan.

Residents of the mostly black, low-income Chicora-Cherokee neighborhood have not had a nearby grocer since Winn-Dixie closed its store at the Shipwatch Square shopping center in 2005. 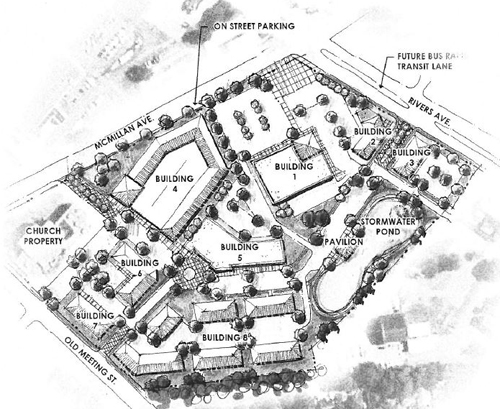 Produce and some household goods are sold at a small, nonprofit neighborhood store called Fresh Future Farm, which was created by nearby resident Germaine Jenkins. But Summey has continued to push for a national grocery store to locate in the area, which is classified as a food desert by the U.S. Department of Agriculture because of the lack of access to fresh food.

Earlier this year, the city requested proposals to purchase and redevelop the 17.96-acre former Shipwatch Square property at 3655 and 3685 Rivers Ave., at the corner of McMillan Avenue. Greenville-based Appian Investments I LLC, which is an investment pool made up of NAI Earle Furman employees, was the only prospective buyer.

“This is something we’ve been fighting for for a very, very long time, and I’m just very pleased to see that it’s finally coming to fruition,” Summey said.

The Finance Committee voted unanimously to allow Summey to negotiate a purchase and sale agreement with Appian. The agreement will need to be finalized by the committee and then approved by City Council; Summey hopes that will occur by the end of the year.

Summey said the company is looking to buy the property and build retail, office and multifamily residential units, as well as a grocery store of at least 25,000 square feet, which will be a requirement of the contract. The mayor said the company asked him not to publicly release the name of the grocer that would move into the site.

“They’re extremely serious about this project, and they want to move forward as quickly as possible,” he said. 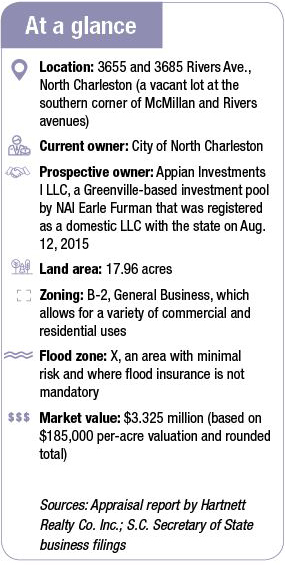 The city has spent about $5.5 million — some of which was federal grant money — to demolish the buildings that once sat empty on the property and clean it up in preparation for the sale.

“This is one of those locations you don’t look to turn a profit on,” Summey said. “You’re looking to steer redevelopment of that area and give it an opportunity to come back and enhance the quality of life of the folks that live in that area.”

Earlier this year, Summey was so desperate to get a grocer in that spot that the city offered up to $1 million over a five-year period to help offset any losses for the store. The city is not offering any such incentives to Appian; the mayor said he now doesn’t believe there will be any losses, because a grocery store is in such demand.

“We’re interested in just getting the grocery store there,” he said. “We’re sure it’s going to be a success.”

Appian will be eligible to receive some tax reimbursement for any public infrastructure it adds since the property is within a tax increment financing district.

“Like if they put a road through, when they get on the tax rolls, that money can actually go to repay them for the construction of that road,” Summey said. “It can pay for water. ... Anything that’s public. That’s the whole purpose of the TIF.”

The money the city receives for the property must be used in the same general area, because the federal grant money was first used on the site, Summey said. Areas near Shipwatch Square — like the former Chicora Elementary School property, which the city owns, at the corner of Success Street and Chicora Avenue — could be redeveloped using the funds, he said.

Jonathan Good, who is the CEO and broker-in-charge of NAI Earle Furman, is also listed with the S.C. Secretary of State as Appian’s registered agent. He did not return messages seeking comment.

Summey said the amount of money the company will invest after it has purchased the property has not been discussed. The mayor said he’s also unsure how much office and retail space will be built and whether the housing units will be for rent or for purchase.

“If they create, in which they are talking about, some residential in the area, we think it would be workforce housing, which is much needed but would really be an enhancement to that general area,” he said.

The county is also in the process of revitalizing the Cooper River Memorial Library on the property neighboring Shipwatch Square, at the corner of Rivers Avenue and Dorchester Road, according to county spokesman Shawn Smetana.

Summey said he thinks the county could build office space adjacent to Shipwatch Square, but Smetana said the county is still looking at all its options. If both projects commence, Summey predicted the area between McMillan Avenue and Dorchester Road could spark additional redevelopment along Rivers Avenue.

This story originally appeared in the Oct. 3, 2016, print edition of the Charleston Regional Business Journal.