Montgomery Building is open for business

One of the tallest buildings in Spartanburg is open for business.

“Today is a day that a lot of people, for a long time, never thought would come. A Spartanburg icon is back and that’s worth celebrating,” said Allen Smith, president and CEO of the Spartanburg Area Chamber of Commerce, during a grand opening event in December. “This building is indeed representative of downtown Spartanburg’s rebirth, revitalization and resurgence.”

Smith said when he first moved to Spartanburg four years ago, he participated in a planning retreat and posed this question: “If you had $50 million, how would you use it to move Spartanburg forward?”

“One of my board members said, ‘My first priority would be to demolish that albatross called the Montgomery Building,’” Smith said. 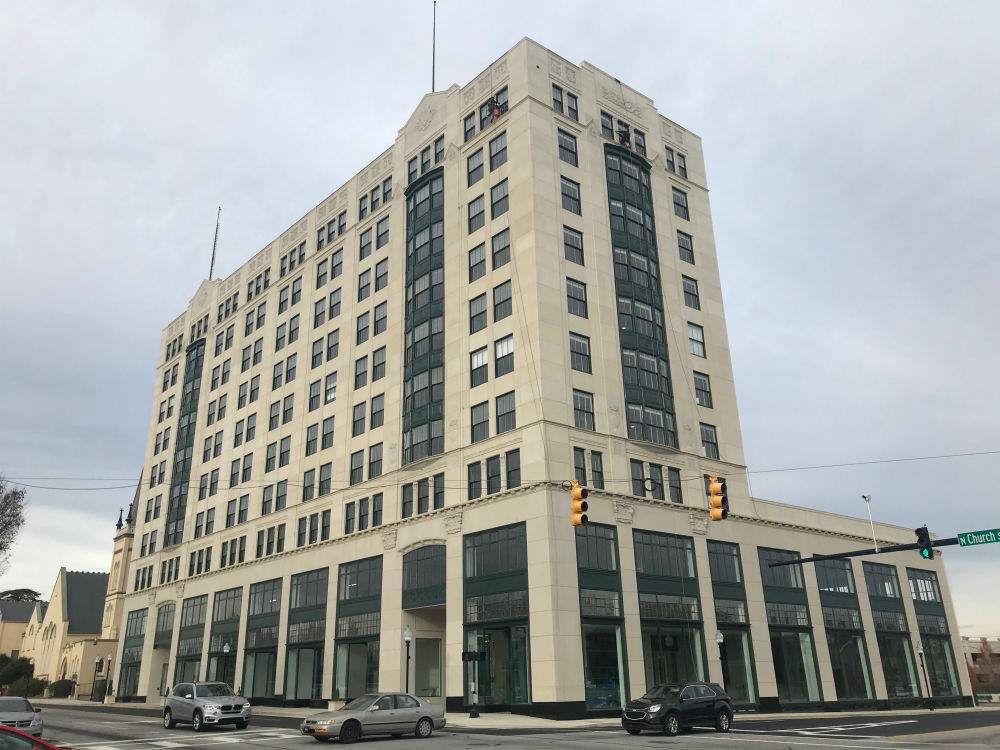 A number of developers looked at the property over the years. Ultimately it was Tom Finnegan and his partner James Bakker, both with BF Spartanburg LLC, who saw the possibilities in the building that once was home to The Carolina, a theater that had a week-long engagement of the movie “Gone with the Wind” six weeks after it premiered in Atlanta, Ga. The Carolina hosted live performances as well, including a visit by Elvis Presley in February 1956 to play the 600-seat theater.

“I remember when we first walked through here, the ceiling was falling in, there was trash everywhere, plaster was falling. Just to be able to recreate this and bring it back together has been quite a journey,” Bakker said.

“It’s really hard to believe if you had seen this two years ago. This place just looked like a complete disaster,” Finnegan said.

The Montgomery Building continued to be a popular business address until the 1980s, according to the National Register of Historic Places. As the textile industry struggled, those offices closed and tenants began vacating the building. Businesses began building their own buildings or renting spaces in stand-alone buildings. During the 1990s and into the new millennium, tenants continued to vacate the Montgomery Building. WSPA housed some its offices and a satellite broadcasting studio in the building into the early 2000s.

The newly-renovated Montgomery Building features apartments for rent on the fourth through 10th floors. Sidewall Pizza Co. and Little River Roasting Co. are among the businesses moving in.

“Building downtown Spartanburg is the ultimate team sport. We are fortunate as a city to have partners that recognize the importance of downtown development and are with us every step of the way,” said Chris Story, Spartanburg city manager, during the grand opening event.

I am very excited about the renovation of the Montgomery Building. My father Bob Stoddard practiced law from1947-1960 there so I have a lot of fond memories of that era and getting my haircuts in the barber shop and malts and sandwiches in Allen’s Pharmacy and later. Darrell Floyd’s Sandwich Shop!

I absolutely loved reading the history of the Montgomery Building! Bringing it back to its grandeur was so insightful on the developers part. Thank you for making Spartanburg the great city we all know it is!