Drive across Lake Hartwell out of Clemson and you can’t miss the activity going on near Hartwell Village. Construction of Lakeside Lodge Clemson began in August. And though rain slowed progress a little, work is expected to be finished in late October.

Lakeside Lodge Clemson is a $30 million to $35 million condominium project on Lake Hartwell that features 118 residences with a mix of studio, two-bedroom and three-bedroom condos. Seventy have already been purchased, according to Tajh Boyd, head of sales for Lakeside Lodge Clemson. 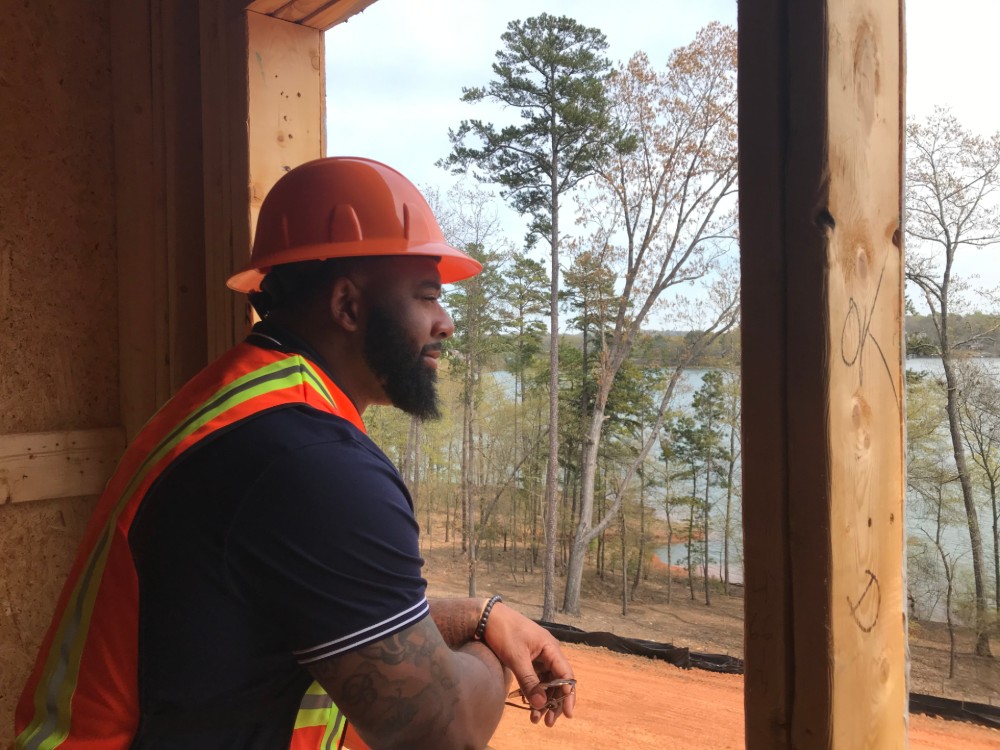 “For some people, seeing is believing,” Boyd said. “I personally feel like I undersold it initially. I thought I was a visionary, but when they started putting these pieces together, it blew me away and took it to a whole new level.”

Boyd, along with the others in the Lakeside Lodge office, had seen renderings, along with a model of the lodge. “But it’s a difference between Lego pieces and real pieces when you come out here and see it coming together,” he said.

Lakeside Lodge Clemson is a combination condominium ownership opportunity along with rental options. An owner can choose to rent out an entire unit or one bedroom. Condo owners will have the option of generating income while they are away by utilizing the resort’s professionally managed short-term rental program to lease their units for the night, weekend or week at a time. Southern Resort Group in Asheville will manage Lakeside Lodge Clemson.

“Most people want to understand how it operates,” Boyd said. “They ask how they can be sure their room will get utilized. There’s a whole process and mechanism behind that.” 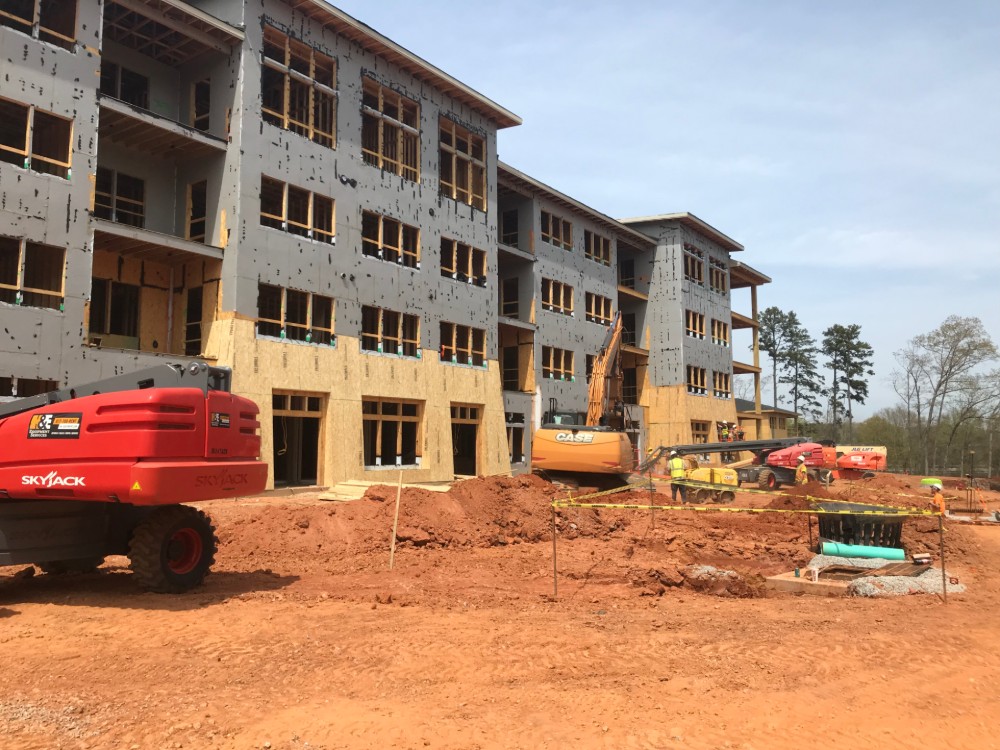 “Owners don’t have to rent their condo, but I believe the rental program makes sense,” he said. “The way it’s structured, everyone will get their fair shake in it.”

Information on the process is available on the Lakeside Lodge Clemson website.

During a tour of the construction site, Boyd pointed out the site’s closeness to Lake Hartwell, planned green areas, the pool area, the site of a 50-yard football field, and the fact that Clemson University’s Death Valley football stadium is visible from the site.

Tajh Boyd is a familiar face and name around Clemson. The former Clemson Tigers quarterback said he has found a way to give back to a community that has been good to him.

“Clemson has offered us all something that we could never have imagined. We want to continue to build on that and give something back,” he said of himself and his partners that include Leighton Cubbage and Steve Mudge of Allie Capital LLC, who also are former Clemson Tigers football players. 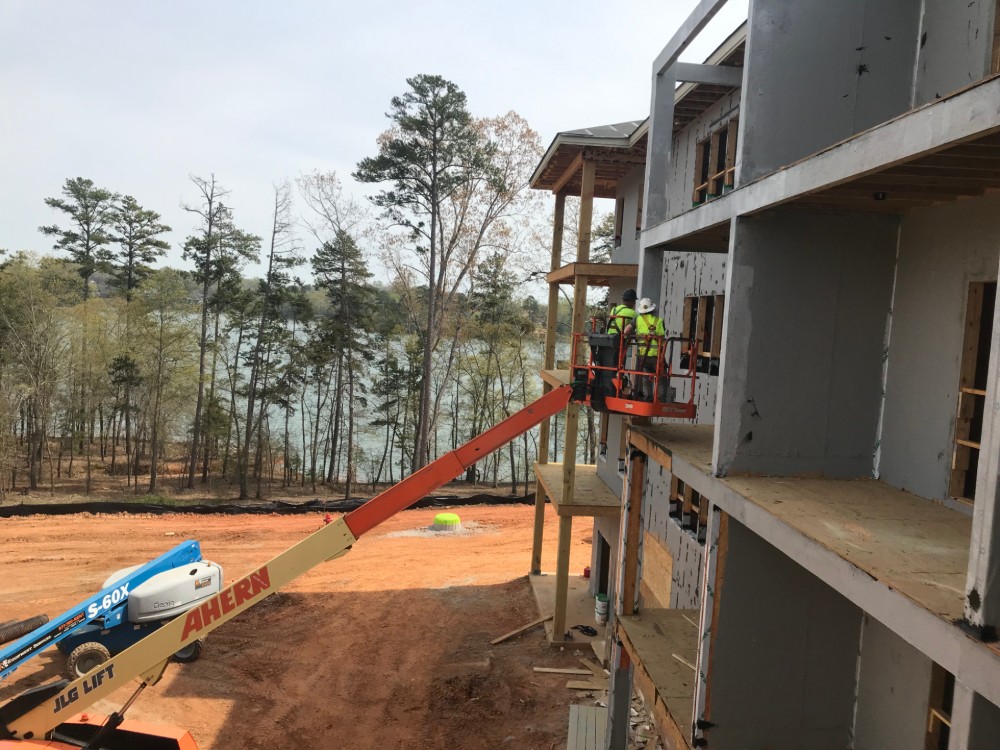 Boyd said two fundamental pieces of the Clemson community were shut down and torn down over the years that “really zapped some emotion out of people and left a hole that someone needed to fill — the Clemson House and the Holiday Inn.

“Steve and Leighton knew this and knew what people wanted and they wanted to create something that was going to last forever. This is that piece here,” Boyd said.

The work site is a hub of activity, with dirt moved and beams placed. In either a sign of his frequent visits to the site, his status as a Clemson star quarterback or his friendliness — or a combination of all three — workers pause to say hello to Boyd, shake his hand or touch base on work or family news.

A full service farm-to-table restaurant and bar, which will be open to the public, is planned for Lakeside Lodge Clemson.

The project is being built by Sherman Construction of Piedmont. The project architect is Goodwyn, Mills and Cawood, which has an office in Greenville. Developers include Mudge and Cubbage along with Southern Resort Group and Sundog Development Co.