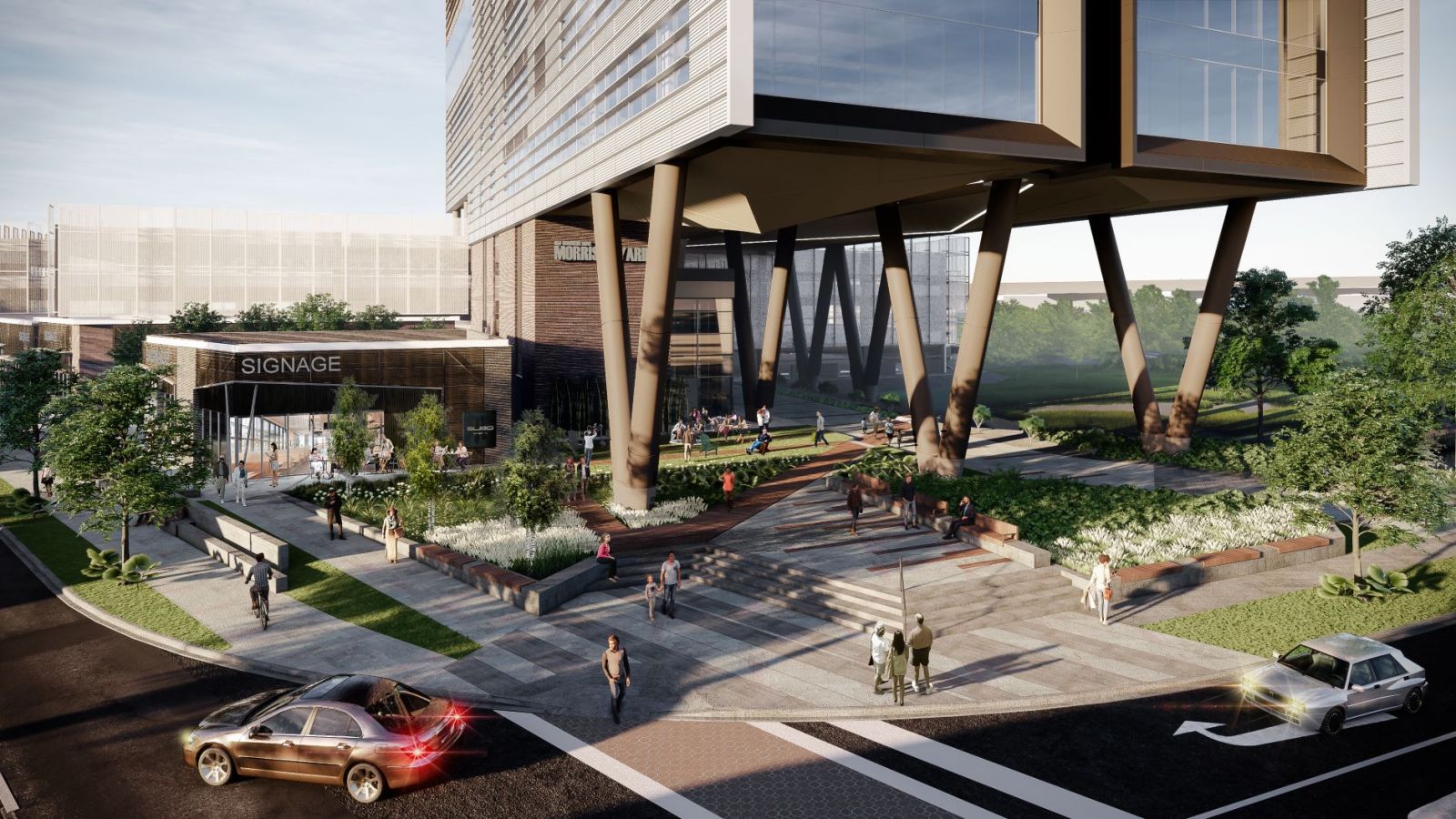 At a key entry point to the city of Charleston comes an office building designed to harken to the nearby port and the bridge it sits beside, rising from the ground like a cargo container being lifted by a gantry so that passersby can enjoy the river views from beneath it.

Construction of the $42 million, 12-story Morrison Yard Corporate Office Tower began in mid-January at 850 Morrison Drive at the foot of the Ravenel Bridge. It will offer 148,000 square feet of Class A office space

The Tower, being built by Balfour Beatty of Charlotte for Mount Pleasant-based Origin Development Partners, Mixson Properties of Atlanta and Charlotte-based The Keith Corp., is part of a larger development that includes a 10-story, 386-unit apartment project at 838 Morrison Drive. 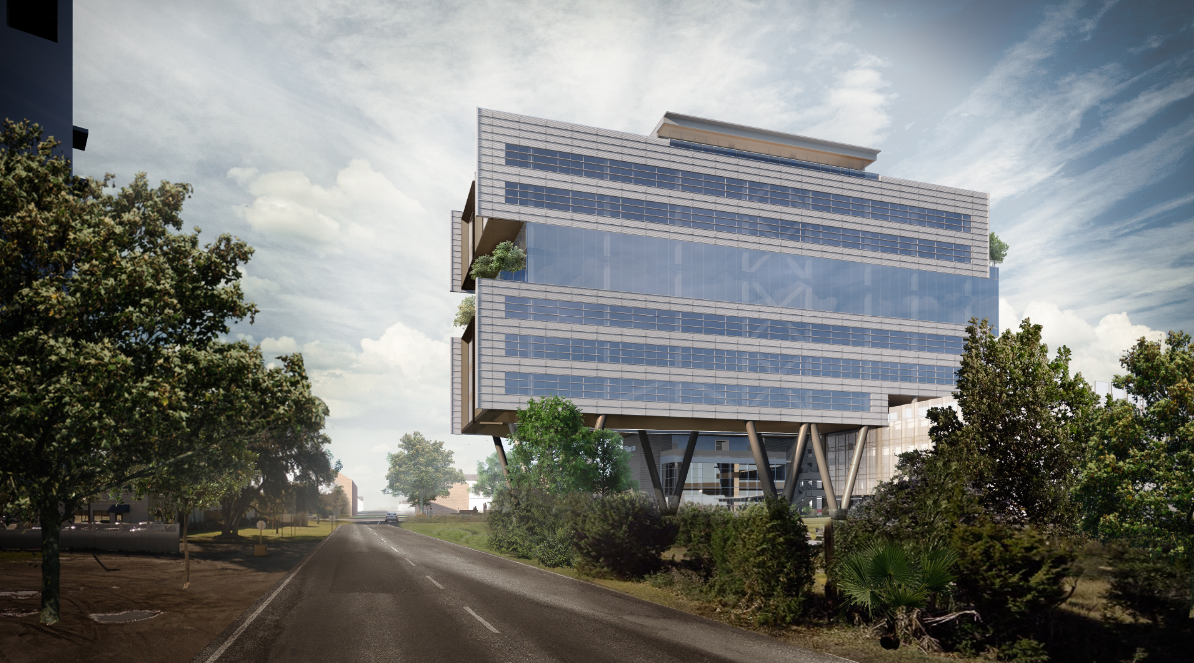 Approval of the unusual structure from the Board of Architectural Review followed rejection of the first, more traditional, design submitted by the developers, said Jeff Mixson of Mixson Properties. The BAR directed the parties to design something unique that reflected the building’s maritime location in the trendy Nomo area.

The height of the building, the largest office building on the peninsula, according to the principals, was fueled by sustainability credits earned in the design of the structure through the city of Charleston RISE program.

Bathrooms and kitchens were placed on the sunny west side of the building, reducing the amount of HVAC required. A rain garden will collect storm water and return it filtered to the adjacent wetlands. Electric vehicle charging stations will be placed on the 377-vehicle parking deck. A “bike farm” will facilitate bicycle storage for those who commute sustainably.

The lowest offices will sit 50 feet off the ground, affording all tenants a front row seat on the Cooper River. A courtyard below the tower will allow space for the community to congregate and maintain a view of the bridge and waterway.

The project is intended to be friendly and welcoming to the neighborhood as well, by maintaining visual access to the water and improving sidewalks, the bus stop and rail spur around the buildings.

This scale and uniqueness of design would be disharmonious with the historic downtown area, but is appropriate for the upper peninsula, say city planners and preservationists.

“It is a location that can support more cutting-edge architecture because it is not adjacent to some historic structure. With the backdrop of the Cooper River Bridge, which is a very contemporary structure, it makes sense to have a design like that,” said Christopher Morgan, city planning manager for the City of Charleston.

Since 2015, the city has approved development of 1.2 million square feet of office space in an effort to diversify its employment base beyond hospitality and health care.

“That is unprecedented in the city’s history,” Morgan said.

Many of those projects are in the Upper Peninsula zoning district where larger, more innovative designs are encouraged.

The design of the Morrison Yard Office Tower includes seven floors of offices, a penthouse deck of events and 40,000 square feet of retail space in a separate building, with an expected mix of tenants similar to those at the Cigar Factory just south on East Bay Street, Mixson said.

A four-floor parking garage will sit adjacent to the tower with direct access to the offices.

The Keith Corp. invested in the project in mid-2020, says company CFO Ken Beuley, because it believes in the Charleston market and the uniqueness of the Morrison Yard project. The company has developed other industrial and office projects in and around Charleston.

Covid has accelerated the move to remote work, but the developers remain undaunted. “If it were a 60- or 80-story building, that might be a problem,” said Beuley. He believes companies will return to working in offices once a vaccine is widespread, but they will use that space differently.
“The only way to get creativity is when people are in the office. Densification of the office will change. People might be in the office 3-4 days week but there will be more space per person,” he said.

That is exactly the formula employed by the tower’s first tenant, the Charleston office of Charlotte-headquartered law firm Parker Poe Adams & Bernstein LLP.

Ashley Cooper, managing partner of Parker Poe in Charleston, says the firm is moving from the Bank of America building at 200 Meeting St. because it wants to reconfigure offices around clients rather than attorneys and staff. The new space, which is still under development, will dedicate its 12,000 square feet less to staff offices and more to meeting spaces.

The central location and beautiful views were a draw as well.

“It is a combination of a place where attorneys and staff enjoy coming to work and addressing changes in our ability to deliver a product to our clients,” he said.

Parker Poe remains the only announced tenant so far, but the firm is not concerned.

It did its due diligence before signing on and determined that the developers have sufficient revenue to justify financing from Pinnacle Bank with just Parker Poe’s lease.