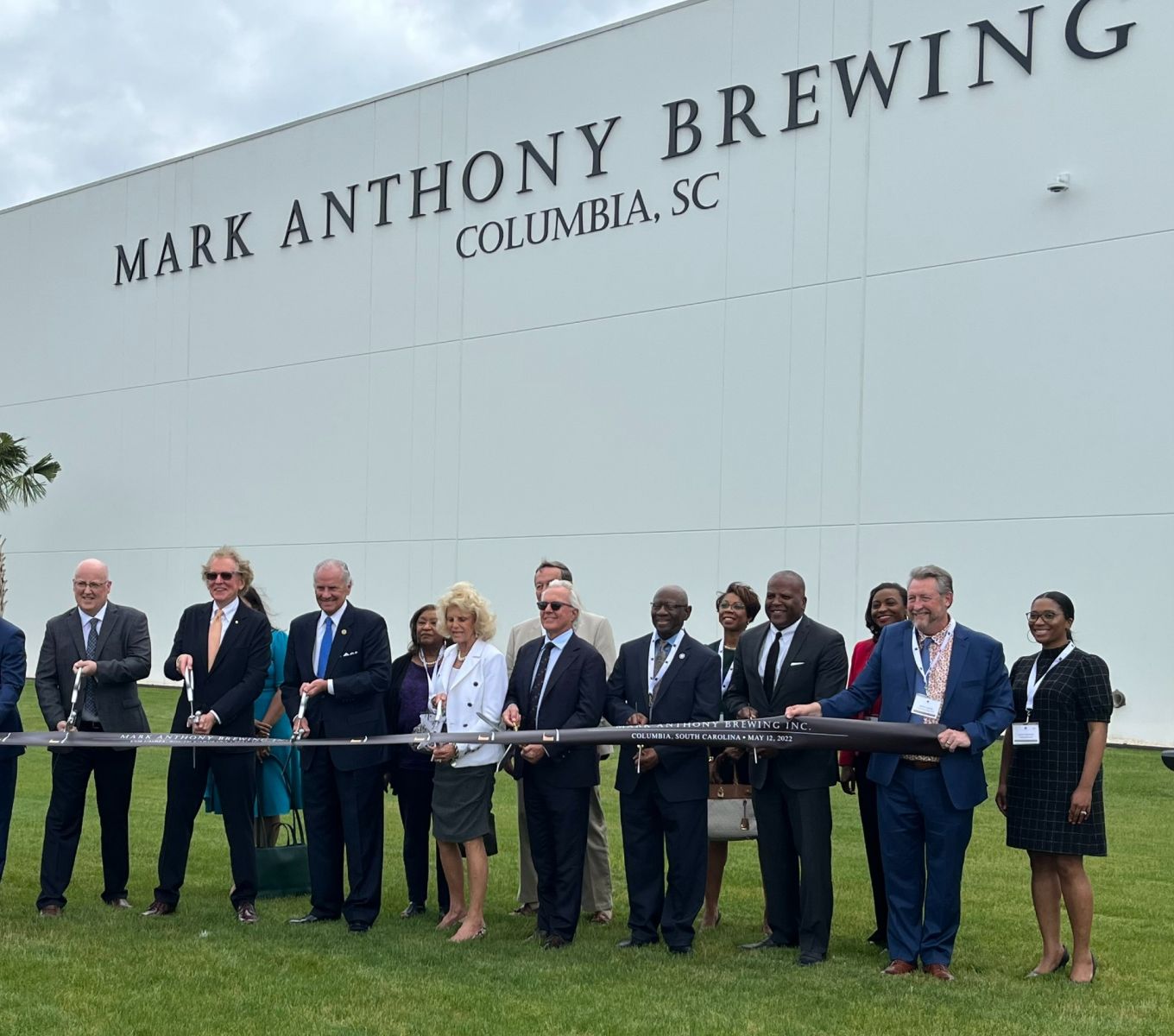 After a whirlwind production schedule that brought a $400 million, 1.3 million-square-foot state-of-the-art production facility online in a year, the stakeholders in Mark Anthony Brewing’s Shop Road operations took a moment to acknowledge their accomplishments on Thursday.

“The magnitude of this project is breathtaking,” Mark Anthony founder and CEO Anthony von Mandl said. “Twenty-seven miles of stainless steel piping, 33 miles of steel roof framing and racks, 56 enormous stainless steel tanks, 126,000 tons of concrete, more than 600 people on the site during the peak of construction during the height of COVID. … Nothing about this project was normal. This was to be the most complex, advanced facility of its kind in the world, purpose-built with technology that had to be designed as we were building.”

After selecting Columbia from among 18 locations in five states in September 2020, Mark Anthony and its partners, including general contractor Clayco, hit the ground running.

Within 10 days of the facility’s Nov. 30, 2020 groundbreaking, Clayco poured the first concrete slab, and the project was off, forging ahead through pandemic protocols and a step ahead of supply chain disruptions.

“Four weeks later, the first structural and roofing steel was in place,” von Mandl said. “Had we started the project just one month later, we would have not been able to keep up with the steel required for the structural girders to keep going. If we tried to build the project today, it would probably take us two more years to get the steel.”

Within three months and 100,000 work hours, the facility’s exterior walls were erected. By March 2021, the roof was up, and “we had helicopters lifting 88 air conditioning units up to the roof in the midst of a driving rain storm,” von Mandl said. “Nothing was going to stand in our way, not even South Carolina occasional weather.”

Filtration equipment and 56 stainless steel brewing tanks arrived, put into place with the help of 46 laser-guided vehicles. The electrical substation, powered at a lightning pace by Dominion Energy, was activated. Front office furniture was installed, and test production runs began. In November 2021, the first salable case of Mark Anthony products — which include White Claw hard seltzer, Mike’s Hard Lemonade and Cayman Jack cocktails — rolled off the line and into of one 69 shipping bays.

“Ten years ago, the land that we stand on today was a tree nursery with about two or three employees,” Richland County Council Chair Overture Walker said. “This was made possible because my colleagues in Richland County made the commitment to invest in economic development with the aim of creating quality career opportunities for our citizens and growing our community’s tax base and attracting more industrial and commercial development.

“We didn’t allow concerns about taxes to stand in the way of delivering job opportunities that will pay a livable wage for many of our residents. Instead, we took a resourceful approach and used all the tools at the county’s disposal for leveling the playing field and competing with other regions for economic development projects.”

Ryan Coleman, director of the city of Columbia’s Office of Economic Development, told SC Biz News the Mark Anthony project is an example of what the county can accomplish when stakeholders work together. The facility was part of a record-setting $638.7 million in economic investment the county attracted in 2020, followed in 2021 by $359.6 million, the second-highest amount on record.

“It’s about (removing) those impediments as early on as possible, so that the barriers to a company saying no aren’t there,” Coleman said. “When you’ve got the ability to control the site, and you can give the company the infrastructure that they need to go forward, that’s how you get something like this to happen.”

Mark Anthony’s $490 million total investment included $10 billion in a system that captures and reprocesses all carbon dioxide created at the plant into carbonation for its beverages, $15 million in an advanced wastewater treatment system and $4 million in landscaping that includes more than 200 newly planted trees and a 29-acre employee park.

“We’re not done yet,” von Mandl said. “Our long-term vision for South Carolina will see even more investment, including expanding the footprint of our facilities in years ahead. I’ll leave those details for another day.

“This is a great day for Mark Anthony Brewing, the city of Columbia, the state of South Carolina. For me personally, it is a very significant moment. Thank you all for your commitment and believing in us. One final promise to the future Mark Anthony staff in South Carolina, and that is: We’ve only just begun.”