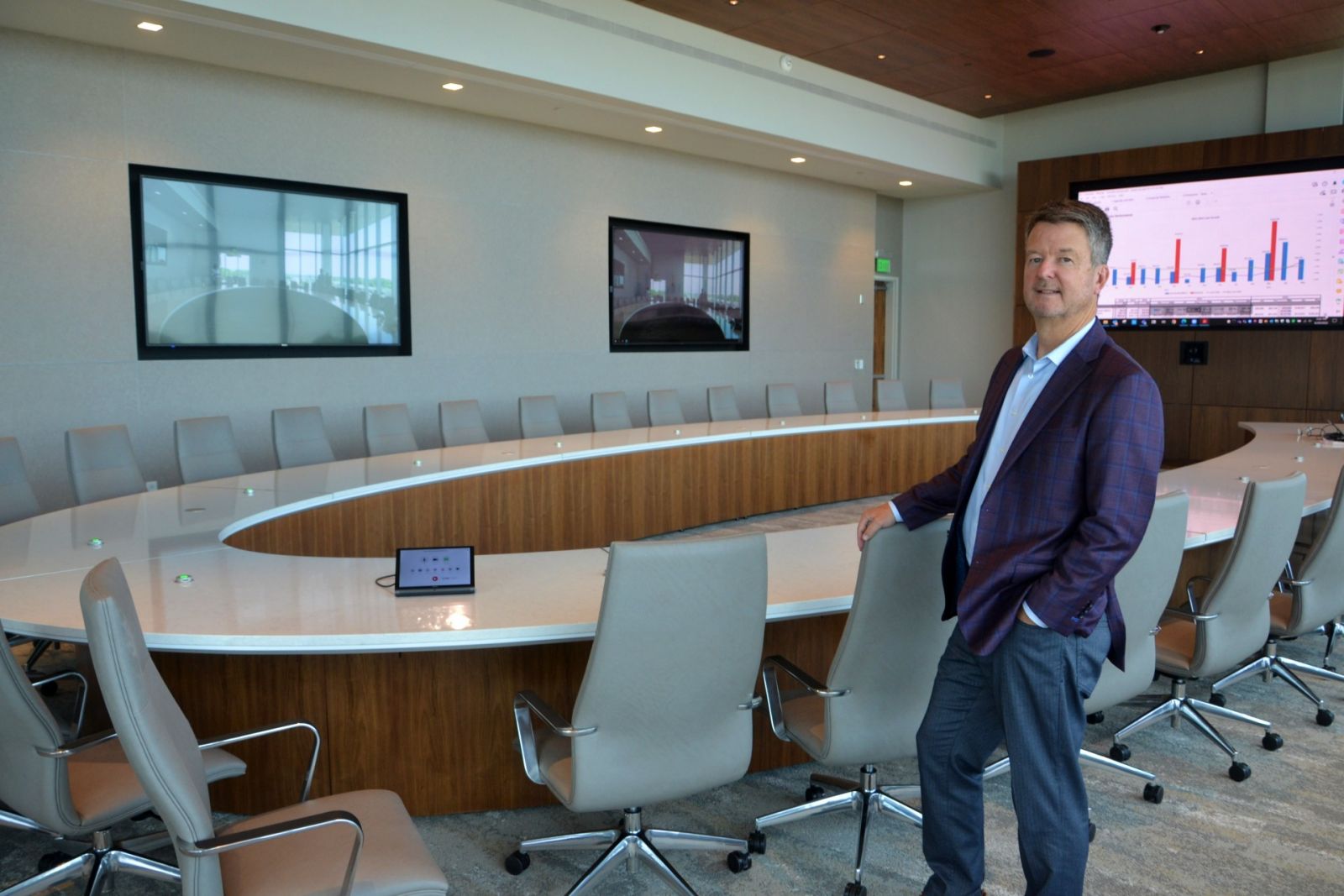 The first Southern First Bank building — a triple-wide trailer off Haywood Road — would fit in the corridors of their latest.

Employees moved into the new building on Verdae Boulevard at the intersection of Laurens Road about a month ago and officially opened the five-story structure on June 22. The building pulls off the rare feat of outperforming artist renderings, towering over the low-slung architecture of most of its neighbors and hinting about taking a complementary place in visions of the Verdae future.

For Southern First CEO Art Seaver, the opportunity — or really, the imperative — to build something new gave the bank a chance to show the world what it’s about. More important, to demonstrate to the community what it’s about and that it’s here to stay.

Seaver said traditional bank architecture is often cold and intimidating, and he wanted something different.

“When you come in I want it to be different — as in warm, welcoming, unintimidating,” he said. “I want it to feel like home, to feel progressive rather than feeling like the past.”

In one sense, Southern First’s past is really not that long ago.  The company opened the doors to its trailer with 14 employees on Jan. 10, 2000. In another sense, it’s been a long time because the bank thrived and survived through a different era. There were 94 banks in South Carolina in 2000 — 44 now — and it was pretty easy to start a new one. And many of the new ones seemed to be starting with a stockholder goal of being purchased eventually by a larger bank.

Southern First Bank was different from the beginning, according to Seaver, who was “35, with two kids and no money” when he took the lead in starting the bank.

“I wanted to start a bank because I love the privilege of being a banker,” he said. “I love serving, I love caring and I love making a difference.”

He wanted that bank to be committed to the community. And he wanted it to be a bank that stayed.

“A lot of people think you always have an exit strategy” when you’re a bank, he said. “I think mergers for the most part are tragic. Tragic for the clients, tragic for the team, tragic for the culture that’s been built. So if we can be one of the fastest growing banks and one of the highest performing, why would we sell? It would be the worst thing our shareholders could ever ask us to do.”

The Southern First shareholders have fared well. Their collective investment of $11.5 million is worth more than $350 million today, Seaver said.

“I put together a great board of directors and an initial team of 14 people,” Seaver said. “Four-hundred people in Greenville, in some form or fashion, were supportive enough that they provided $11.5 million in capital to start this bank. … To be honest we thought we could grow to a $200 million bank in about seven years but by then (sevenyears) we were a $500 million bank.”

The 14 employees have grown to 300 and Southern First became the largest bank headquartered in the state until United Community Bank recently moved its headquarters from Georgia to Greenville. Now operating in eight markets, Southern First is the fifth largest in the Greenville market, behind only the giants such as Wells Fargo and Bank of America. The company has been one of the fastest growing banks in the Southeast and recently earned the Raymond James Cup for community banks, named the No. 6 bank in its size category for meeting criteria like growth, quality and performance earnings.

“Most banks grow by buying banks and cutting costs,” Seaver said, “but we grow organically one client at a time. We’ve never bought another bank.”

The purpose of the new building, he said, is to create a great space for employees to work and clients to visit while providing room for the community. Greenville business Southern Pressed Juicery operates a location in the lobby, open to the public, even those who are not there to bank. And there is a lot of room for community events.

“I wanted the community to feel welcome here and so we built it so that the United Way can have meetings here, so the chamber can have meetings here. Other community groups can have meetings here,” Seaver said. “The purpose of this building, absolutely it will welcome our clients, but the purpose is as much about the culture of our team. It’s certainly a statement to the community, but the other thing is it’s going to help me recruit the next hundred bankers because I think people want to work for a company that seems progressive and doesn’t seem to be stuck in the past. So we’re 22 and a half years old now and (this building) is a statement about what the next 22 and a half years will be.”

Whatever happens in the next two decades, Seaver intends for it to happen with Southern First and its pineapple logo intact.

“Our company was built for longevity, and it was built from a client-first mentality,” he said. “We have a depth of leadership and a depth of a team. And so when people come into this building now there is this sense that we wouldn’t make the investment — which is significant — to create this new home if our belief and our confidence in the future wasn’t so high. And we’ve got 22 years of history to really back up our confidence.”