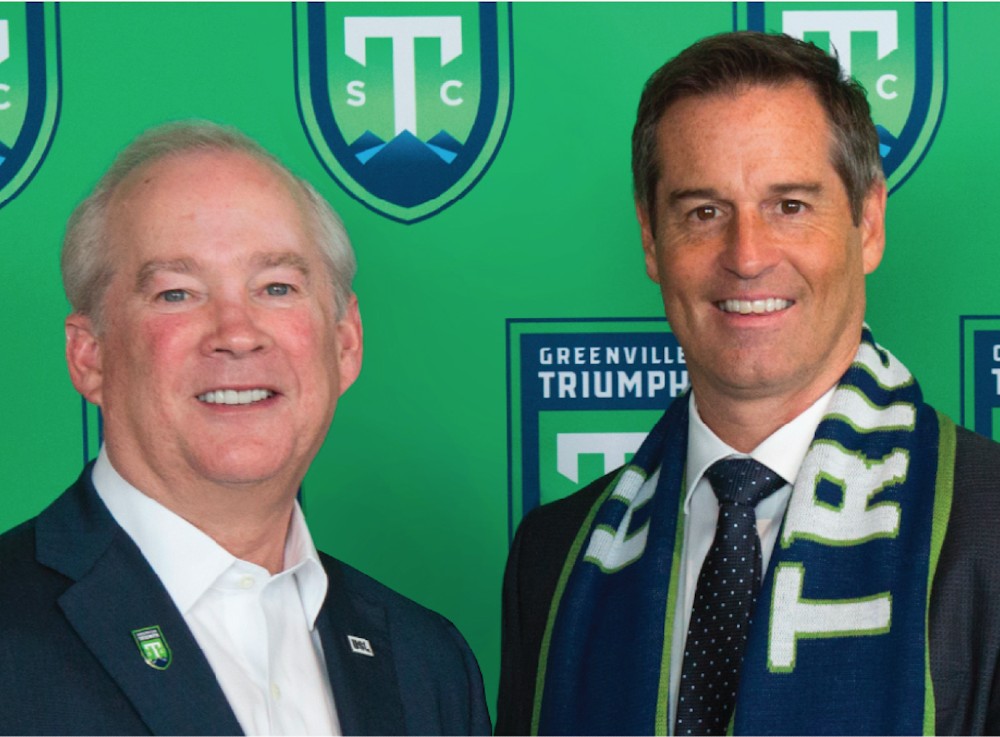 Endeavor is a coworking and meeting space on the fourth floor of 1 N. Main St.

The in-person event, sponsored by Fifth Third Bank and Joan Herlong & Associates/Sotheby’s International Realty, will feature a Q&A session between Erwin and Harkes as they reflect on the lessons and insights they have learned on the way to becoming friends and partners in the growth of the Greenville Triumph brand, according to a news release. The two leaders will talk about their values and philosophies about coaching, leadership and teamwork.

In addition to founding the Greenville Triumph, Erwin is the co-founder and former president of marketing agency Erwin Penland, the co-founder of Clemson University’s Erwin Center for Brand Communications, president of Erwin Creates, and founder of Endeavor. He has served as a leader in the community and the advertising industry through numerous board and commission roles including S.C. Special Olympics, the Governor’s Commission on Teacher Quality, Partnership for a Drug-Free America, American Association of Advertising Agencies, Boy Scouts of America and the Erwin Center for Brand Communications.

Harkes, 2020's USL League One Coach of the Year and a member of the U.S. Soccer Hall of Fame, is in his third season with the Triumph. He built the team from the ground up prior to season one. The University of Virginia alumnus joined the United States men’s national soccer team full time in 1988, earning 90 caps and competing in two FIFA World Cups (1990, 1994) as well as the 1988 Olympics. He was the first American to compete in the EPL and a six-time MLS All-Star selection. He served as head coach and director of football for FC Cincinnati in 2016 and has held coaching and technical director positions at the national and MLS academy youth levels, including the U.S. U-20 Youth National Team and for D.C. United's youth academy, according to the news release.

“John and I have learned a lot of lessons the hard way — and in my opinion, that’s the right way,” Erwin said in the release. “This event will be an ‘ask anything, nothing is off-limits’ kind of night. We are looking forward to it more than anybody.”

Proof of full vaccination against COVID-19, a positive antibody test or negative COVID-19 test (within the previous 72 hours) is required for entry. Networking will take place from 5-5:45 p.m., followed by presentation and Q&A at 5:45. The event will conclude with networking until 7:15 p.m. Seating is limited. Request an invitation at Endeavor@EndeavorGreenville.com

Endeavor is a membership-based coworking community for creative and entrepreneurial professionals, as well as corporate teams and business travelers.