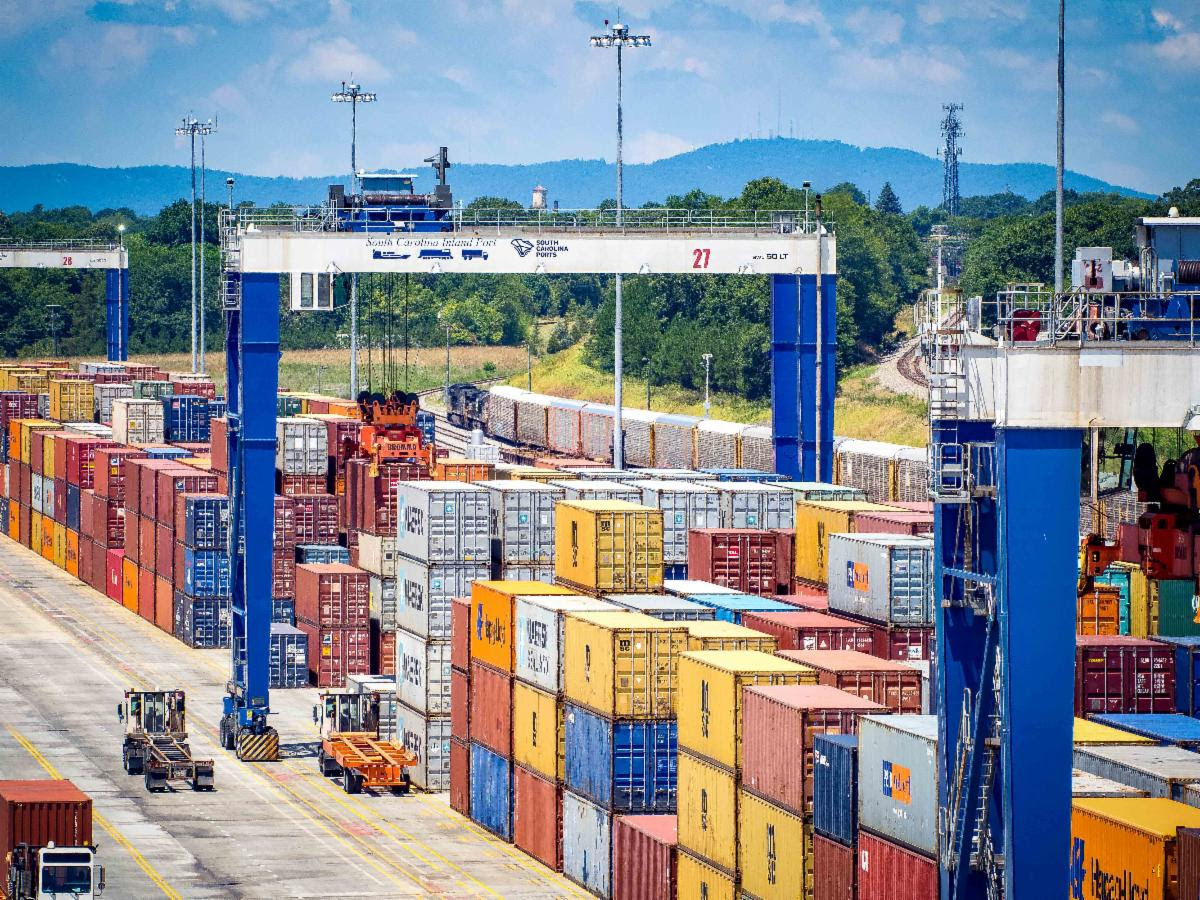 On the heels of opening of a new terminal in Charleston, the S.C. Ports Authority today announced plans to expand Inland Port Greer — a pair of developments drawing praise from some players in the manufacturing and logistics sectors.

The installation of Charleston’s Hugh K. Leatherman Terminal has already spurred one Upstate-based logistics company, Greer-based TA Logistics, to consider doubling or tripling his personnel over the next 12 months.

Swafford Transport and Warehousing, a logistics company with several foreign-trade zone warehouses within a few miles of the inland port, also has seen a sign of greater things to come.

Dusty Locke, vice president of the company’s operations, expects Charleston’s port expansion to attract some companies away from a Savannah port of call, thus making his trucking prices far more competitive with Inland Port Greer factored into the equation.

“If I were to send a driver from Greer to Charleston and back, that’s his day,” Locke said. “He can do one load. Now those containers can come in from the inland port from Charleston where they can’t from Savannah, and that same driver can get 10 containers in a day.”

That difference could alter consumer freight costs from — for example — $1,000 a container to $100, he said.

Today, after the S.C. Port Authority announced the expansion of Inland Port Greer, TA Logistics and Swafford Transport’s predictions could be one step closer to fruition with the promise of additional container volume and extended rail infrastructure. 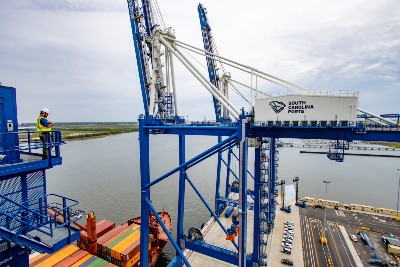 “The Leatherman Terminal provides more big-ship capabilities, cargo capacity and efficient operations for S.C. Ports,” Liz Crumley, manager of corporate communications for the S.C. Ports Authority told GSA Business Report in an email. “The additional capacity means more cargo can flow in and out of port terminals and inland ports. The efficient operations provide reliability and speed-to-market for customers needing to move imports and exports, as goods swiftly travel between Inland Port Greer and the Port of Charleston via overnight rail.”

With a $25 million grant from the Better Utilizing Investments to Leverage Development Fund, Greer’s inland port will expand with additional rail processing and storage tracks within the terminal that will expand the container yard to the east and west, according to today’s announcement.

The existing chassis yard will widen in response to the record rail moves reported this March, and new facilities for heavy lift maintenance and terminal operations will be added to the port’s roster of construction projects.

“This funding supports the expansion of Inland Port Greer, which has been a true success story for South Carolina, growing significantly every year since opening,” S.C. Ports CEO Jim Newsome said in the release. “We continue to invest in port infrastructure to handle more cargo for companies. Our strategic investments provide more capacity and efficiency, which attracts more companies to invest in our state.”

“S.C. Ports is a major economic driver for our region, with more than half of its $63.4 billion annual economic impact occurring in the Upstate,” Rep. William Timmons, R-S.C., said in the release. “Many companies, such as BMW Manufacturing Co. and Michelin, depend on S.C. Ports’ Inland Port Greer to handle their imports and exports. The expansion of Inland Port Greer will further enhance our supply chain, prompting more companies to invest in our region and creating more economic prosperity throughout the Upstate.”

More than half of S.C. Ports' $63.4 billion annual economic impact in South Carolina already occurs in the Upstate, according to the news release. John Lummus, president and CEO of Upstate SC Alliance, told GSA Business Report that means a $32.8 billion economic impact in just the Upstate. 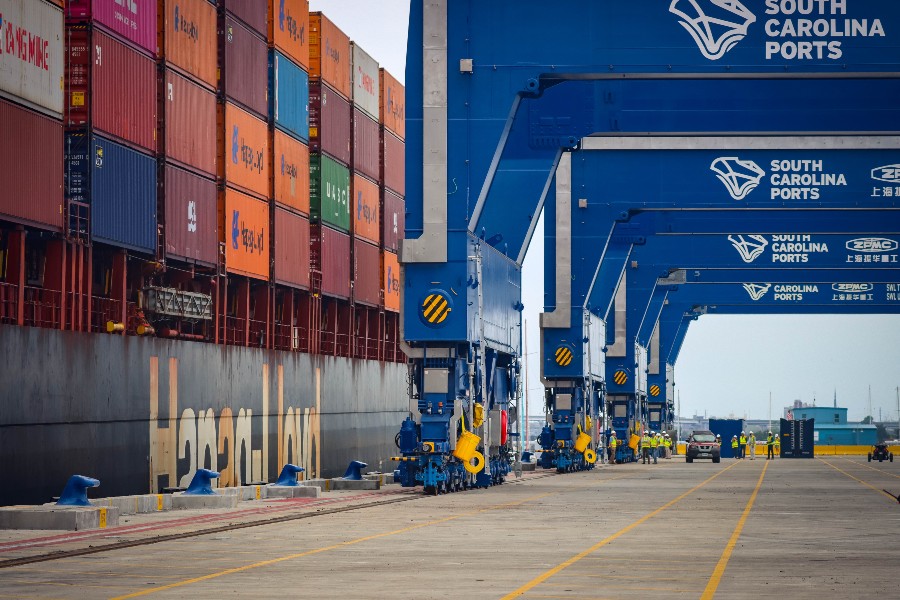 “I know you’ve seen that BMW is the largest exporter of automobiles in the United States,” he told SC Biz News earlier this month, adding that roughly 70% of exported value from Inland Port Greer contains BMW products bound abroad. “And to be able to compete and do that, we have to have a port that handles that and continues to grow.”

Today, Lummus added that S.C. Ports’ continued investment in its infrastructure like the Inland Port expansion was a keystone in South Carolina’s ability to speed up the supply chain to and from the Upstate, ultimately driving additional jobs, investment and economic growth to the region.

“The port, in the overall big picture, is just so critically important to the Upstate,” Lummus said following the opening of the Hugh Leatherman Terminal. “Fifty-two percent of all traffic going in and out of the port is from the Upstate. The largest users are mainly from the Upstate: BMW, Michelin, TTI and other Upstate companies. Just Greenville County alone has about $7.5 billion in economic impact from the port; Spartanburg: about an $8.5 billion economic impact each year. It’s just an incredible asset.”

While BMW spokesperson Sky Foster reported that the Hugh Leatherman terminal would not directly impact the auto manufacturer’s exports of finished products — Charleston’s Columbus Street Terminal met that demand a few years ago — it would allow the company and suppliers to boost the container volume of imported and exported parts to Greer.

Especially now that worldwide, the BMW Group is gearing up for a 50% increase in electric car sales, including hybrid models, this year following Plant Spartanburg’s record-breaking sale of plug-in vehicles in 2020. So far, Swafford Transport and Warehousing’s Locke notes that he has had four brokers reach out to him lately on the hunt for a specialized warehouse able to store the lithium ion batteries used in BMW’s electric models.

After hearing the announcement, BMW President and CEO Knudt Flor praised the port system’s longtime relationship with the company’s North American hub and credited it for the manufacturer’s success as the largest U.S. auto exporter by value.

“We export 70% of our South Carolina-made vehicles through the Port of Charleston to 125 countries around the world,” Flor said in today’s release. “BMW was also the first customer for S.C. Ports’ rail-served Inland Port Greer in 2013. Inland Port Greer has proved incredibly beneficial to our supply chain. We depend on reliability and speed to produce every car to order, and S.C. Ports continues to deliver for BMW.”

Doug Rink, CEO of Keller Manufacturing and president of its subsidiary TA Logistics, supports DHL’s operations through his five-person logistics team. He noted TA Logistics is cautious in expanding in response to predicted demand, but he knows that S.C. Ports’ recent slew of expansion projects will prompt strong growth within his company and partners across the eastern seaboard.

“I think they’re right on,” Rink told GSA Business Report. “Right on time. It’s going to help us a lot … it’s a great time, a great time to be in logistics.