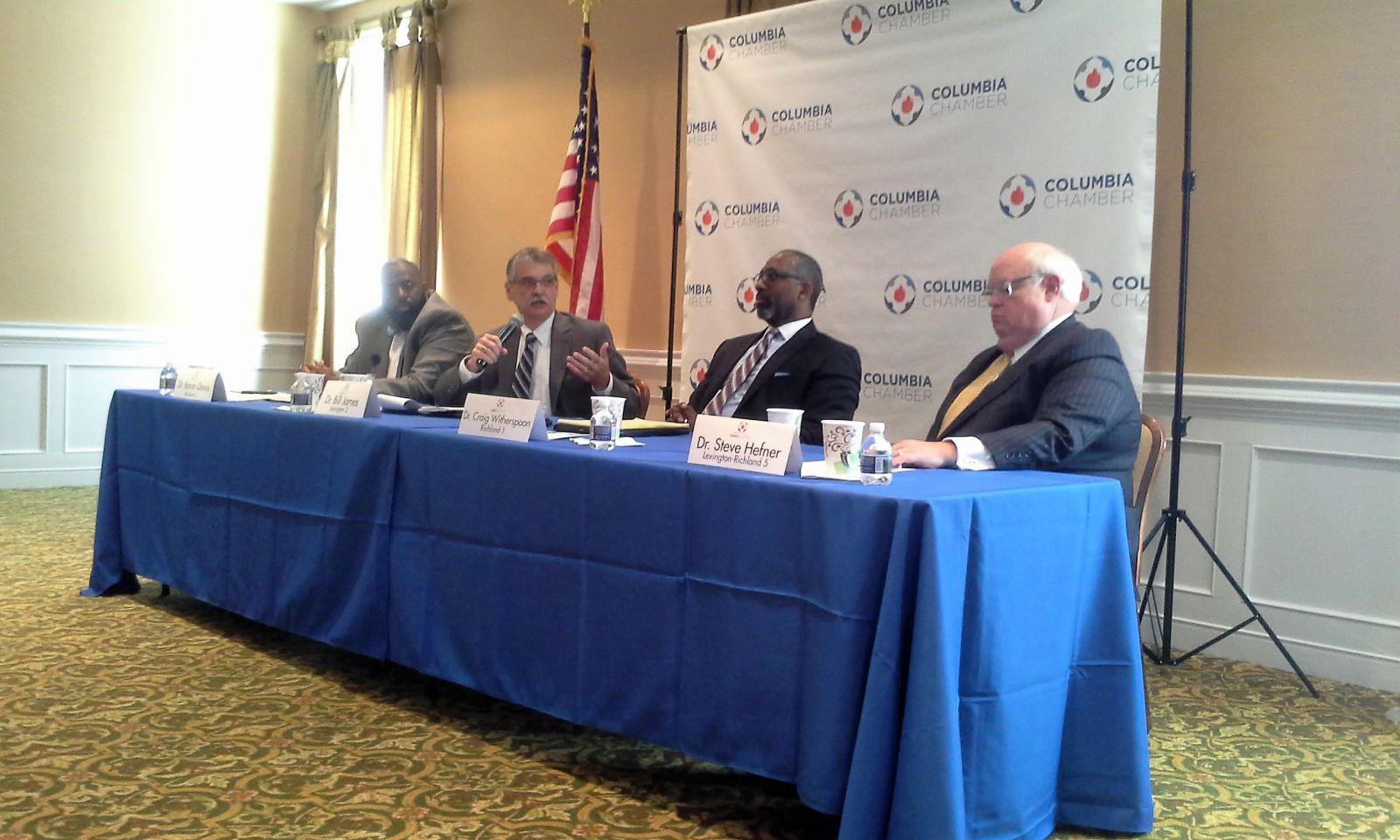 Superintendents from Lexington and Richland County school districts met with business leaders at Tuesday’s monthly Columbia Chamber of Commerce meeting, outlining the challenges they face in retaining teachers and meeting students’ needs while fighting a negative perception of public schools.

“When we talk to teachers, salary is a big issue,” said Stephen Hefner, Lexington-Richland District Five superintendent. “There’s not a draw toward the profession. Teachers tell me it’s not as respected as some other jobs. I feel teachers are under a far greater duress than any other time in history.”

A recent report released by the deans of education from six major S.C. universities found more than 6,500 teachers left their positions at end of 2016. Of that number, more than half left for personal reasons, retired, moved out of the area or changed professions.

According to records from the National Center for Education Statistics, the estimated average annual salary for the 2015-16 year for teachers in public elementary and secondary schools was $48,542. The national average that year was $58,064.

The deans’ report said engaging the business community to help change the narrative surrounding the importance of teaching could help retain the state’s current teaching base.

“We can’t have a growing economy in the Midlands without a qualified, educated workforce,” said Carl Blackstone, CEO of the Columbia Chamber. “What we’re trying to do is build a better business climate, and to do that we must guarantee a company that we have the workforce to grow their business. The biggest takeaway today is we need more conversation with the education community. We have to recommit ourselves to investing time, resources and energies into helping them become successful.”

The Education and Economic Development Act, passed in 2005, targeted that goal by creating the Personal Pathways to Success, a program designed to better prepare S.C. students for the workforce and post-high school education through early career planning and individualized curriculum.

Bill James, Lexington Two superintendent, said he is most proud of providing one-on-one technology instruction for students from 4K to 12th grade. He hopes an innovation center slated to open next year will build on that foundation and become the “crown jewel” of the district.

“Our vision for the Career and Technology Center won’t just be your 1970’s vocational school,” James said. “I was a building and construction teacher, but I always wanted my kids to understand the science and math behind everything they do. It’s an application facility for us.”

Craig Witherspoon, Richland One superintendent, said he wants to expand opportunities for students.

“It’s not about chasing a score every day,” he said. “It’s that path, that journey. Are we able to make students better than what they were when they joined us? That’s something we take to heart.”

Baron Davis, Richland Two superintendent, said his district wants to invest in a culture of excellence and help students recognize their talents before graduating high school — “aligning those passions with purpose and putting it into action,” he said.

Davis said there is a negative perception of public schools not only in the state but around the country.

Results released Monday by the S.C. Department of Education illustrated some challenges faced by state educators, showing that fewer than 30% of South Carolina’s elementary and middle school students met state standards for English, math and science.

Among fourth-graders, 52.7% met state standards in social studies, the subject in which all grade levels demonstrated the most proficiency. Students scored lowest in math, with just 17.1% of seventh graders and 18.6% of eighth graders meeting state proficiency standards.

“The results of these assessments show that while we have set the bar high for all students, we are not doing enough to support them and provide them with the resources and knowledge to attain their full potential,” State Superintendent of Education Molly Spearman said in a statement. “We must work together as parents, educators and communities to address this issue and ultimately ensure our students graduate prepared for success.”