Five young men signed their names and donned the hats. It was signing day. But they weren’t committing to play football or basketball or any other sport. They signed on to the Michelin Youth Apprenticeship program.

“We know we’re not alone in this challenge. All companies are evaluating innovative approaches to find the right people,” Clark said. “Michelin believes that we should develop this talent locally and invest in our state. Strong and stable careers in industry contribute to strong and stable communities. It is for these reasons that our strategic partnership with Greenville County schools is so critically important.” 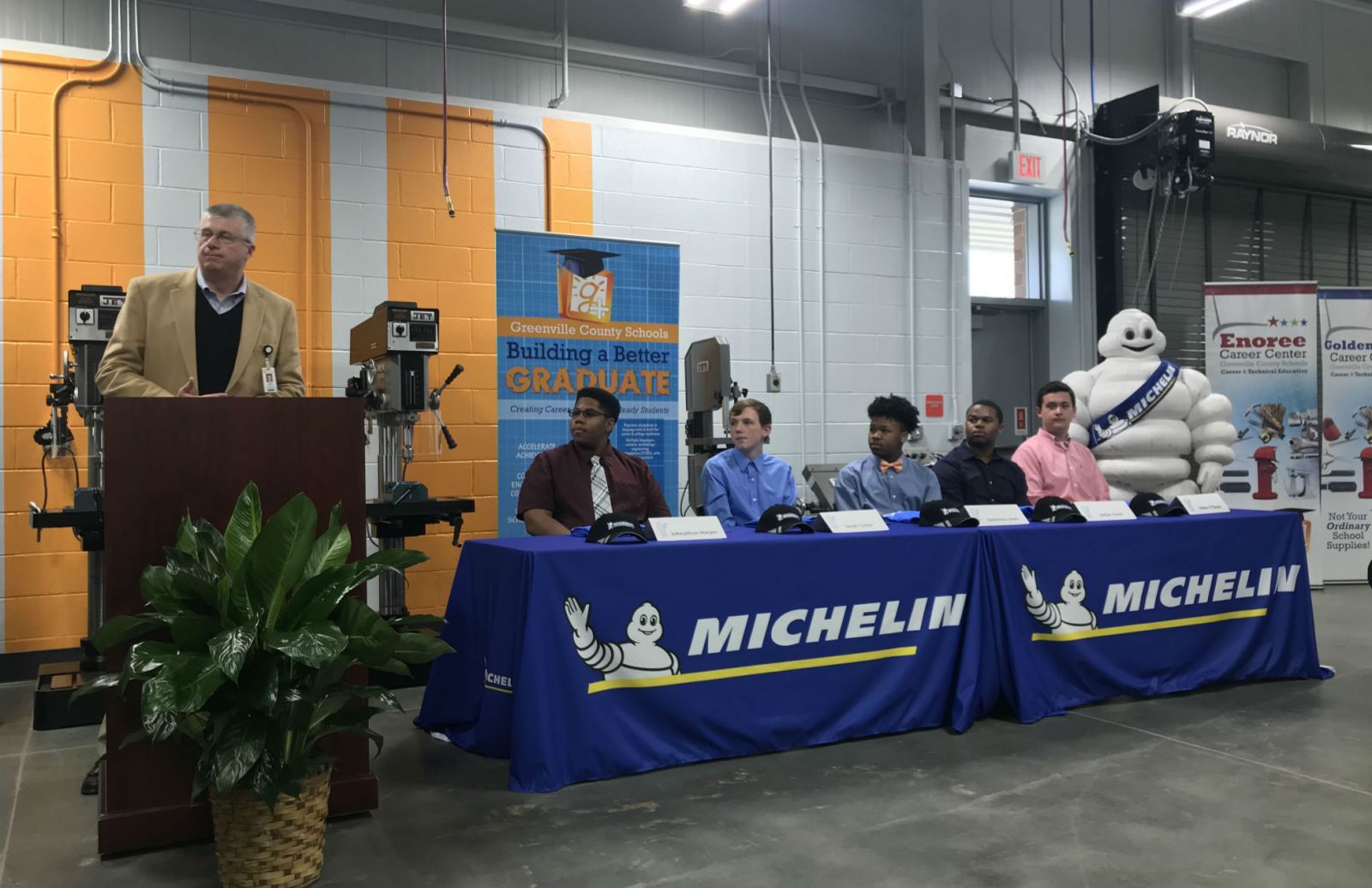 Burke Royster, superintendent of Greenville County Schools, said the youth apprenticeship with Michelin “represents the single largest commitment of an employer and the greatest potential for additional commitment for the apprenticeship opportunity.”

“These five young men represent the first group — the pioneering group — for what we want to be the largest apprenticeship program in the state, in the southeast, maybe in the nation,” Royster said. “The commitment that you see here from Michelin, we’ve seen for years from Michelin.”

Royster said Michelin “has been a great partner in helping us create college and career ready students.”

Michelin’s manufacturing plants are highly technical, highly automated environments, according to Clark. He said the skills needed to install and maintain machines in the plants include strong math, science, reading and comprehension skills. In addition, employees need to be team players and problem solvers, he said.

“It’s a challenging environment that can present tremendous opportunity for employees to have a long and rewarding career,” he said. “We believe that more parents and more students should be aware of the long-term value and growth opportunities in a career in manufacturing. That’s one of the key reasons, quite honestly, that we’re having this ceremony today. This is an exciting and valuable opportunity for young people.”

“There is a workforce pipeline issue. As we look to replace those that are going to retire there is an issue with students not being aware of the careers available right here in this area, that are very rewarding, high paying careers,” he said.

Greenville County educators want to build a better graduate, according to Royster. One that is college and career ready. He said when graduates cross the state to receive their diploma, he wants them to also have industry certification or a college credit transcript, or both.