Warren Wise didn’t plan to become a teacher, but his career detour — now in its 16th year — has proven to be a successful path.

Wise, a science teacher at Blythewood’s Kelly Mill Middle School in Richland School District Two, was named the inaugural S.C. STEM Educator of the Year on Tuesday as part of a ceremony recognizing STEM Education Day at the S.C. Statehouse.

Wise was chosen from more than 250 nominees and a field of five finalists by a coalition including state education advocates South Carolina Future Minds and S2TEM Centers SC. 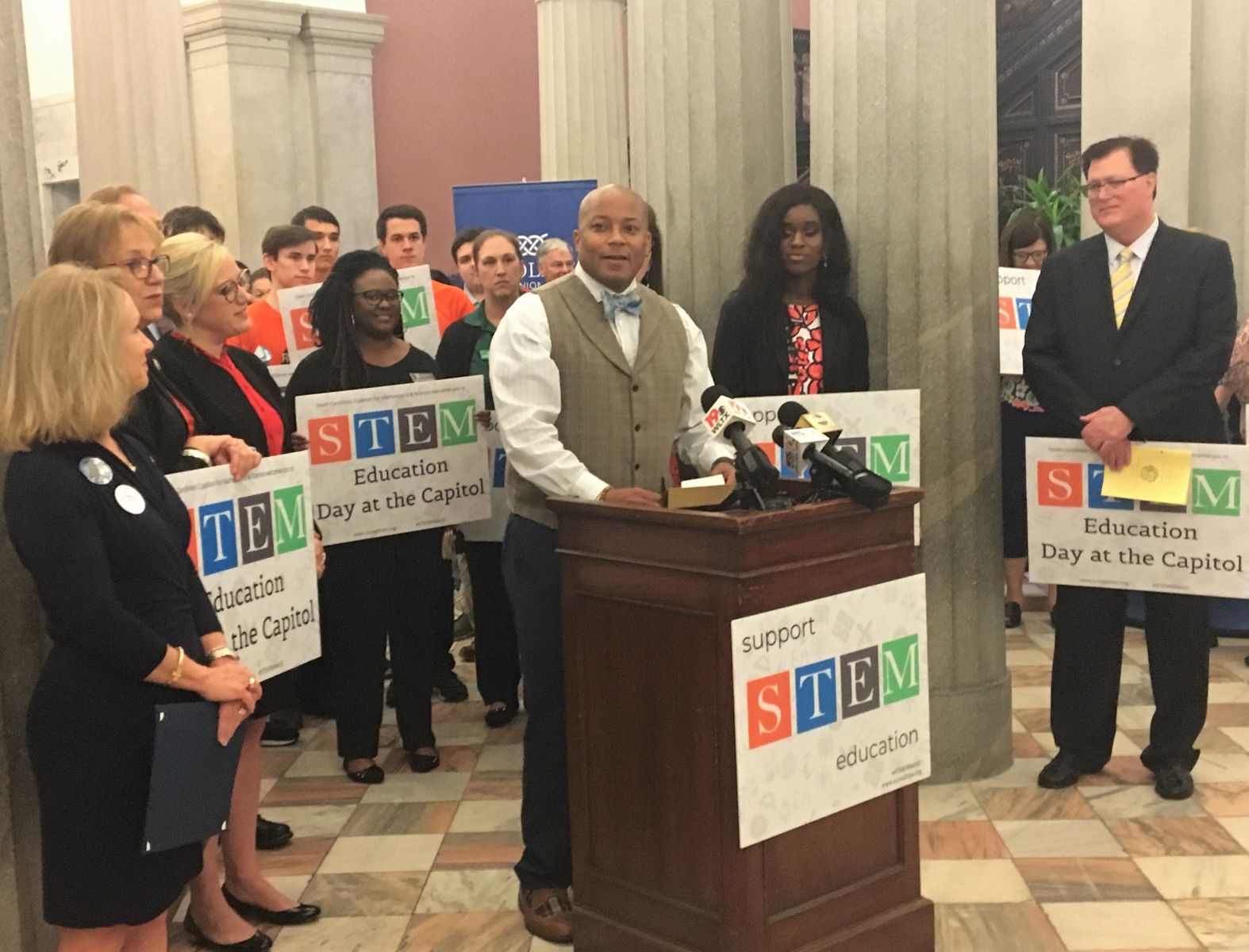 Wise, who graduated from Benedict College with a degree in psychics, originally planned on a career as a medical illustrator.

“Working with students at Benedict College, I found a passion for teaching, and it just kept going on from there,” he said.

Wise was joined at the ceremony by his fellow finalists, S.C. Speaker of the House Jay Lucas and science, technology, engineering and math students from throughout the state. Robotics teams from S.C. middle and high schools including A.C. Flora demonstrated their creations on the Statehouse lawn, and Lt. Gov. Pamela Sue Evette read a proclamation from Gov. Henry McMaster recognizing the positive effects of STEM education.

“We understand what STEM education means to the state of South Carolina. We understand how the state continues to grow, continues to bring in high-tech jobs, and we need to fill those jobs,” Lucas said. “Right now, we have about 70,000 jobs that are unfilled, and a lot of those jobs are STEM jobs.”

Evette noted the presence of advanced manufacturing companies such as Boeing, Volvo and BMW in the state as examples of the industry opportunities a workforce trained in STEM fields can create.

The STEM Educator of the Year award was created to recognize and inspire the state’s teachers, said Caroline Mauldin, executive director of S.C. Future Minds, a nonprofit that works with state school districts and leading S.C. businesses.

Wise also worked for the S.C. Department of Education before entering the classroom, traveling the state to showcase technology being used at schools and creating online education programs. He said that experience also sparked his passion for teaching.

Wise, who said his interest in science was sparked by a childhood love of the TV show MacGyver and its resourceful, hands-on protagonist, credited his fellow teachers at Kelly Mill Middle School with pushing him to become a better educator.

“We compete against each other to try to inspire the kids,” he said. “ … I can’t believe that I’m up here at the podium — my heart is pounding — for something that I love to do.”

The other finalists for STEM Educator of the Year were:

STEM Education Day at the State Capitol, in its second year, is sponsored by South Carolina’s Coalition for Mathematics & Science, part of Clemson University’s College of Engineering, Computing and Applied Sciences.

According to the S.C. Department of Commerce, the manufacturing industry accounted for 11% of South Carolina’s non-agricultural employment in 2018, with 66,000 new manufacturing jobs announced from 2011-2018.

Tom Peters, executive director of the coalition, said the STEM jobs available in the state reflect the number of opportunities being created daily in those fields.

“What we are doing today is creating even more challenges for tomorrow,” Peters said.