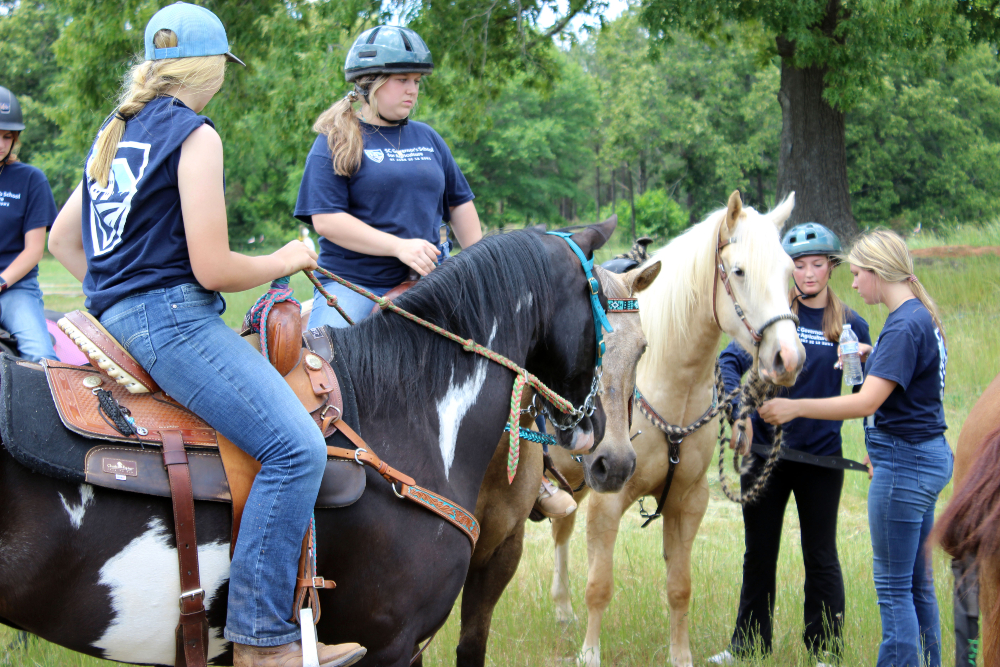 Cattle farming is in 17-year-old J.C. Chandler’s blood. He grew up on his family’s farm near Belton in South Carolina’s Upstate and has raised and shown beef cattle for many years, so many that he jokingly calls them “some of his best friends.”

Ask the high school senior what he wants to do after graduation, and he gives an outline of the path he wants to pursue toward becoming a reproductive physiologist specializing in the breeding of beef cattle. Chandler has mapped out what he needs to study and where he wants to pursue those degrees.

It’s the kind of specific career focus you don’t see in many teenagers, but Chandler was able to plan this type of future because he is one of the 78 students currently enrolled at the S.C. Governor’s School for Agriculture at John de La Howe, a residential high school focusing on agriculture that is the only one of its kind in the country.

Established in 2020, the Governor’s School for Agriculture is located in McCormick County on 1,300 acres of picturesque, sprawling grounds of the John de La Howe School, the oldest educational institution in South Carolina below the college level, according to a published history on the school’s website.

Once a boarding school for students with behavioral problems that forced them out of traditional public school, John de La Howe’s enrollment was falling, and facilities were crumbling in 2018. The school was in danger of closing, but state officials instead decided to change its mission to educating students to form the future of agriculture in South Carolina.

Related content: How drones are giving South Carolina farmers an advantage in the field

Related content: Why this Greenville tech company sees agriculture as the future

Agriculture is the state’s biggest industry, pumping $46 billion into the economy and generating 250,000 jobs, according scagribusiness.com.

But the sector faces significant challenges in coming years as fewer young people choose farming as a career. The average age of a South Carolina farmer right now is 59, according to Timothy Keown, the school’s president.

“One of the ways to combat the average rising age of the farmer is to get the younger generation more interested in agriculture,” Keown said. “By getting the students here through hands-on learning, the end goal is for them to become productive citizens who enter either into agriculture or careers involving natural resources.”

What makes their experience much different is the amount of hands-on work they do in their chosen fields. Part of each academic day is spent in the classroom, and the rest in various spaces around campus – greenhouses, fields, workshops, stables, barns and forests – where they learn how to do work related to their fields of interest.

On any given day, students in the horticulture track might work with flowers, animal science students could be found caring for some of the school’s cows or chickens, and those in the mechanics track might be in the welding shop. Forestry and natural resources students have learned how to conduct controlled burns in woodlands around the property.

“We look at this whole campus as a laboratory farm,” said Gregory Thompson, the school’s principal. “The students here get more hands-on experience with their trade of choice than most students at other secondary schools. That’s important because we’re hopefully preparing students who can leave here and go right into further education in their field or right to a job. The pandemic brought light to the importance of agriculture and how shortages in that work force affected everyone.”

Skills taught at the Governor’s School for Agriculture might seem pretty unorthodox to people who don’t know anything about agriculture or farming. Students in animal science, for instance, learn how to artificially inseminate cows and become certified in the task.

The idea might make some teenagers cringe, but not these students. Chandler, for instance, talks about how that skill alone could lead to an immediate well-paying career after high school.

Thompson said that is part of the school’s goal — to offer an agricultural-based education that leads to student success whether they choose college or to immediately go into the workforce after graduation. 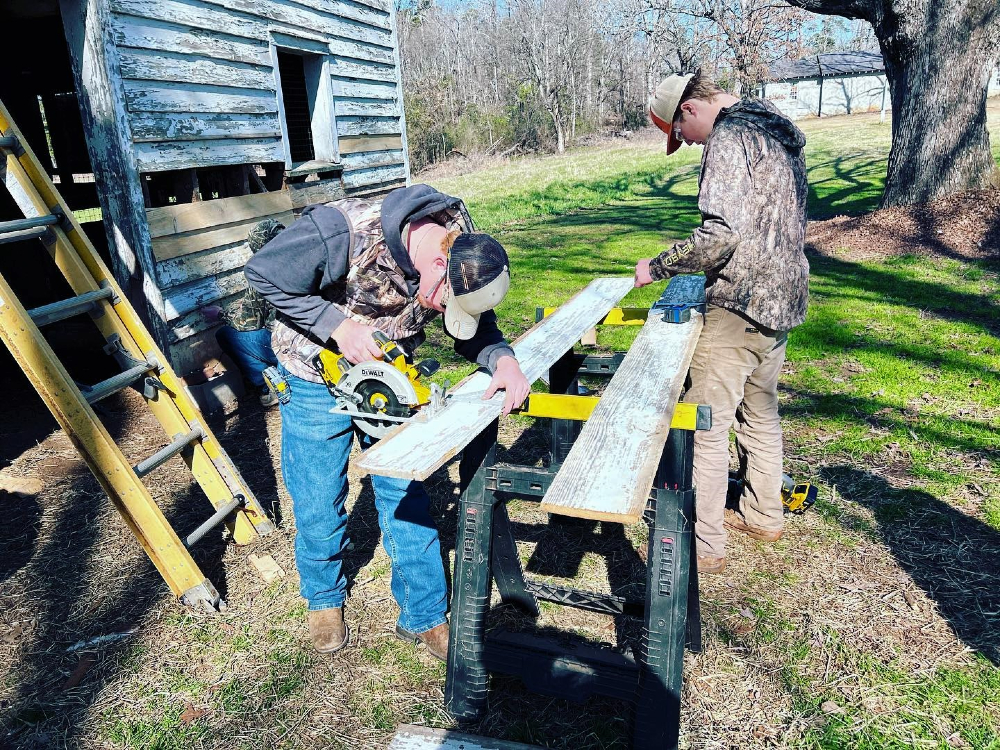 The Governor’s School started out with about 20 students and has been growing steadily, despite some bumps in the road as the properties were renovated and the challenges of running a new institution were ironed out.

Currently 78 students from throughout South Carolina are enrolled. According to regulations, the school can only have 10% out-of-state enrollment, and currently students from Florida, Georgia, North Carolina and Alabama are in residence. Word about the school is getting around, however, and officials say they have heard from prospective students who live as far away as Missouri and expect that interest to grow as school representatives continue to attend agriculture and education conferences nationwide.

Keown said in some ways it has been an uphill battle to get word about the school out to people in other parts of the state, particularly in the Pee Dee and coastal regions like Horry County that a four-hour drive from rural McCormick County. Staff members and recruiters from the school regularly travel from one end of the state to the other, speaking at 4-H and Future Farmers of America events, running displays at career fairs and other events.

“We had to rebrand the entire school from what it was known for back in 2018, so we’re doing everything we can,” he said. “We have a heavy social media presence, and we host open houses and campus preview days.”

The eventual goal is to have a total enrollment of 100 students once three more residence halls on campus are renovated.

Students currently at the school said they were drawn to it because of deep interests in agriculture and natural resources. Many of them, like Chandler, come from farming backgrounds.

Fort Mill resident Emily Redman, 18, heard about the school from her original high school’s agricultural education teacher and applied because of her interest in forestry.

“I really like the experience of living here on campus because it’s taught me to be a lot more responsible,” she said. “I feel like I’m ahead of the game because I’ve already been living on my own.”

She eventually wants to apply to study forestry at Clemson or the University of Georgia.

Some students want to pursue careers that will make farming more accessible to everyone.

Timothy Fulmer of Newberry, 16, grew up in a family that runs a roadside produce stand, so agriculture was a natural fit for him when he chose the Governor’s School. He originally thought of studying plant and animal science, but instead his lifelong interest in tractors steered him toward the ag-mechanics track.

“I’d like to go on from here and study general engineering and eventually be able to design and build tractors and other farm machinery that could be used by people with disabilities,” Fulmer said. “There are a lot of accidents on farms, and this would be a way for people to keep on farming even after they’ve had a serious injury.”

Thompson said the school’s goal is to both give its students the best education possible and to produce graduates who can make an impact in a world where growing populations and supply chain problems are creating challenges for the agriculture sector.

“We’re working extremely hard to make the S.C. taxpayers proud of this school and also to raise awareness of just how important agriculture is to every facet of life,” he said. “There are going to be greater needs for schools like this in the future.”