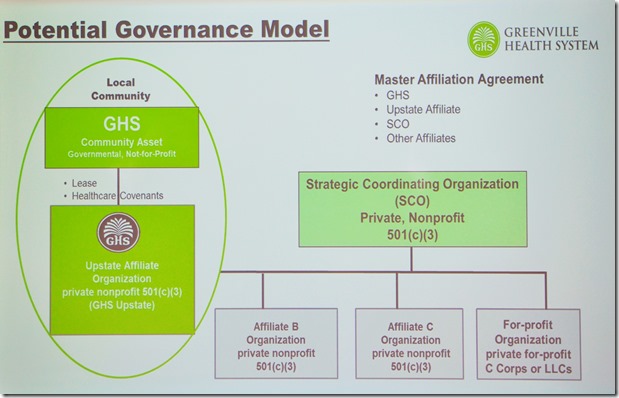 The structure of a proposed governance and growth plan being developed by Greenville Health System trustees. (Image provided)

Greenville Health System trustees will continue developing a governance change and growth plan that includes leasing the public, nonprofit system’s assets to a new, separate board that does not have state political ties, Chairman James Morton told state lawmakers today. Republican state Sen. Mike Burns, of Taylors, left the meeting saying a bill will be prefiled Dec. 3 to prevent such a “hijack” of taxpayer assets.

The state Supreme Court has approved a request by Burns and four other members of the Greenville County Legislative Delegation to intervene in a system petition seeking approval of their making the change without legislative approval. Morton said in response to questions that the board is waiting on a Supreme Court decision but if the justices decide against rendering a decision the board plans to move ahead with the changes and consider additional details in December.

“As you are aware, we had a couple of attorney general’s opinions come down, and we really don’t see that we have to go to the delegation for approval of this,” Morton said in response to a question by Republican state Sen. Tom Corbin, of Travelers Rest.

Burns said along with intervening in the Supreme Court filing, which he described as a “friendly” suit instigated and financed by the trustees, “we are prefiling legislation Dec. 3 to undo or take care of this situation.”

“It sets precedent across the state,” Burns said. “Any political subdivision across the state can do this. Clemson University can go private and set up a board. Set it just like this and go private. The Greenville public school system with its 76,000 students can form a private entity. Hijack the public’s money that we’ve put in this thing and they will get to oversee it and govern it …Who is going to have oversight over this?”

Trustees also told the lawmakers that no board members or system managers will profit from the changes and that the new affiliate could never become “for profit.”

“It would actually be breach of the lease,” said board attorney Joe Blake. “So that’s in there.” Blake said the proposed changes include possible affiliations with for-profit entities, such as nursing homes.

“There is a need we believe to be able to work with everybody in the community that is involved in the continuum of care,” Blake said.

Morton said in describing the proposed changes that there will be three entities: GHS, an Upstate affiliate and a “strategic coordinating organization.” Each would have separate governing boards.

“These roles are set forth in the draft lease and master affiliation agreement which the trustees have been considering for several months,” Morton said. He said GHS “remains a governmental entity” as organized in state law and will have “contractual relationships with the other two entities. Specifically it will continue to own its current assets and lease them to the Upstate affiliate. It will monitor compliance by the Upstate affiliate and the strategic coordinating organization with their contractual commitments to provide for the health care needs of the community. The commitments are included primarily in the lease and master affiliation agreement and include providing for the health care needs of the community.”

In response to questions about past tax support for the system, Morton said the proposed changes include spending “$4 million a year for 20 years that will be provided to them to support health and wellness in Greenville County. This is equal to the amount that Greenville County taxpayers paid toward the building of GHS. No tax money has been received by GHS in the last 18 years. Since 1947, over $2 billion in capital alone has been spent on building and equipment. Our community is indeed fortunate that GHS has been able to do this with less than 3% being from tax money.”

Board members declined to allow public comment, and Republican state Sen. Shane R. Martin, of Pauline, read a statement that he was “not in a position to discuss the merits or pitfalls of the proposed plan, because the details of the plan have been kept secret for over a year, and nearly everyone affected by this has been given no opportunity to see or review them, much less ask any questions.”

Martin said the Wednesday meeting is “open to the public in name only as members of the public who want to speak, including one of my constituents, are being denied the chance to speak to their elected officials. This reminds me of a recent episode in Anderson County where proposed school consolidation plans were accompanied by the message to concerned citizens that they sit down and shut up. I regret that we have reached that day in Greenville County.” He said if the system “wants to be a private asset, then they simply should ask for a change in the law. The fact that GHS has chosen to try an end run around the public probably tells me all that I need to know.”

“GHS may succeed in absconding with a public asset, and a few people may get very rich in the ensuing merger, but when the citizens and patients of Greenville County are paying two and three times as much or more for the same health care, I want to be on the record as having at least spoken up and tried to help them,” Martin said.

Morton said the system is committed to continued participation in government-sponsored programs like Medicare and Medicaid, providing for all persons in need of emergency care “regardless of ability to pay” and not discriminating in the delivery of care, employment practices or workforce development efforts.