Decades ago, Jack Van Loan had never heard of Five Points. Now, he’ll be a permanent part of the historic residential and commercial district in downtown Columbia.

The Five Points Association broke ground today on Centennial Plaza, planned for the intersection of Blossom Street and Congaree and Santee avenues. A continuation of the celebration of Five Points’ centennial in 2015, the plaza will include a 6-foot rotating water feature and a bronze 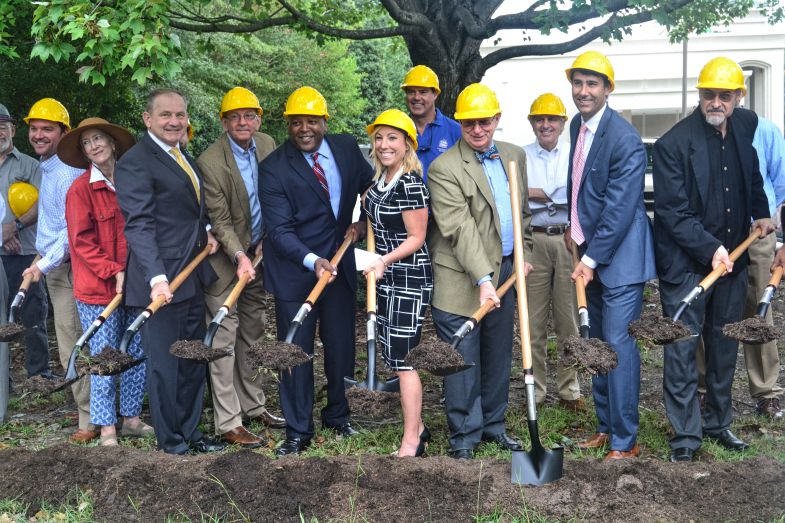 statue of Van Loan, a retired Air Force colonel who spent six years as a prisoner of war in Vietnam from 1967-1973.

“It’s important that the Five Points Association reinvests our money back into the neighborhood,” said Amy Beth Franks, the association’s executive director.

After leaving Vietnam, Van Loan, a native of Oregon, graduated from the National War College and began serving at Shaw Air Force Base in 1978. In Sumter, he first heard about the thriving district of Five Points, and he moved his water business there in the early 1990s.

He quickly got involved with the Five Points Association, eventually serving as its president. Under his leadership, the association paid off debts, cleaned up an annual St. Patrick’s Day festival that had become unruly and oversaw civic improvements including the 1997 installation of a fountain and a large-scale streetscape project.

“When I transitioned from the Air Force into civilian life, I came down here, and they took me in,” Van Loan said. “And I wasn’t easy to take in either, because I’d spent 20 years flying jet fighters. This is a little slower way of life. But I really loved it down here.”

Columbia Mayor Steve Benjamin and Richland County Councilman Seth Rose – who met his wife in Five Points while a student at the University of South Carolina – were among city dignitaries on hand for the groundbreaking. The finished plaza will be unveiled on Nov. 11 – Veterans Day.

“We’ve got a short time frame, but we’ll be working day and night to make sure that this is finished and that it’s perfect,” Franks said.

“I have had a half dozen developers just over the past few months who are looking at key projects in Five Points – some small, but a couple large,” he said. “The future’s bright down here.”

The ongoing challenge, Benjamin said, is better connecting Five Points with the Vista, Main Street and the burgeoning Bull Street redevelopment through improved infrastructure. The Commons at BullStreet landed a new tenant in luxury cinema chain Cobb Theatres in July, and Benjamin said more movement there is imminent, including the announcement of a senior housing facility.

Fred Delk, executive director of the Columbia Development Corporation, shared that positivity as he pointed out several businesses around the planned plaza as examples of Five Points’ rebound from a recent spate of crime and safety troubles.

“There were some problems a couple of years ago, but that was short-lived (in) a hundred-year history,” Delk said.