Editor's note: This story has been updated to reflect a statement issued by Greenville Health System.

A group of citizens and some members of the Greenville County legislative delegation have filed a civil lawsuit against Greenville Health System over its proposed governance change.

The lawsuit contends that the GHS Board of Trustees cannot delegate a majority of its duties to a private, not-for-profit board or that the board may be “abdicating its fiduciary responsibilities.” The suit also claims that the current board cannot bind future boards by leasing its assets for 100 years and that the two new boards have “no more authority than GHS.”

On Oct. 1, the governance of the hospital system will be divided between a private, not-for-profit board called the Upstate Affiliate Organization, which will assume the operations of the hospital, and the Board of Trustees, which oversees the leases of GHS properties and a new community fund the board can use “to support health-related care, research and education initiatives to benefit the residents of Greenville County.” 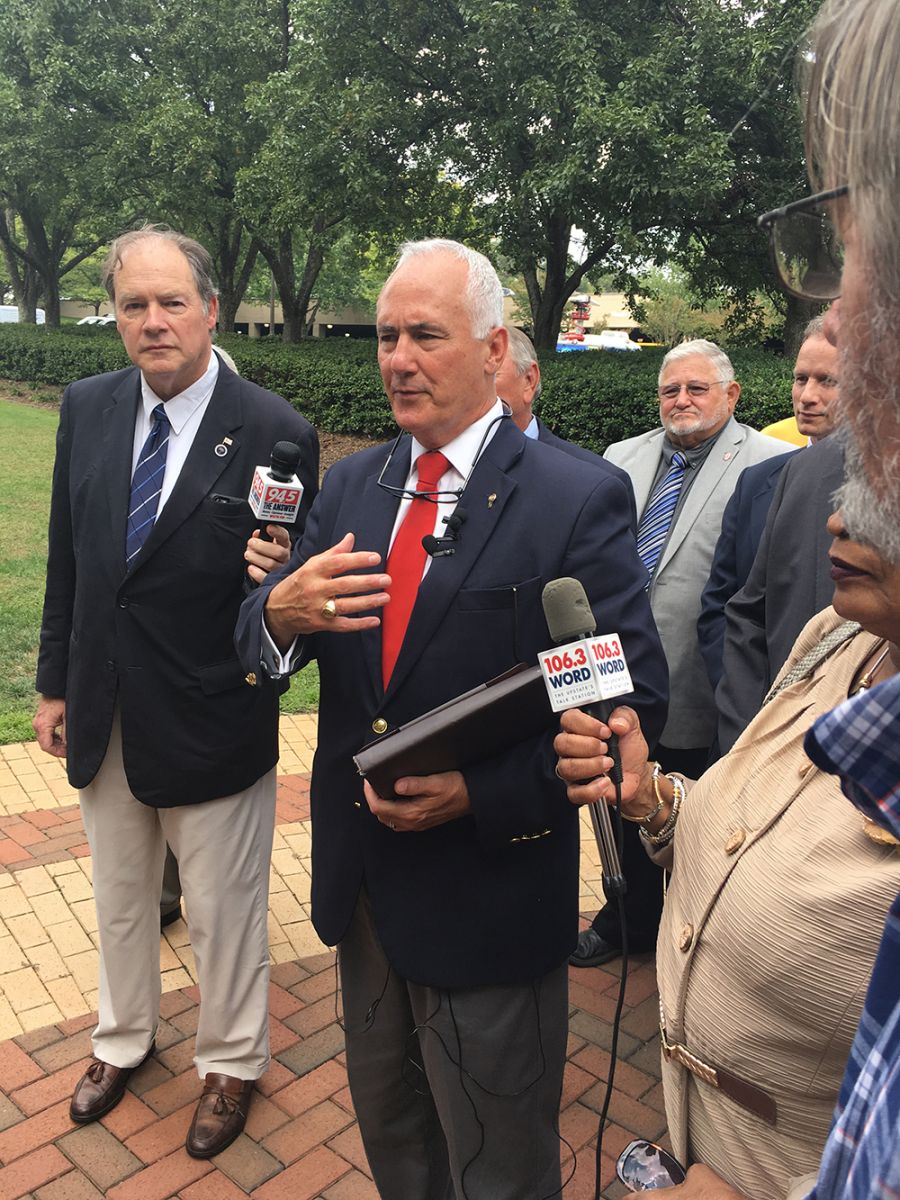 Rep. Garry Smith, R-Simpsonville, a member of the delegation that is against the governance change, held a press conference Wednesday afternoon in front of Greenville Memorial Hospital.

“I don’t think any of us wanted to be here or for this to happen this way,” Smith said. “Unfortunately, the GHS board chose, for whatever reason, to handle things this way.”

One of the points of contention is that, under the lease agreement between the Strategic Coordinating Organization and the Upstate Affiliate Organization, $6 billion in public assets “are just going to be given away for $1.”

“One of our greatest fears we have is taking place in reality,” Smith said. “What we are seeing today is the worst called corporate medicine.”

However, not every member of the legislative delegation is on-board with the suit. Only Rep. Mike Burns, R-Taylors; Rep. Bill Chumley, R-Woodruff; Sen. Tom Corbin, R-Travelers Rest; Rep. Dwight Loftis, R-Greenville and Smith are a part of the suit, leaving a large majority not a part. One who has expressed opposition to the suit and the involvement of the delegation is Rep. Phyllis Henderson, R-Greenville.

“We believe that politicians should not be making decisions about how to run the hospital,” Henderson said, in a statement. “We have appointed an outstanding group of trustees who are committed to do what is best for Greenville.”

The South Carolina Supreme Court has denied motions by both parties to hear the case and the attorney general’s office has issued opinions suggesting that only the court could decide the matter. The civil suit asks the court to rule the governance change unlawful.

Sandy Dees, spokeswoman for GHS, called the lawsuit “irresponsible” as the issues raised by Smith and others “have already been raised – and repeatedly answered.”

“Board members spoke at numerous community groups. We announced the go-live date of Oct. 1 in March, and we very much appreciate the yeoman’s work put in by many, many employees to make this restructuring a reality and ensure that GHS is positioned to continue providing great care in the future while meeting the changing demands of health care,” Dees said, in a statement.

But, Smith said the lawsuit was viable and he hopes to send a message to the Board of Trustees and executive staff.

“We are hoping this brings to the realization that we are not just going to go away and let this go without a fight,” Smith said.

The health system is still awaiting word from Gov. Nikki Haley as to whether she will reclassify the $600 million in bonds from public to private, not-for-profit status. According to Mike Riordan, president and CEO of the Strategic Coordinating Organization, if the bonds are not reclassified, GHS could face as much as $167 million in additional bond interest and fees because the bonds would have to be sold on the taxable market.