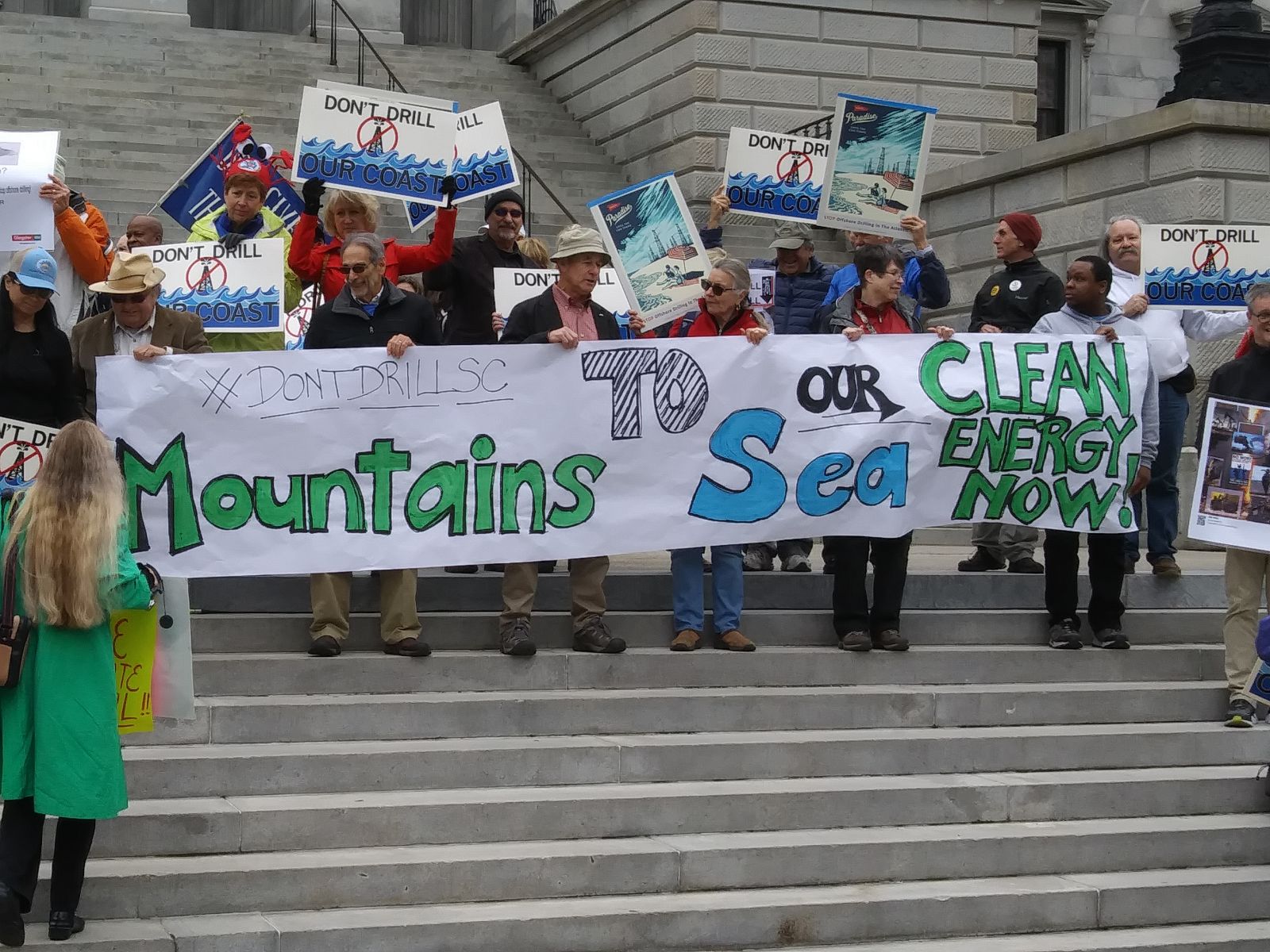 Before a crowd of about 100 people, representatives from the S.C. House and Senate shared their thoughts on a proposal that would allow drilling and seismic testing off South Carolina’s coastline.

Frank Knapp, president and CEO of the S.C. Small Business Chamber of Commerce, emceed the event, held Tuesday on the steps of the Statehouse. His group began opposing the drilling and seismic testing in January 2015.

The drilling proposal, announced in January, includes 47 potential lease sales in 25 of 26 planning areas: 19 sales off the coast of Alaska, seven in the Pacific region, 12 in the Gulf of Mexico and nine in the Atlantic region, including off the S.C. coast.

The five-year plan, covering 2019 to 2024, was initiated by the America First Offshore Energy Strategy directive President Donald Trump signed in April that could eventually open Arctic waters and millions of coastal acres off U.S. shores to oil and gas drilling.

U.S. Rep. Mark Sanford said it was important for local leaders to be heard on the issue.

“All decisions don’t have to be made in Washington, D.C.,” Sanford said. “This issue transcends offshore and goes to the heart of what we believe as South Carolinians and Americans. We should be able to decide how our hamlets, towns and villages are developed.”

He also brought up the proposed exemption of Florida by U.S. Interior Secretary Ryan Zinke.

“Secretary Zinke said he would exempt Florida because its coastline was unique, tourism is important and (because of) voices of local and state leaders,” Sanford said. “My question is, is there anything more unique than a sunrise from Otter Island or Morgan Island? Is there anything more important than tourism to our coast? Carving out Florida and treating it wholly different compared to South Carolina is absolutely inconsistent with that most American theme of equality.

Gov. Henry McMaster has met with the president and voiced his concerns about drilling in South Carolina, including the $20 billion in annual tourism revenue that drilling could put at risk.

State Sen. Chip Campsen, R-Isle of Palms, said there is no place on the coast where the industrialization is compatible with tourism. Rep. Russell Ott, D-St. Matthews, said offshore drilling is something the state neither needs nor wants.

“I’m not going to let the wants of oil tycoons come to our state and feed their selfish desire for greed off the backs of something we hold so dear,” he said.

Ben Prater, who was raised in Spartanburg, traveled from Asheville, N.C., to attend the rally. He represents Defenders of Wildlife, a national conservation program, and runs the Southeast program office. He said he wanted to stand up against what he said is a reckless proposal.

“This not only jeopardizes coastal communities and the health of our economy, but also the wildlife we value in this state,” Prater said. “A lot of times these issues can become partisan, but it’s good to see everyone across the aisle coming together to say we don’t need this and we don’t want this.”

Bonnie Wright of Beaufort said she has seen the effects of offshore drilling, especially on marine life. Wright and her friend Vicki Nestor are part of the Friends of Hunting Island.

“We are all about the conservation of marine life,” Wright said. “We have 1.2 million visitors to the state park each year, and drilling would definitely affect that. We were involved and against this drilling two years ago and we want to keep our voices heard.”

A second rally was held later Tuesday afternoon prior to a Bureau of Ocean Energy Management presentation and public meeting at the DoubleTree Hotel on Bush River Road. Renee Orr, strategic resources chief for the bureau, said several people attended and expressed their feelings about the offshore drilling.

“Most of the people are asking whether their comments will be considered by this administration,” Orr said. “We’ve had some great discussions and a chance to have a good dialogue with folks to understand why we’re here.”

Orr said the group is collecting information to present to Zinke so he can balance the different factors and make decisions about what areas on the outer continental shelf could be made available.

“These factors include economic impact, environmental impact, energy needs, where the potential resource is, other uses for the area, and the list goes on,” Orr said. “The secretary has to look at all that information, so it’s important for the people speaking with us to provide comments that deal with those factors so we can bring the right analysis to the secretary.”

Orr said her group will spend most of the year traveling the East Coast gathering information. She said a decision could be made by the end of the year.