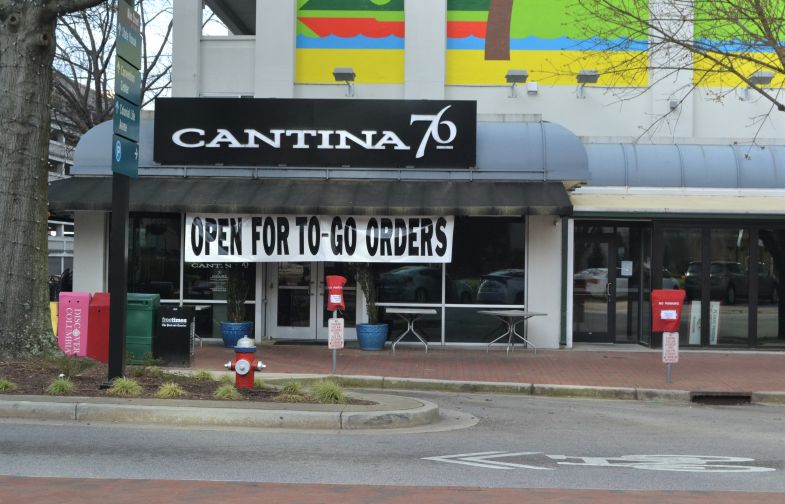 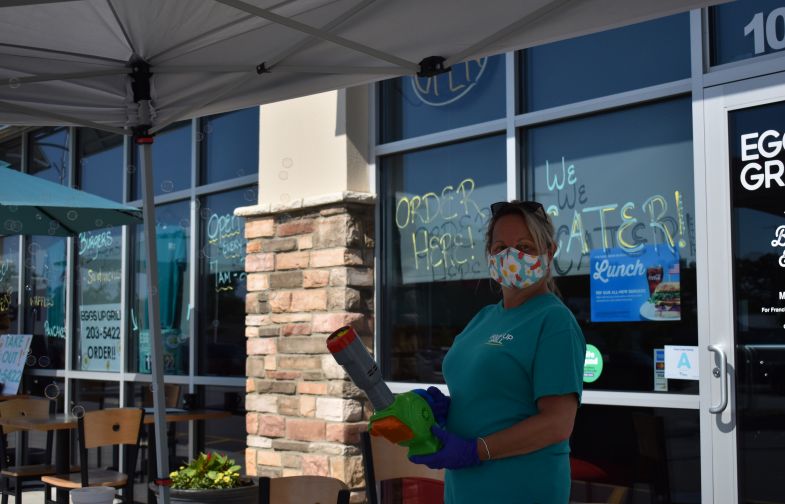 Michelle Zalinski prepares the patio for customers at Eggs Up Grill in Powdersville. (Photo/Molly Husley) 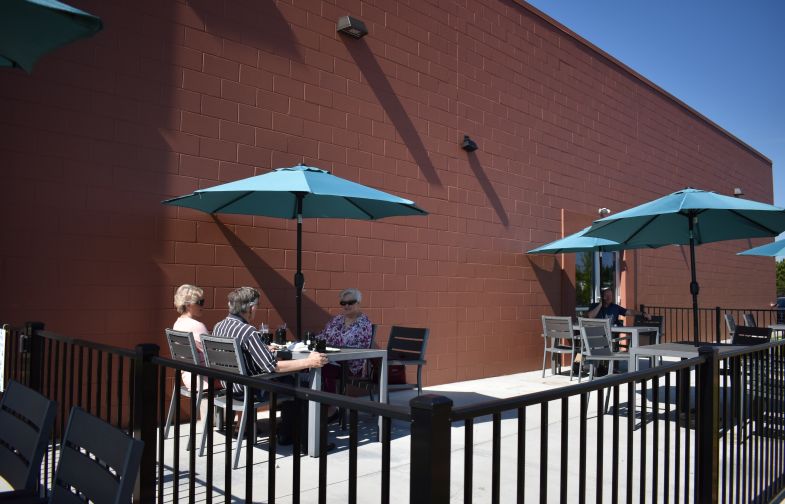 By 10: 30 a.m. Monday, Eggs Up Grill in Powdersville had seen about 30 visitors to its patio. S.C. restaurants were allowed to resume outdoor dining on Monday. (Photo/Molly Hulsey) 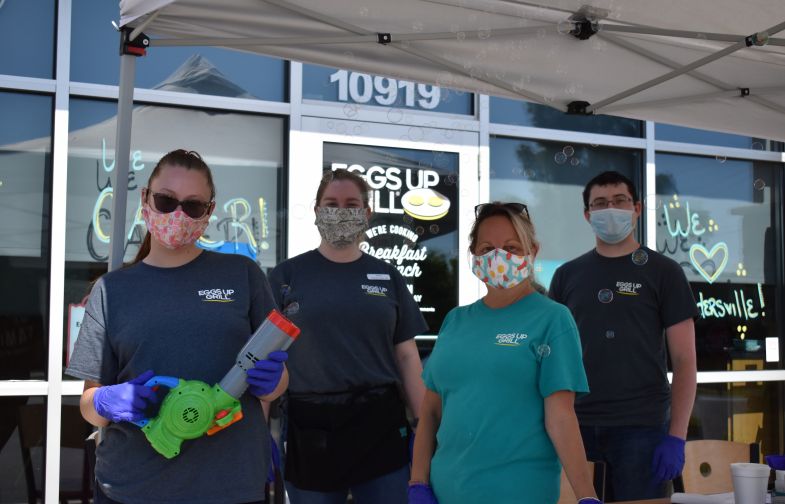 S.C. Gov. Henry McMaster lifted an executive order issued April 6 that  allowed residents on the road only to commute to work at essential businesses, visit family, obtain essential goods or services, attend religious services and recreate alone or with family outside.

McMaster also announced that outdoor dining will be permitted at state restaurants. However, early reaction from restaurant owners across the state was mixed.

Eddie Wales, owner of Motor Supply Co. Bistro, said the Congaree Vista restaurant would not open for outdoor dining for at least another week.

“We want to do it right,” Wales said. “We feel it might be a little too soon.”

Motor Supply, a Vista fixture since 1989 ranked fifth in a 2019 Southern Living poll of the South’s best restaurants, began offering curbside pickup April 29. Wales said the restaurant plans to focus its immediate efforts on that service.

“We just got that down this weekend, so we want to continue that,” he said. “We’ve had a real good response. I think that’s going to be the comfort level for a lot of people, even after they’re allowed to go out.”

Wales said he doesn’t expect Motor Supply to open its doors again until indoor dining is also permitted, “but I don’t blame any restaurant that had to be closed for any decision that they make. … Good luck to everyone.”

Today’s action comes after a week of meetings of AccelerateSC, a task force created by McMaster to develop an economic revitalization plan for the state. Based on advice and recommendations from the Department of Health and Environmental Control and the S.C. Restaurant & Lodging Association, guidelines (.pdf) have been established for outdoor dining, including tables spaced a miminium of eight feet apart and limited to groups of eight. Social distancing guidelines are to be maintained.

Some Spartanburg-based Eggs Up Grill locations have opened up their patios alongside existing curbside options — albiet with gloves, masks and caution. Managers are grateful that a sunny day and a bit of stir-craziness attracted customers on Monday morning.

"This has happened very quickly," Jamie Knight, manager of Eggs Up's Powdersville store, said. "But, we came out and got our tables ready, got our umbrellas, and of course, we had to measure to make sure everything was eight feet apart. (We) definitely tried to keep social distancing from each other, not letting them (staff) congregate up front, and that sort of thing. But it's been going really well so far."

By 10: 30 a.m., the breakfast venue had seen about 30 visitors on the patio. Knight said an average of 80 to-go orders come through on any given day since Eggs Up closed its dining room.

Chad Elsey, part owner of Cantina 76, said the restaurant’s five S.C. locations, including two in Columbia, were sticking with takeout orders only for now.

“We’re kind of assessing that day by day, on a location-by-location basis,” Elsey said. “We have very few (outdoor) tables and the crowds could end up being pretty big, so we’ve got to figure out some ways to accommodate those potential situations.”

Elsey said Cantina 76 will slowly begin ramping its staffing back up while preparing to put required safety practices — which include sanitizing tables and chairs after each customer — into place. He said takeout orders, which normally account for around 10% of the company’s business, have increased to as much as 30% of revenue since a March 17 executive order banned sit-down dining.

“It hasn’t been too bad. We’ve been able to survive, at least,” he said.

Cantina 76 also has locations in Greenville and Mount Pleasant. Its Kiawah Island restaurant is temporarily closed.

McMaster and Dr. Linda Bell, state epidemiologist, urged individuals considered at-risk for COVID-19 based on Centers for Disease Control and Prevention guidelines to limit exposure to others. All state residents were encouraged to “continue prioritizing” travel between home and work when possible, according to a news release from McMaster’s office.

“Our goal from the onset of this deadly pandemic has been to protect South Carolinians, but as we all know, the state’s economic health is a major component of the state’s public health,” McMaster said in the release. “South Carolinians, now more than ever, should be vigilant in protecting themselves, their loved ones, and their communities by practicing social distancing and continuing to follow the advice and recommendations from our public health experts.”

On Sunday, DHEC announced 141 new cases of the coronavirus and eight additional deaths, bringing the official S.C. totals to 6,626 cases and 275 deaths. Two of the eight deaths occurred in Richland County, where 18 of the new cases were located.