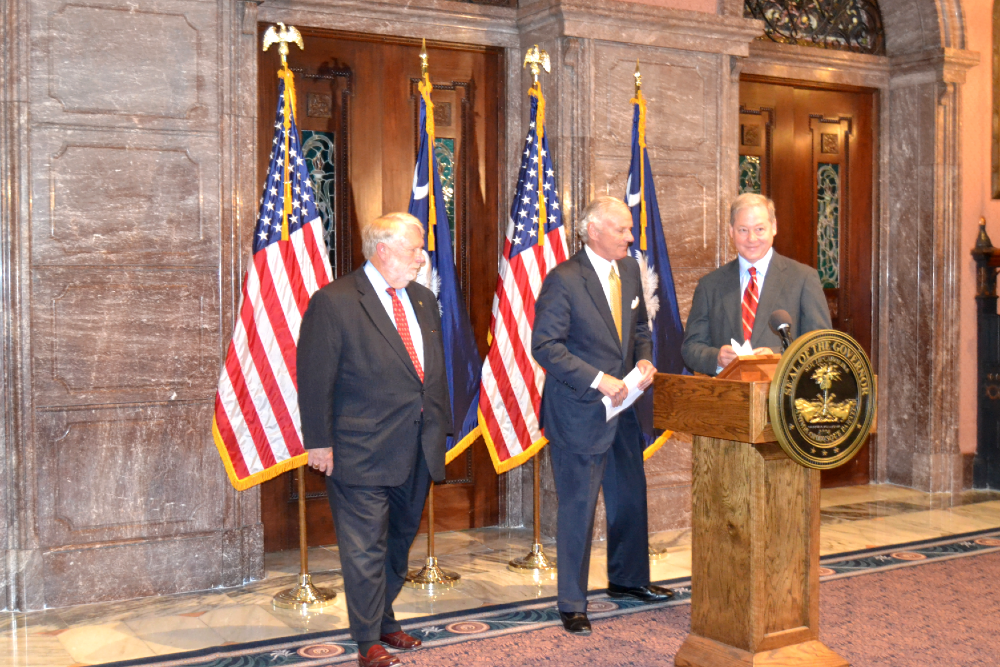 Harry Lightsey, Gov. Henry McMaster’s nominee as the next secretary of the S.C. Department of Commerce, brings a background in two industries — telecommunications and automotive — that both men believe will be key to continuing the state’s business recruitment and manufacturing momentum.

“I’ve spent my entire career being part of businesses that have shaped our modern lifestyle,” said Lightsey, introduced today as McMaster’s nominee to succeed Bobby Hitt, retiring this fall. “My career in telecommunications spanned the dawn of wireless communications and the internet. My time in automobile manufacturing has seen the beginning of a technological shift that leaders like Mary Barra, the CEO of General Motors, have described as unparalleled since the days of Henry Ford.”

Lightsey served as president of BellSouth Telecommunications before that company’s 2006 merger with AT&T and then as president for AT&T’s Southeast region. He joined General Motors Corp. in 2012, directing the automotive giant’s federal government affairs operation and its emerging technology policy.

“The competition for jobs and investment is fierce, and South Carolina can compete with any state in the nation and any country on the globe,” he said. “We must maintain the public’s trust in how their tax dollars and our state assets are used to incentivize economic development, and we must do so without losing our state’s competitive position.”

Hitt, appointed state commerce secretary in January 2011, has overseen 16.7% growth in manufacturing employment and more than $35.8 billion in capital investment, according to a news release from the governor’s office. The 129,373 jobs created during Hitt’s tenure have included those at three automotive manufacturers — Volvo Cars, Mercedes-Benz and Arrival — which located operations in the state.

“I honestly did not think I would have a tenure that lasted this long,” said Hitt, who joked that he wasn’t sure he would be in the job for the five years required to become invested in the state’s retirement system. A colleague of Lightsey’s for “several decades,” Hitt said, ”I have pledged to him that I will stay around and help him in any way that I can at no expense to the state as long as he would like me to help. ... We are steady and we’re growing. It will not stop, and I will do anything I can to keep it going.”

Hitt and Lightsey addressed the devastating effect of the pandemic on South Carolina’s hospitality and tourism industry. Simon Hudson, a professor of tourism in the University of South Carolina’s College of Hospitality, Retail and Sport Management, told a university publication for an online article in March that economists estimated the industry was down 15% from pre-pandemic levels, with tourism revenue halved from $24 billion in 2019 to $12 billion in 2020.

Lightsey said he intends to talk to industry workers and leaders to determine the best course of action going forward, and said the pandemic also exposed vulnerabilities in other industries that need to be bolstered.

“The pandemic has demonstrated the need to bring pharmaceutical, medical and biotech manufacturing back to the United States and to South Carolina,” he said. “The pandemic also demonstrated how quickly and easily disruptions can occur to our food supply chain. … In addition to bringing new businesses into our state, I believe that we have a role to play in helping established businesses thrive and transform as necessary.”

Area business leaders including Sara Hazzard, president and CEO of the S.C. Manufacturers Alliance, Nephron Pharmaceuticals Corp. owner and CEO Lou Kennedy and Duane Parrish, director of the S.C. Department of Parks, Recreation and Tourism, ringed the podium on the second floor of the S.C. Statehouse as Lightsey spoke.

“The guy’s got the resume. He said the right things,” Kennedy, whose company’s $215.8 million expansion was part of the $4 billion in capital investment South Carolina attracted in 2020, told the Columbia Regional Business Report. “I see nothing but upwardly mobile trajectory. … The whole thing was music to my ears, especially talking about innovation. We’ve been smack in the middle of Bobby’s 10 years, and I feel like, let’s help bring the next 10 along. With any luck, we’ll have another big announcement that we can deliver for the new guy.”

Hazzard said in a statement: “Manufacturing plays a critical role in South Carolina’s economy, and Mr. Lightsey’s background in emerging technologies and innovation and experience with globally recognized companies positions him to build on the legacy of manufacturing strength in our state.”

The Seante must approve Lightsey’s appointment. McMaster said he sought input from legislators and business leaders throughout the state on his choice and is confident Lightsey will be confirmed.

“I have every confidence he will keep South Carolina competitive,” McMaster said. “South Carolina has the people, the workforce, the infrastructure, the intellectual capital, the environmental assets, and the quality of life necessary to compete both nationally and globally for jobs and investment.”