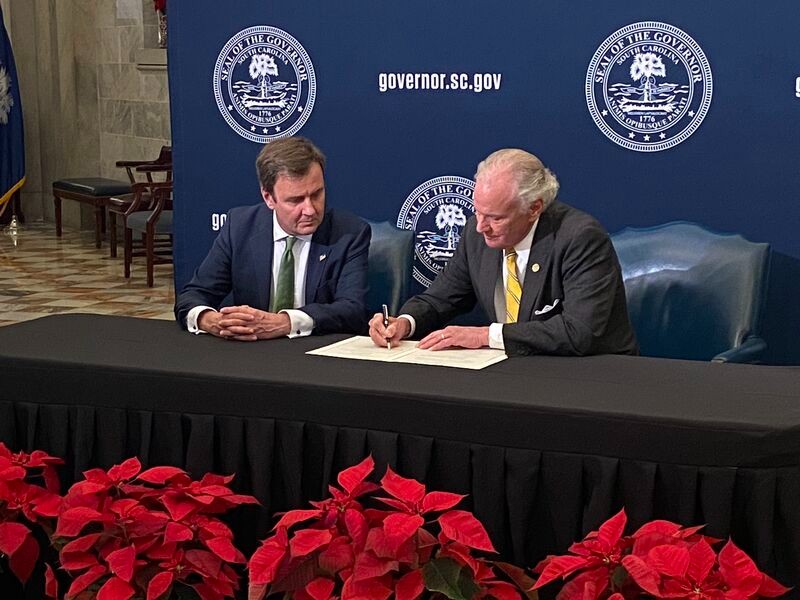 South Carolina has a historic connection to the United Kingdom dating back hundreds of years, but not many people might be aware of the strong connection the two currently have when it comes to trade.

Think of international trade and South Carolina, and obvious countries like China come to mind, as well as nations like Germany because of the large presence of BMW in the Upstate.

However, on an annual basis the U.K. and the state engage in $1.95 billion worth of trade, and a recent visit from Greg Hands, the U.K.’s minister of state for trade policy, aims to make that number even larger.

It's all part of what Hands described as a “twin-track” approach by the U.K. to increase U.S. trade on two levels – by engaging with individual states as well as the federal government.

In the future, U.K. officials also hope to engage with Oregon, Texas, Oklahoma and Washington for further agreements.

“An MoU is all about agreeing to cooperate and work in areas of mutual interest when it comes to trade,” Hands told SC Biz News. “It’s a very short, business-like document compared to something like a free trade agreement which might be a thousand pages. This document goes into detail on ways we will cooperate to grow trade, with focus particularly in two areas, the automotive industry and life sciences, which are big sectors both for the U.K. and for South Carolina.”

Increased worldwide demand for electric vehicles has led the U.K. to become one of the world leaders in the industry, and recent dramatic growth in the EV sector in South Carolina makes this an opportune time to enhance trade, Hands said.

“South Carolina is considered one of the automotive hot spots of the U.S. and we want to get a piece of the action,” he said. “We want to look at how we can get the U.K.’s EV sector thinking about South Carolina as a good place for growth and investment.”

Hands also noted life sciences, which is the fastest growing industry sector in the state. The industry is also booming in the U.K., especially in Scotland and Wales, making it another area ripe for trade growth, including boosting export opportunities. The MoU also focuses on building research and academic partnerships

The MoU has the support of Sigmatex, a British carbon fiber manufacturer whose North American headquarters is located in Cameron in Orangeburg County.

“As a UK company, we chose South Carolina as our preferred base in North America due to the many benefits offered by the state including a strong labor pool, a fast-growing industrial sector and a business-friendly regulatory environment,” said Paul McMullan, CEO of Sigmatex. “The news of South Carolina and the U.K. agreeing on an MoU is very welcome indeed and sure to bring further benefits to companies like Sigmatex.”

Hands said the goal is to eventually grow the MoU with South Carolina to focus on a wider array of industries including green energy, professional services and others.

“There’s a lot of strong economic growth in the Southeast and South Carolina is one of the leaders,” Hands said. “The state overall has a good outward-looking view on growth from the governor’s mansion to the business leaders. We’re very interested in the growth you’ve got going on and we want to be a big part of it going forward.”