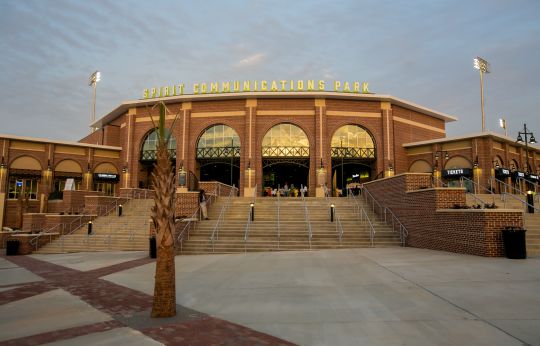 The Fireflies’ inaugural season ends on Labor Day. The dimensions of Spirit Communications Park, Ballpark Digest’s 2016 Ballpark of the Year, allow for a football field to run parallel to the first base line, making available thousands of seats along the west sideline and in both end zones.

“We designed Spirit Communications Park as a multi-sport venue, and we’re excited to showcase high school football in 2016,” Fireflies president John Katz said in a release. “The Fireflies are thrilled to have the opportunity to provide these student-athletes with a first-class game day experience as they take the field this fall.”

Tickets are $7, with almost all of the ticket revenue going back to the host school, and will be available on game days at the park.

“This is a great chance to be the first high school football game played at Spirit Communications Park,” Ridge View High School coach Perry Parks said. “I think it's a great environment for the kids and a game they will always remember for the rest of their lives."

The Fireflies have a limited number of available dates for area high schools to play 2016 games at the ballpark. Interested athletic directors may contact Jaime Tamsin at 803-726-4487 or via email at jtamsin@columbiafireflies.com.

“Through our partnership with Palmetto Health-USC Medical Group Orthopedics, the Fireflies have made Spirit Communications Park available to these schools rent-free,” Katz said. “In addition, the Fireflies will be covering most of the normal operating costs for the schools, including the cost of officials, the majority of security costs and half of the cost to clean the stadium after each game.”