Freddy’s Frozen Custard & Steakburgers has broken ground on its new store at 2865 Sunset Blvd. in West Columbia. The new site, near Lexington Medical Center, is the second store in the Midlands after opening last month at 457 Killian Road. 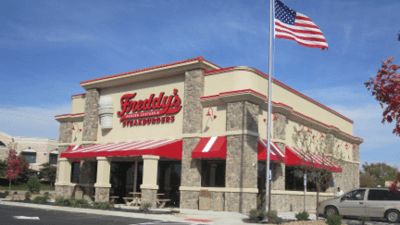 “We’re grateful for the warm welcome and for the kind comments we continue to receive at our Killian Road restaurant and online,” said Brett Rickert, franchise owner. “Construction on our West Columbia location started Monday and area residents can expect our signature lean ground beef steakburgers and creamy frozen custard in just a few months.”

A press release stated that the new site should be opening this summer. The 3,000 square-foot, freestanding restaurant will seat 96 guests and will have additional seating on the patio. Drive-thru service will also be available.

Co-founded in 2002 by Scott Redler and Bill, Randy and Freddy Simon, Freddy’s opened its first location in Wichita, Kan., offering a combination of cooked-to-order steakburgers, Chicago-style hot dogs, and other items along with frozen custard desserts.

Today, 245 Freddy's restaurants are located in 30 states from California to Pennsylvania, Virginia and down the east coast states to Florida.  In 2017, Freddy’s was been named for a fifth time to Entrepreneur’s Franchise 500 list, ranked No. 41, and for the fourth year in a row it has been included as one of the top 10 on Franchise Times magazine's Fast & Serious list.