Beer boom not slowing down in Charleston 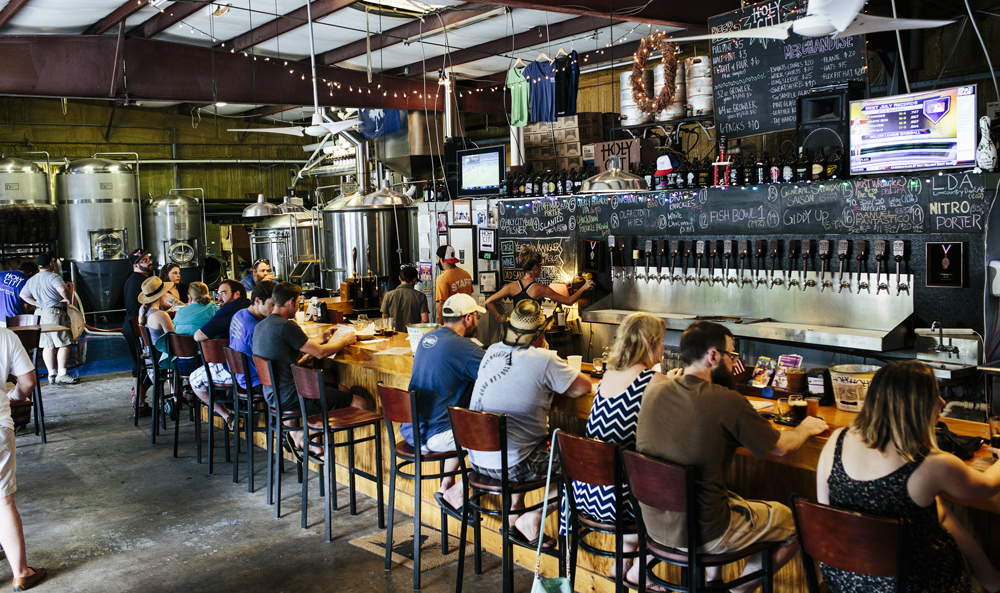 In 2005, Jaime Tenny and her husband, David Merritt, wanted to open their own brewery. Merritt had been a brewer for more than 10 years at Palmetto Brewing Co., and the couple decided it was time to strike out on their own. At that time, Palmetto Brewing was the only brewery in Charleston and one of the few in the state.

A big obstacle stood in Tenny’s and Merritt’s way: S.C. law didn’t allow beer above 5% alcohol by weight (about 6.3% alcohol by volume) to be brewed or sold in the state, and Tenny said that limit restricted how financially viable a new brewery could be.

“So we had two plans, and I still laugh that plan A was to change the law, and plan B was to move to North Carolina and open a brewery there,” Tenny said. “I really wish I could flash back to my young mind at that point and wonder why I thought changing laws would be easier than moving.”

Tenny began a group called Pop the Cap to advocate for changing the law, and after two years of work, the S.C. Legislature lifted the limit to 14% alcohol by weight (about 17.6% abv) in May 2007, opening the path for Tenny and Merritt to open Coast Brewing Co. in North Charleston.

In the 10 years since that law passed, more than 20 additional breweries have opened in the Charleston area, bringing the total to almost two dozen in the region, with more projected to open in the coming year.

Brook Bristow, executive director of the S.C. Brewers Guild, which is what the Pop the Cap group evolved into, said the industry’s growth is in part because of continuing advocacy to get more laws changed. In 2010, it became legal for breweries to allow customers to sample beers on-site, and in 2013 and 2014, laws changed to allow breweries to sell beer directly to customers and serve food.

“Now, running a brewery in South Carolina is actually a viable business,” Bristow said. “I think for some of the originators like Palmetto, it wasn’t that you couldn’t make money; but now we have various business models that we’re seeing, and it just makes more sense.”

Bristow said he expects the growth of breweries in Charleston and across the state to continue, but “It’s not going to just keep going to the sky; it’s going to be more of a gradual kind of growth rate.”

Chris Brown, production manager at Holy City Brewing, said he’s not worried about the increasing number of breweries encroaching on his business, because the business model has changed since Holy City opened in 2011. Brown said some breweries focus their energy on distributing beer, he said, such as Westbrook Brewing Co., while other breweries serve their beer only out of their taproom.

“The business model has changed drastically because a lot of these guys are opening up and distribution isn’t even the first thing they’re thinking of. It’s all taprooms,” Brown said. “Good on you if you can make all your money in the taproom and not deal with all this (distribution) nonsense, but I think it just depends on where you’re trying to grow and what you’re trying to do.”

Bristow said breweries are working to stand out from the crowd through different marketing techniques, such as social media, collaboration with other breweries and events; he said every taproom has its own vibe.

“I think they’re finding that just offering beer maybe isn’t enough anymore, so you kind of have to have another component to get people to come in,” he said.

Bristow said one thing he is worried about, though, is making sure new brewers are getting into the industry for the right reasons and producing quality beer.

He said the industry “is dependent on good quality product and good solid marketing from our breweries.”

Paul Thompson, general manager at Dockery’s, a Daniel Island brewery and restaurant that opened in November, agreed, saying, “We believe that if the quality of the product remains high, people in the community will continue to support all of their local breweries.”

“Personally, I’m excited about how competition always creates better products, and I look forward to seeing how our local breweries and consumers evolve together,” Wilson said.

When Coast Brewing first opened, Tenny said the only goal was to brew beer for distribution, since that’s all that was legal at the time.

More than 10 years after Coast opened, though, the laws have changed, and Tenny said Coast is finally buying the property that it leases from North Charleston to build a taproom and update its facility. In the current configuration, customers visiting Coast have limited seating options, mostly consisting of folding chairs.

“It’s past time,” Tenny said. “We’re small, it’s my husband and I and my cousin Michael, and it’s just taken this long to do it right, to do it sustainably, to do it where we have the cash flow and the bank doesn’t laugh at us. … We’re overdue for that taproom, that public space, but it is what it is, and this is the timing that we have.”

Other breweries have run into similar problems. Brown said Holy City doesn’t have enough room to store all of the beer it brews, despite the shipping containers covering its campus, which ends up affecting the brewery’s ability to meet distributors’ demands. Additionally, the Holy City kitchen is “basically a food truck that we attached to the back of building,” he said, so the brewery is preparing to move to another location in the near future.

Brown declined to comment on specifics, but said one of the biggest challenges in preparing to move is figuring out how to make sure Holy City’s vibe doesn’t get lost.

“To move to a new location, to lose the atmosphere that we have here, because it’s never going to be exactly the same, so that’s a big part of us trying to go into the new spot,” he said. “It’s like, ‘all right, what are we going to do to try to maintain the atmosphere,’ because that’s a huge part.”

Newer breweries are also having to expand to meet demand: Tradesman Brewing Co. was founded in 2014 on Johns Island, but its owners closed down their initial facility in September for a larger one on King Street Extension.

“We were having a hard time making enough beer to keep up with demand, and the little facility that we started with we outgrew relatively quickly, and there was no way for us to add any more equipment or streamline any of these processes,” Tradesman co-owner Chris Winn said. “It wasn’t even a matter of ‘Should we expand?’ It was a matter of ‘We really need to expand. We can’t make any more beer and, we can’t get any more people in the door.’”

Winn said Tradesman has been facing a similar problem to Holy City: the owners don’t want to lose the brewery’s vibe. The original Tradesman facility was intimate, and Winn and co-owners Sara McConnell and Scott McConnell, who are married, want to retain that feeling.

“The new building is so much larger, but that doesn’t mean it’s just going to be a big open room with the tanks,” Winn said. “One piece is that the tasting room space is going to be walled off and built up inside the building. (It) will still feel cozy and intimate.”

Winn said the beer industry across the state and across the country is in a state of flux as more people try craft beer and consumer tastes change.

“I think it’s an exciting time to be in beer,” Winn said. “We’re definitely in the middle of a full-blown American brewing revolution, and it’s great to see so many different takes on styles and so many variations on the theme.”

This story originally appeared in the Dec. 11, 2017, print edition of the Charleston Regional Business Journal.