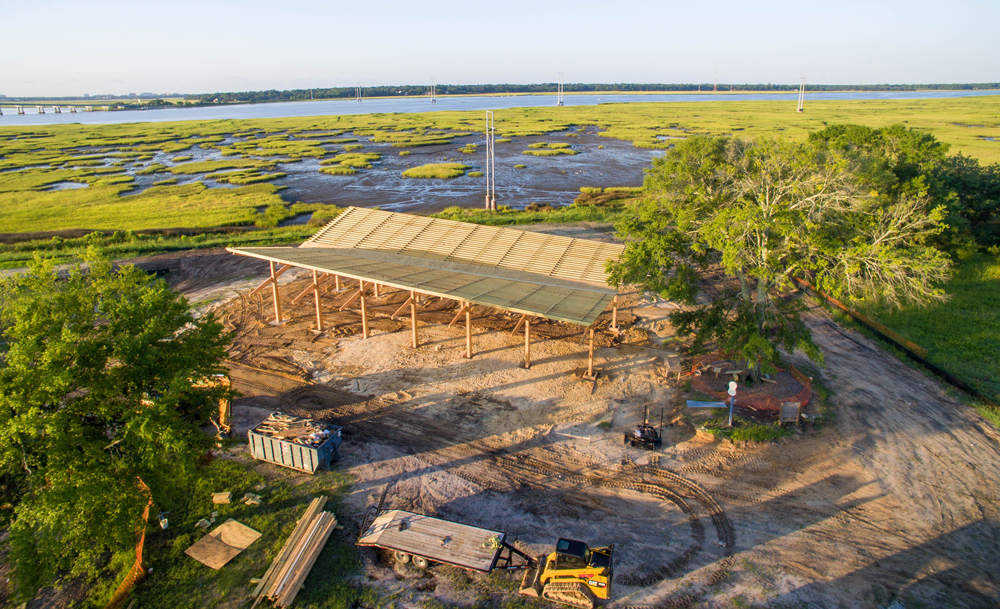 Construction of a pavilion at The Bend in North Charleston is nearing completion, making it the first structure in a series of projects on the 20-acre property.

The Bend is located at 3775 Azalea Drive, on land previously occupied by the Ashley Shores subdivision, a riverfront community of town houses and apartments. Since The Pearlstine Co. acquired the land in 2015, the land has been cleaned up and has hosted a variety of public events, including birdwatching groups, photography classes and live music performances.

Susan Pearlstine Norton, owner and founder of The Pearlstine Co., said she’s been deliberate about planning the redevelopment of The Bend.

“I have the luxury of not being a developer, so I’m just being patient and actually just doing things that appeal to me,” she said. “Restoring the environment there, building beautiful things. ... I’ve been very deliberate. I don’t need to take the money and run right now.”

The Pavilion at the Bend, designed by Reggie Gibson Architects, is an open-air structure with wood beams and a corrugated metal butterfly roof. Construction began in April and is expected to be completed in the fall.

Ooh! Events will manage bookings and event coordination at the venue, which will be available starting in October. The venue has a capacity for approximately 2,000 people. The Charleston County Democratic Party’s Blue Jamboree, the American Cancer Society’s fundraiser to benefit Charleston’s Hope Lodge and several private events are already booked.

Norton said the Pavilion at The Bend will eventually fit into a larger development picture, but she doesn’t know yet what that might look like.