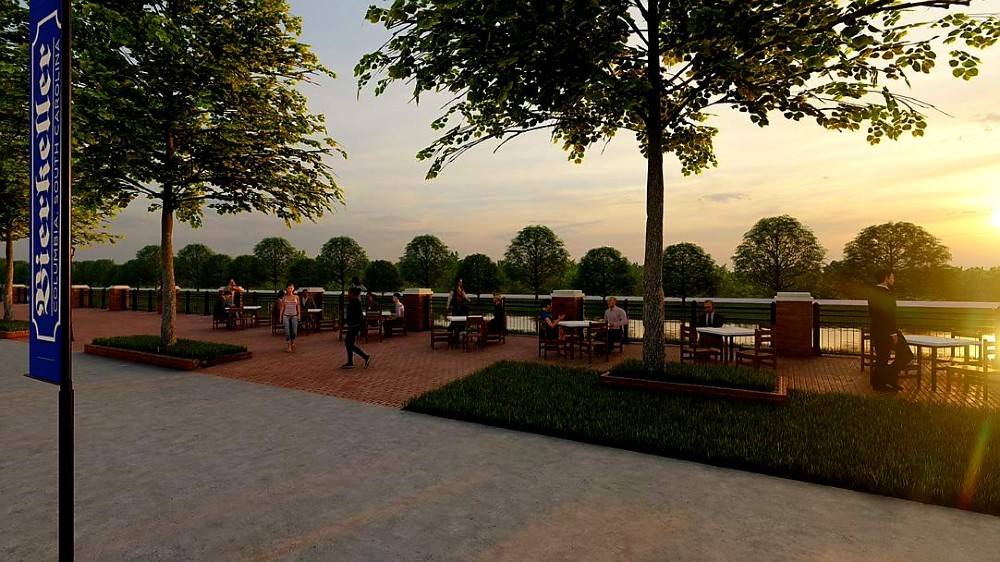 Columbia’s first riverfront brewery is expected to open in the fourth quarter of this year.

Bierkeller Brewing Co., which has brewed traditional German beer out of Swamp Cabbage Brewery since 2015 and has regularly played host to seasonal pop-up beer gardens, is opening a full-production brewing facility, biergarten and restaurant at the CanalSide Plaza at Sola Station along the Historic Columbia Canal on the banks of the Congaree River.

“It’s exciting,” Bierkeller owner and founder Scott Burgess told the Columbia Regional Business Report. “We’re putting ourselves in a pioneering position in a lot of ways. The riverfront, as much as everyone talks about the potential for development, we learned still has a lot of hurdles. This presented really the best opportunity in a space that’s already there that’s very close to what we’re known for.”

The brewery and biergarten will take up a large portion of the ground-floor retail space at mixed-use development Sola Station, with glass windows facing the water and tables planned along the esplanade.

“We’re pouring concrete floors and building it from the ground up,” said Burgess, who said an adjacent space is also an option for a future catering and private event setup.

Mashburn Construction will be the project contractor, while Sherer & Associates is the architect.

“We are always thrilled to see our local businesses grow, thrive, and prosper,” Columbia Mayor Daniel Rickenmann said in a news release from Bierkeller. “Bierkeller has successfully made the leap from 'pop-up' event to full-fledged brick-and-mortar establishment and will now be able to produce their own products in-house. This location at CanalSide is going to grow in a hurry, and we are excited to watch their journey as they lead the way to more riverfront growth and development.”

Covered and surface parking will be available onsite in the CanalSide garage, which has nearly 500 spaces, as well as spaces at Riverfront Park, a site of Bierkeller pop-up gardens for years.

This spring, Bierkeller is holding the pop-up events on the Saluda River off Candy Lane because of one of several obstacles Burgess confronted in the search for a permanent riverfront space.

“There are areas that will flood,” he said. “There are areas that are currently zoned as recreational by the Federal Energy Regulatory Commission that present an extra hurdle, and those power lines run the entire length of the Columbia side. … There are some historic things, with plans with USC down near Williams Street. The Guignards have been involved and own a lot of the property and have a vision for it that they want to see. … It started to sink in to me why it’s taken quite a while for something like this to happen.”

Biekeller’s brewhouse will feature a German-designed, 15-barrel system, with beer served directly from lagering tanks. Bierkeller’s packaged beer is served in reusable flip-top bottles, purchased by customers with a deposit and returned for freshly filled ones at no cost.

The extensive outdoor space will include long, communal tables imported from Germany, while European street-style cafe seating will overlook the water. Self-service and to-go windows for beer and food will supply the outdoor spaces.

Food offerings will be traditional European/German fare such as rolls filled with fresh meats and cheeses, salads, sausages, rotisserie chickens, schnitzel and spätzle. The beer menu will include established favorites such as Kellerbier, Kolumbianer Kolsch, Weissbier and Rauchbier in addition to a rotating selection of existing and new seasonal varieties.

Wine and other specialty drinks will also be available.

“We found some inspiration on a recent trip to Germany,” said Burgess, who studied abroad in Bamberg, German while attending the University of South Carolina and spent nearly 10 years living and working in Bavaria before opening Bierkeller.

"It’s always a great day when we can celebrate the expansion of our local businesses and see them take that momentous step to the next level,” Ryan Coleman, director of the city of Columbia’s Office of Economic Development, said. “Bierkeller owners Scott Burgess and Sam Moses have both put a tremendous amount of care and hard work into this business, and their commitment to quality is undeniable. I’m excited both for their continued success and their creation of a new riverfront attraction that our citizens will be able to enjoy.”