VisitGreenvilleSC will soon have a new leader.

Heath Dillard will join the tourism organization as president and CEO effective Nov. 14, according to a VisitGreenvilleSC news release. 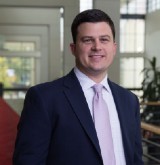 Dillard has spent the past 10 years as director of insights for the Charlotte Regional Visitors Authority focused on growing Charlotte’s $8 billion tourism industry and fostering the internal culture of the organization which includes Visit Charlotte and the management of city of Charlotte-owned venues such as the Charlotte Convention Center, NASCAR Hall of Fame, Bojangles Entertainment Complex, Spectrum Center and the Charlotte Film Commission, the release stated.

He replaces Jonathan Brashier, who has been serving as interim CEO since March.

Dillard was instrumental in creating the destination’s strategic plan, orchestrating more than $200 million in development projects and a sales strategy that led to securing major tourism events in Charlotte such as the 2021 Belk College Kickoff between Clemson University & University of Georgia, 2020 Republican National Convention, and 2019 NBA All-star Game, the release stated.

Dillard and his wife are both originally from the Upstate and eager to become part of this community and introduce their three sons to the region where they grew up, the release stated.

“Greenville has such an incredible reputation among the tourism community in the South; rapidly becoming one of the most buzzed about cities in the region,” Dillard said in the release. “I am so excited to be a part of the future of this destination