A recent article in Forbes Magazine estimated that by 2025, more than 2 million U.S. jobs could be unfilled because of a skills gap between available jobs and workers qualified to fill them.

That national statistic has state-level ramifications. A study submitted to the General Assembly in 2016 by the State Board for Technical and Comprehensive Education found high demand for jobs requiring education beyond a high school diploma but below a four-year degree, such as a post-secondary certificate. But the study, done in collaboration with the S.C. Department of Employment and Workforce and the state departments of Commerce and Education, found that 65% of S.C. residents ages 25-54 lacked such credentials.

Numbers such as those have state leaders looking for ways to better supply a workforce pipeline also threatened by a rapidly aging — and retiring — workforce. 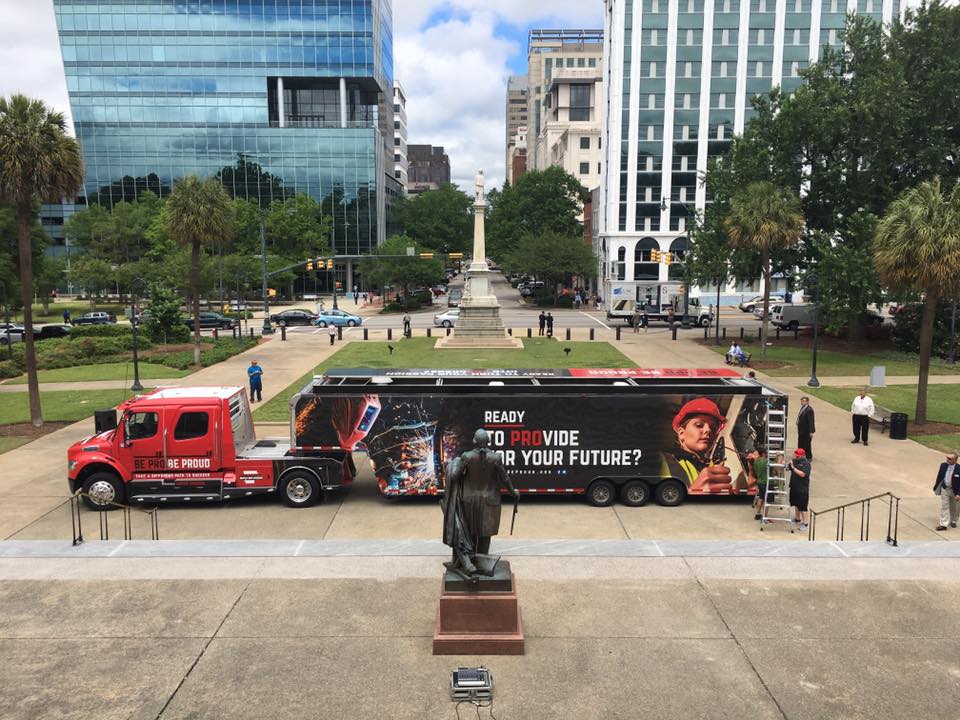 Ted Pitts, president of the S.C. Chamber of Commerce, said the private sector in South Carolina has been preparing for the impending lack of skilled workers with several programs, including Be Pro Be Proud.

The program, started in Arkansas in 2016, aims to challenge how South Carolinians think about professions with immediate hiring needs such as plumbing, commercial-license truck driving and welding, and to persuade them to pursue those careers.

The initiative would outfit an 18-wheel tractor trailer with hands-on simulations depicting specific jobs. The truck would travel to locations throughout the state in an effort to drum up awareness and interest in those jobs — but it faces funding hurdles.

“This program looks to identify individuals that should be looking at these careers,” Pitts said. “In today’s world, you have to meet them where they are, and that is in the middle and high schools. Ultimately, this program will help in recruitment and fill the skilled worker pipeline.”

The Arkansas truck made an appearance at the Statehouse in April 2017 when the initiative was first introduced, but $950,000 to jump start the program was cut from S.C.’s state budget.

“The project has not been funded yet,” Pitts said. “I think the state is still trying to wrap its arms around what the program should look like.”

Leslie Clark, director of S.C. Government Relations and Divisions for the Carolinas Association of General Contractors, said the traditional push for high school students to obtain a four-year college degree may not fit every student or every career path.

“We want to show students who may not be college material, or have no desire to go to college, that jobs are available right now out of high school or with a two-year degree,” Clark said. “You can be successful and move forward without being strapped with debt.”

Clark said state officials would choose the careers to be depicted in the truck. Currently, legislators are considering highlighting welding, CDL driver training and electrical plumbing.

“Each station has a game to help showcase and highlight a particular skill,” Clark said. “It’s something flashy that can bring a lot of attention. Once we add marketing and social media components, we can find what kids are interested in and communicate with them directly.”

Clark called the jobs involved, such as electrical work, the backbone of communities.

“If we don’t train folks, people will be living in the dark,” Clark said. “We have reached a critical time in society where we have to have people around the state who want to work. We just have to find them and give them a push in the right direction.”

Clark said she is working with the governor’s office and the Legislature to find funding to begin the project.

“We are looking for grants available through S.C. Department of Employment and Workforce to get the initial shot of money to get the program going,” Clark said. “The business community has made it known they are willing to add funds.”

Jim Garman, former president of the Home Builders Association of South Carolina, was a part of the unveiling in April. He said he anticipates getting final funding for the program soon.

“Funding has been an issue, but I think we have it worked out,” Garman said. “The workforce is getting older, and we have to find ways to get new blood in the system. This program allows businesses to connect with interested students as young as junior high.”

Clark said the truck would make a number of appearances at middle and high schools around the state and would also travel to state fairs, football games and other events.

A 48-week forecasting model shows the program reaching nearly 50,000 students in its first year, with nearly half pursuing the featured careers. If 20% of the students reached enter the workforce, that would mean an additional 10,000 workers.

The program’s goal to drive 100,000 people into the workforce over a five-year period, according to literature provided by the Carolinas AGC.

If the funds are provided, Clark expects a 120-day turnaround to have the truck ready to roll.

“We would love to have something by the beginning of the year, but feasibly it may be we’re looking at next school year to get something on the road,” she said.

This story first appeared in the Sept. 10 print edition of the Columbia Regional Business Report.

Great Article!! MFGers in SC should take this seriously have have a plan to attach the skills gap. One thing we Employbridge (ResourceMFG & ProLogistix) are doing to help our clients is offering free online classes to our thousands of contingent employees through PennFoster to further develop skills and knowledge. #betterworklifeacademy