CRBJ: The story of a startup 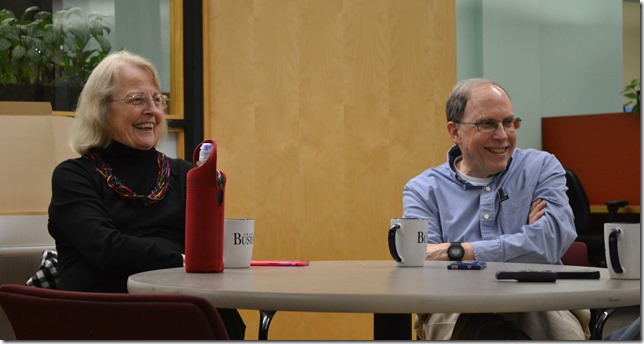 Sarah and Bill Settlemyer talk about the early days of the Charleston Regional Business Journal, which turned 20 years old in 2015. (Photos/Ryan Wilcox)

Pirates, entrepreneurs and a grand adventure

Aweek after I joined the Charleston Regional Business Journal in 2007, the publisher asked everyone to dress up like pirates. It was Halloween, and I was new, so I wore an eye patch and a necktie.

The day was full of games, skeleton trophies, beer, lots of food and an annual report displayed on a wall of the newsroom. Plans to grow the company and undercut the competition were met with exuberant arghs! from a group of rowdy pirates who were my new co-workers.

After spending the better part of a decade on the night desk at The Post and Courier, I quickly realized that the Business Journal was different. I was moving from a larger, more structured, corporate environment to an entrepreneurial culture that embraced the chaos of being a startup.

But everything we talked about that day — and we talk about every day — focused on serving our audience with integrity, dedicated customer service, journalism and, equally important, fun.

Soon after I joined the company, the Business Journal was sold to Ohio-based Brown Publishing, a regional daily newspaper publisher making a run at many business journals across the U.S.

We started the Columbia Regional Business Report in the Midlands in 2008 and later bought a business newspaper in the Upstate called GSA Business.

We were on a tear.

Then the Great Recession hit, and Brown Publishing filed for bankruptcy. The Business Journal was part of a nearly $100 million filing, and suddenly we were national news for reasons any business would like to avoid. Every few weeks, a bankruptcy judge in New York decided whether I was going to get paid.

Like many companies during the recession, the Business Journal emerged with fewer employees and more than a few battle scars. We also found new ownership that invested in the company.

This year, the Business Journal turned 20, and while we haven’t made a huge deal out of our transition from teenager to young adult, I wanted to use this last Viewpoint page of the year to give you a glimpse into how our startup began, when a lawyer read a story in The Wall Street Journal, found a few pirates and took a leap.

Twenty years ago, a Charleston lawyer read in The Wall Street Journal that business journals were emerging as good startup ventures, so he decided to begin one.

Bill Settlemyer and his wife, Sarah, who was a head nurse at the Medical University, founded the Charleston Regional Business Journal by pulling cash out of her retirement account and starting the business in an extra bedroom in their home.

That was 1995. During the past 20 years, the company has experienced what a lot of startups see: early failed partnerships, embezzlers who were caught and prosecuted, terrible and perfect hiring decisions, executives who didn’t get paid so staff members could, and a sale that allowed the company to expand but also entangled it in a recession-led bankruptcy.

Bill, who sold the business and retired in 2008, said business journals made sense as a niche publishing sector because they did something no one else was doing.

“Somebody realized all the small businesses and local businesses didn’t have a newspaper about them that reported on local business in their communities, so it was a need that hadn’t been met,” he said.

Bill had produced an informational VHS video about Charleston and felt the tug of storytelling, but he was interested in business and writing, and he understood entrepreneurship from the ground up by having started several businesses.

“I launched the business in our second bedroom in our town home because I was not working at that time. As a matter of fact I’d pretty much concluded that I would never get a job ever again in my life,” Bill quipped. “So this looked pretty good.”

Bill got methodical. He started planning with a whiteboard and created a business plan — one he now laughs about. He hired a consultant and connected with a national trade group of business journals to answer two questions: Am I the right person? And is this the right market?

The consultant felt the numbers were solid and Charleston was ready for a business journal; but the moment Bill completely knew was after he talked to the publishers of other business journals, all of whom loved what they were doing.

“We managed to get that far and, honestly, I was doing everything. I was the editor, the publisher, the finance person, the salesperson, the whole thing — which is ridiculous, but that is what I was doing,” Bill said. “Everything was a
panic-loaded blur until Grady showed up.”

Grady Johnson, the group publisher and CEO for SC Biz News, ran a surf shop in Mount Pleasant for a decade after graduating from Clemson University. He also owned a business wholesaling automobiles and exporting antique cars.

He knew nothing about advertising, but he wanted to get off the road as a sales consultant. He was considering a job at The Post and Courier when someone suggested he join Bill.

“I love startups, and I really liked publishing, and I liked small business because I was a small-business junkie,” Grady said. “So this was all of those things. I was really excited by the thought of something that dealt with businesses.”

Soon after, Steve Fields, the vice president of sales, joined the company, and the executive team was solidified.

The group worked on large things — finding enough advertisers every couple of weeks to ensure bills were paid and payroll was met — and sought ways to grow the business.

“The Business Journal pushed into events, holding the first Forty Under 40 at The Joe, where about 39 people showed up, including the catering staff,” Steve said.

Today, Forty Under 40 sells out well in advance, with hundreds of people attending each year.

Everyone did everything all the time. One day while making a sales call at his desk in the Market Street office, Grady saw Bill looking at him through a hole in the wall he had just drilled to run cabling for a computer network.

“It was pretty wild,” Bill said. “Part of the story then is Sarah came home and announced she had breast cancer. So it was like, OK, does anyone else want to hit me?”

When asked if they ever thought of giving up, Sarah is the first to answer with a simple, firm, “No.”

“I said look, I’m over 50,” Bill said. “This is my last turn at bat on something like this, and I’m not quitting, which of course is one of the basic requirements for entrepreneurship.”

“I’d started enough businesses and failed enough to know that if this failed that I could do something else,” Grady said. “So I wasn’t afraid of the startup at all. It was just what I do, and I really liked Bill a lot when I met him.”

The startup culture that formed the Business Journal continues to drive talent to the company. There’s always beer in the refrigerator, and it’s not unusual for someone to break into song or explain in great detail why commas matter or how a sale went down to the wire. Longtime staff members recall Bill’s train whistle, which he would blow vociferously when anyone made a sale, no matter how large or small. Every success was celebrated.

“And that fit my style as well,” Grady said. “I think if we had known more, we probably would have been way more cautious and probably have done some things right, but we may have not done as much.”

Bill said the company averaged 17% growth for most of the decade, which let him know this new business would work. “We had rough times along the way with this whole venture,” he said. “We had some very rough times, but I think I never shook my sense that we had good value to bring to the table.”

Bill said it’s gratifying to see what’s happened with the business after he sold the company.

“I gave no thought at all to how difficult it would be or all the things we may go through. I didn’t even think about that,” Grady said. “I just figuratively grabbed Bill’s hand, and we jumped.”