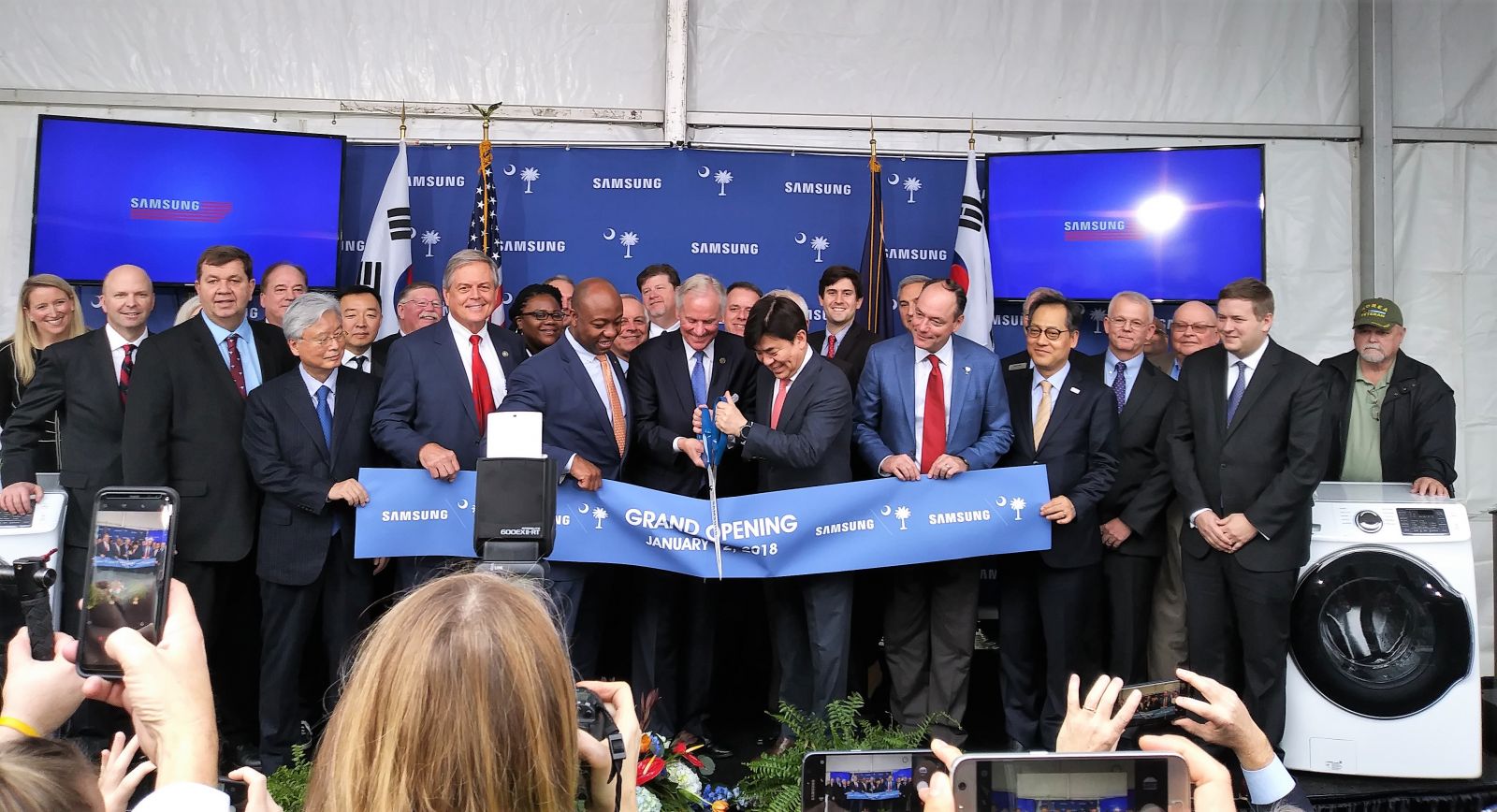 Business leaders and dignitaries celebrated Friday’s grand opening of the Samsung home appliance manufacturing plant in Newberry, expressing optimism about the future of both the company and the state of South Carolina.

The $380 million, 450,000-square-foot facility, which is housed in the former Caterpillar plant, is now producing washing machines at Samsung’s first home appliance manufacturing facility in the United States.

Samsung has transformed the site with the help of more than 800 full time and contract workers, adding 151,000 square feet and installing two manufacturing and assembly lines with 20 presses and 30 injection molding machines. The two assembly lines combine Samsung’s made-in-house components with supplied modules and package those products for shipment to U.S. consumers.

Samsung plans to produce 1 million washing machines at the Newberry County facility in 2018. The company had hired 350 people as of last November and expects to hire 954 by 2020.

Hyun Suk Kim, president of Samsung Electronics, said the company chose South Carolina for the plant because the state believed in innovation and had the workforce to back it up.

U.S. Sen. Tim Scott said he was proud to see that close to 90% of the current workers at the facility come from Newberry and surrounding areas.

“I look forward to a productive partnership for years to come, as our world-class workforce and competitive business environment, mixed with Samsung’s innovative ideas, will produce amazing results,” Scott said.

Gov. Henry McMaster said the Samsung plant was just the beginning for the state, as other companies around the world are taking notice of what South Carolina can offer.

Tim Baxter, president and CEO of Samsung North America, recalled his first visit to Newberry in June 2017, when Samsung announced plans for the facility.

“It was six months ago that we announced our commitment to Newberry, and here we are rolling product off the line,” Baxter said. “Most companies take 18 months to get a facility ready, but we were able to do it in six.”

“We have an opportunity, starting as a washing machine facility, to start an innovation hub,” Baxter said. “That’s the vision, to connect all of our devices. We want you to take your phone and communicate with your refrigerator, your washing machine, your television. Home appliances play a critical role in that vision.”