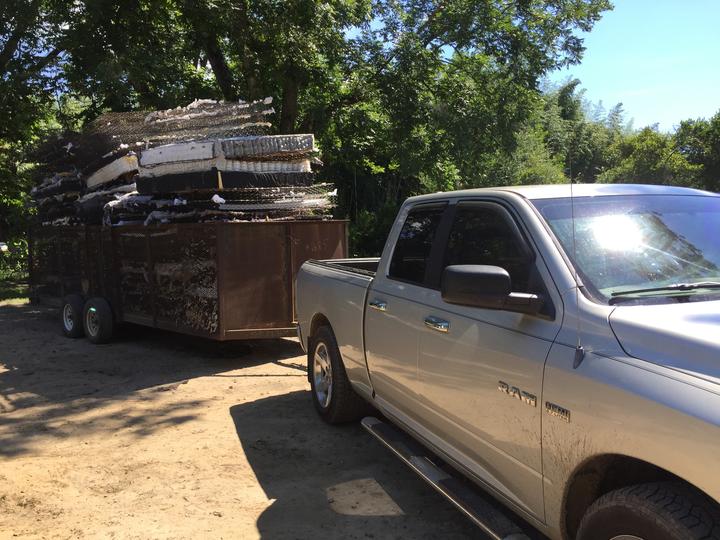 Discarded mattresses can be dismantled in South Carolina and their parts reclaimed by local companies.

As part of his company’s service, Rennie has been hauling away customers’ mattresses for years. But in 2016, he began transporting them to Nine Lives Mattress Recycling in Pamplico, where each mattress is dismantled and 90% of the materials are recycled and reclaimed by companies in South Carolina and North Carolina.

“Originally, we had a separate warehouse we were renting where we stored the old mattresses, separate from the factory and the new stuff,” he said. “We then brought the old mattresses to the landfill, but we always felt there had to be a better solution.”

He researched mattress recycling and learned about Nine Lives Mattress Recycling where the foam and quilted foam are pulled and baled, then sold to regional carpet manufacturers to turn into carpet padding. Wood from the box springs is donated to the community for free for reclamation projects and the coils are brought to the scrap yard for traditional steel recycling. They’re then turned into objects like bicycle spokes.

Owner Ralph Bogen established Nine Lives Mattress Recycling 15 years ago after learning how valuable mattress parts are and that all but 10% can be reused.

A former employee at Southeastern Plastics Recovery, he said, a manager once “showed me that that type of foam has value and there’s people that buy that. That’s how I knew that mattresses had that type of foam and had steel and all these components.”

What began as individual pick-ups with a U-Haul in Rennie’s early days soon morphed into the BedShred initiative and regular mattress collection times. Rennie now holds drop-offs every first and third Monday at 2150 Milford Street or individuals can schedule a mattress pick-up for a fee.

He found the program had the added bonus of reassuring customers that old mattresses were never reused by his company.

“We manufacture mattresses, but wanted to drive home the fact that we’re stripping the products and not using them again,” Rennie said. “Everything is torn up.”

Since its inception, Nine Lives has kept more than 300,000 mattress out of area landfills — where each mattress takes up about 40 feet of cubic space. On average throughout the country, mattresses fill nearly 132,000 square miles in landfill space each year, according to sleep product reviewer Tuck.

A portion of each mattress pick-up supports Lowcountry Local First, Lowcountry Land Trust and One Tree Planted, who partners with BedShred to plant one tree for every mattress or box spring it recycles.

Charleston is also getting involved with the city’s Charleston Mattress Recycling pilot program.

In January, the city received grant funding from the S.C. Department of Health and Environmental Control to encourage city residents to recycle their mattresses in conjunction with BedShred. Funds will help cover the expenses for the program, which Rennie said costs six-times more than bringing mattresses to the landfill.

Charleston is the only city Bogen directly works with, but other counties in the state have trailers set up for drop-offs. As they fill up, Bogen switches them out and brings the mattresses back to Nine Lives.

Repairing a trash compactor could cost as much as $65,000, Bogen said.

“Charleston County could recycle all the mattresses in their landfills for about that much money,” he said. “By removing those from the waste stream, that’s saved hundreds of thousands of cubic feet of landfill space.”