Helping Out highlights some of the many charitable events and activities going on in the Charleston area. Submit your news using our online form.

This year’s race will take place at 8 a.m. Oct. 9 starting at the Triangle Char & Bar at 828 Savannah Highway in West Ashley. Registration begins at 7 a.m., and an after-party event is scheduled from 9-11 a.m. The $35 for race registration includes a T-shirt and entry to the after-party. Day-of registration will be $40, and non-race participants can attend the after-party for $20.

The race’s top winner will have their name engraved on the “Stevie Award,” named after the late Stephen Condon in whose memory the race was founded. Runners and walkers also have the option to create and name their own teams in an additional effort to raise funds. For the team with the highest amount of money raised, Triangle will throw a private party for 25 people complete with drinks and food. 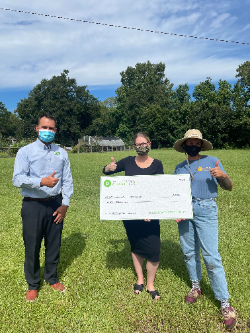 In each community garden, beds are available for the public to lease and grow their own produce. Additional community beds are used for education and demonstration. Produce are harvested by volunteers and donated to local food pantries and community organizations. So far in 2021, the conservancy has donated 2,561 pounds of produce.

Publix Super Markets Charities has also donated $135,000 to Lowcountry Food Bank to purchase fresh produce for the food insecure neighbors that the organization serves. The funds will also be used to purchase a new box truck for the food bank.

During Hunger Action Month in September, Publix Super Markets Charities will donate $5.5 million to 300 Feeding America member food banks and other nonprofits as part of its ongoing support to alleviate hunger and help local communities within Publix's operating area. Food insecurity among children in the 10 coastal counties of South Carolina rose 38% between 2019 and 2020, with more than 55,000 children who don't know where their next meal is coming from.

Flight Adventure Park has partnered with local nonprofit Courageous Kidz for a month-long fundraiser in support of childhood cancer awareness and research efforts in the Charleston community.

Throughout September, Flight is selling special edition apparel with 100% of the proceeds dedicated to Courageous Kidz, which provides year-round activities and experiences to help children battling cancer and their families maintain a sense of optimism and normalcy.