Laura Allen of Spartanburg was awarded the Order of the Palmetto, the state’s highest civilian honor, on Monday.

Gov. Henry McMaster surprised Allen with the honor during a press conference after proclaiming September to be Childhood Cancer Awareness Month. 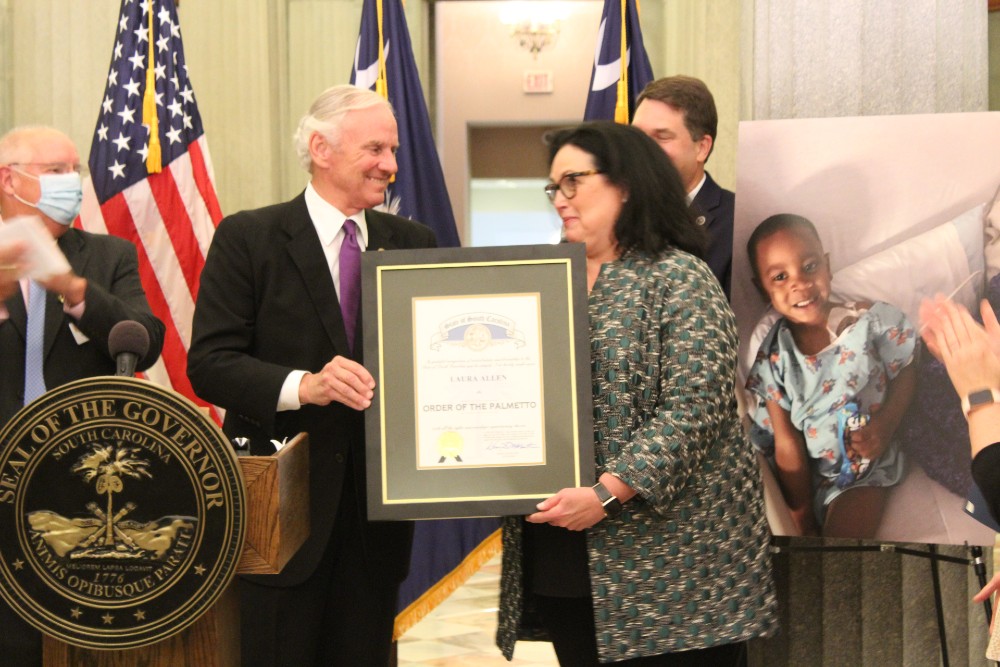 The Order of the Palmetto is awarded to citizens for extraordinary lifetime service and achievements of national or statewide significance, according to a news release. Allen has served on numerous boards across South Carolina and demonstrated an ongoing dedication to fighting childhood cancer, including building a fledgling and local Children’s Cancer Partners into a two-state organization, the release said.

“Laura has brought an impressive record of public service to South Carolina, where she took up the lifesaving battle against the No. 1 disease killer of our Carolina children,” Rep. Max Hyde, R-Spartanburg, said in his letter of nomination. “She has transformed a precious little ‘kitchen table charity’ serving just one county into a true national model for childhood cancer patients and family support.”

Children’s Cancer Partners of the Carolinas provides support to young children across North and South Carolina battling cancer. Since joining the organization in late 2014, Allen has grown the organization. It served a “small handful” then and is expected to serve more than 1,700 children by the end of the year, the release said.

Dr. Ki Young Chung, oncologist with Prisma Health-Upstate and chair of the Children’s Cancer Partners board, said that Allen embodies the organization's mission.

“Laura works tirelessly to improve and sustain the extraordinary safety net that CCP provides to Carolina children and families in need,” Chung said in the release. “Our state is envied by so many others for having such a unique resource — one that responds immediately, comprehensively and continuously to the needs of so many brave children.”