Water Mission, a Christian engineering nonprofit, has received a $2.27 million grant from the United Nation’s International Organization for Migration to expand emergency safe water access in areas affected by the war in Ukraine.

“This grant provides critical funding enabling us to quickly scale our efforts to bring emergency safe water throughout southeastern Ukraine,” George C. Greene, president and CEO of Water Mission, said in the release. “We are thankful for IOM’s trust and support in helping our in-country teams bring relief to people without water due to extensive damage to public infrastructure.”

Since February 2022, Water Mission deployed to serve people in need seeking safety in bordering countries, according to the release. By April, Water Mission was one of the first organizations to provide safe water access for internally displaced people (IDPs) within Ukraine. 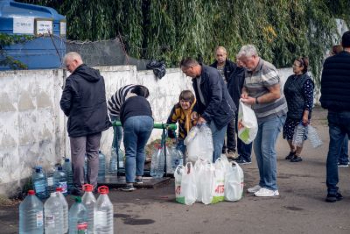 As of December 2022, Water Mission has installed more than 40 emergency safe water systems across seven Ukrainian cities, the release stated. These systems have produced more than 20 million liters of safe water, serving more than 100,000 people.

Many cities in the region have suffered immense damage to public water and power infrastructure, according to the release. Safe water access is critical in the cold winter months. Water Mission will continue to expand its response by working collaboratively with regional city officials, local governments, and churches to address the most critical safe water needs.