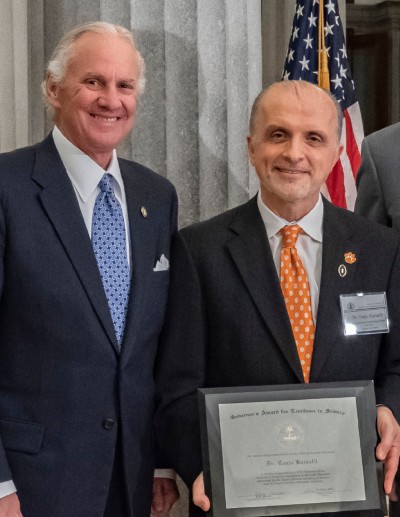 Tanju Karanfil, Clemson’s vice president for research and professor of environmental engineering and earth sciences, has received the 2021 Governor’s Award for Excellence in Scientific Research, and Marco Ajello, associate professor in the department of physics and astronomy, received the 2021 Governor’s Young Scientist Award for Excellence in Scientific Research.

Governor’s Awards are jointly sponsored by the Governor’s Office and the S.C. Academy of Sciences.

“Dr. Karanfil’s success in research is a product of exceptional analytical thinking skills and a deep focus on problem-solving,” Robert Jones, provost and executive vice president for academic affairs at Clemson, said in a news release. “Through hard work and dedication to his students and colleagues, he has excelled in his own research program and has served as a model to inspire others. Tanju is truly one of South Carolina’s treasures!”

An international expert on water quality, Karanfil has made significant contributions to the scientific understanding of water contaminants and treatment, and as a licensed professional engineer in South Carolina, serves frequently as a consultant to utilities and engineering firms, according to the release.

Karanfil’s research has aided the understanding and removal of contaminants from drinking water, wastewater effluents and swimming pools. He also extensively studied the effect of wildfires on water quality and treatability and has supported the development of new technologies for water and wastewater treatment to protect public health.

“I’d like to thank Gov. McMaster for recognizing the role scientific research plays in improving quality of life in South Carolina,” Karanfil said in the release. “I am humbled to join the great scientists who have earned this distinction before me, and I congratulate Marco Ajello, a great young scientist with a bright future.”

Karanfil is a board-certified environmental engineer by the American Academy of Environmental Engineers and a fellow of the International Water Association. Karanfil has also been elected principal member of the Turkish Academy of Sciences in his native Turkey and has earned the Science Special Award in Engineering from the Scientific and Technological Research Council of Turkey, according to the release. 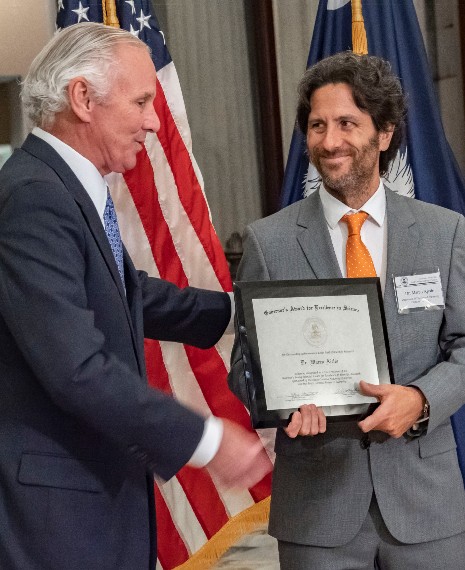 Ajello is an astrophysicist whose research has led to breakthroughs in scientific understanding of the evolution of supermassive black holes, according to the release. His research interests include high-energy astrophysics, cosmology and particle astrophysics.

Ajello led an international research team that measured all the starlight ever produced throughout the observable universe’s history. Astrophysicists believe that a 13.7-billion-year-old universe began forming the first stars when it was just a few hundred million years old, according to the release. There are now about 2 trillion galaxies and a trillion-trillion stars.

“The exciting research conducted by Dr. Marco Ajello is expanding our understanding of the universe, and connecting Clemson faculty and students with scholars and world-class research facilities across the globe,” Jones said in the release. “His brilliant work and new discoveries are propelling Clemson’s growing reputation as a center of excellence in astrophysics.”

Ajello was also part of a research team that devised a new measurement of the Hubble Constant, the unit of measure used to describe the rate of expansion of the universe, and another that captured the first photographic proof that merging galaxies can produce jets of charged particles that travel at nearly the speed of light.

“This is one of the most significant events of my career,” Ajello said in the release. “I’m truly humbled and honored to receive the Governor’s Young Scientist Award for Excellence in Scientific Research.”