At its July 14 meeting, the commission delayed a vote on a certificate of design approval for new construction for The Edge, a 15-story, 355,000-square-foot apartment building planned for the corner of Assembly and Washington streets, and referred the matter to a subcommittee workshop. That subcommittee meeting, held on July 25, hammered out more details of the project.

Lead architect Robert Neely of Forum Studio presented the changes made as a result of that meeting, which he called a great opportunity. The main differences in the plans shown Thursday included extended glazing on corner windows to more closely mirror the building’s neighbor, the Richland County Library, and architectural details added to the building’s north façade to address criticisms of a “monolithic” appearance. Brick detail at either end of the façade, combined with shaded stucco in the middle, created greater visual depth, Neely said. 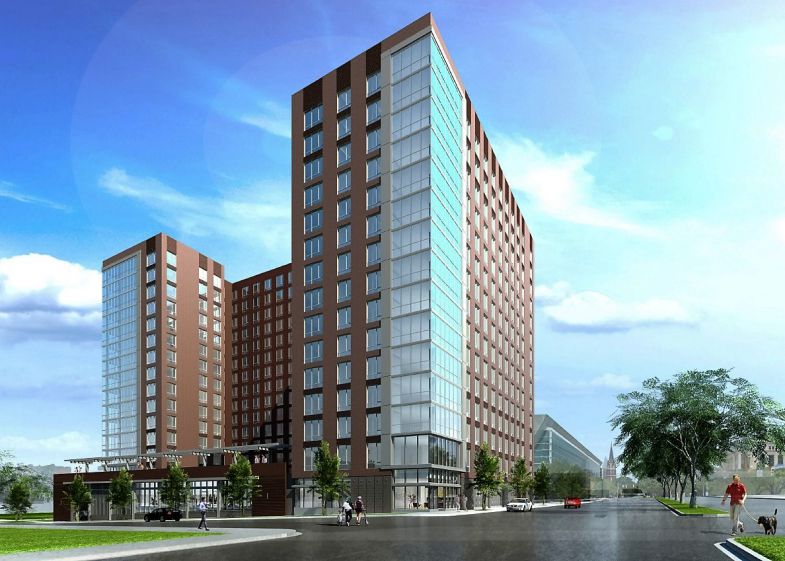 A contested trellis on the south side of the building was removed from drawings presented to the subcommittee, which requested it be returned if it was recessed from the street.

“We tried to be more stately,” Neely said.

The commission expressed lingering concern about the height of the north façade but unanimously voted to approve the design plan.

The meeting included continued discussion about a building at 1401 Assembly St. built in 1914. The site of several businesses, most recently a barber shop, the structure is one of a handful remaining from Columbia’s black business district and has drawn the interest of preservationists who wanted it incorporated into The Edge’s design plans.

The Edge developer, Clayco Realty Group, found that possibility infeasible but signaled a willingness to work with the city of Columbia to relocate the building. Robin Waites, executive director of Historic Columbia, said Thursday that her organization had “productive” conversations with Clayco about moving the building to the northwest corner of Park and Washington streets.

“The building has an important story to tell and needs to be protected from demolition,” Waites said.

The design commission has no purview over the structure, as it is not an historic landmark, and did not consider its fate in its vote.

Also Thursday, the commission approved a request for certificate of design approval for exterior changes for 1222 and 1224 Taylor St., former homes of Rose-Talbert Paints and Western Auto, respectively. Those renovations, part of a $7.5 million downtown facelift being overseen by Sumter LLC that also includes 1519 Sumter St., former home of Powell Furniture, include storefront restoration and minor façade changes.

The commission also approved exterior design changes to and preliminary Bailey Bill certification for 1649 Main St., former site of Hennessy’s restaurant. Columbia-based Garvin Design Group plans to restore the building’s storefront to its 1941 façade with an eye toward resuming restaurant and potentially office use.

The Bailey Bill allows owners of historic properties to lock in property tax assessments based on the property’s fair market value before renovations for up to 20 years.