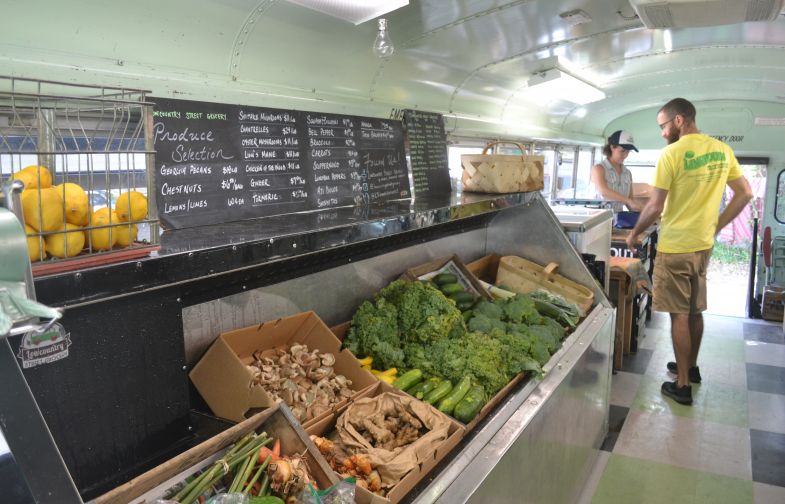 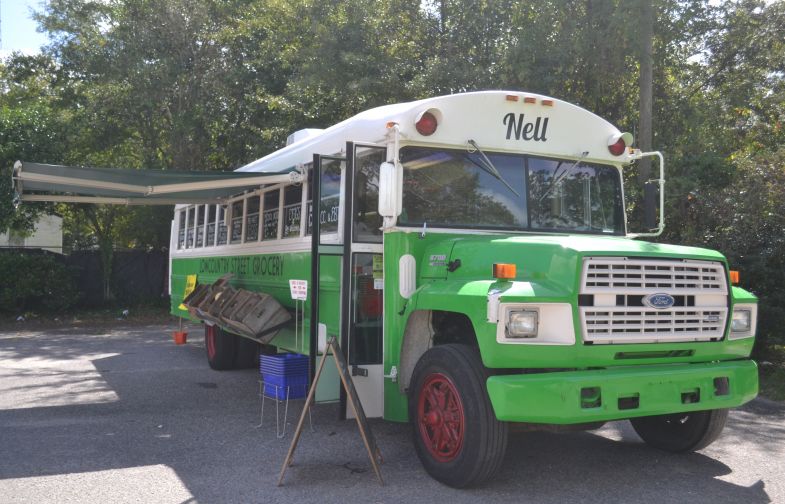 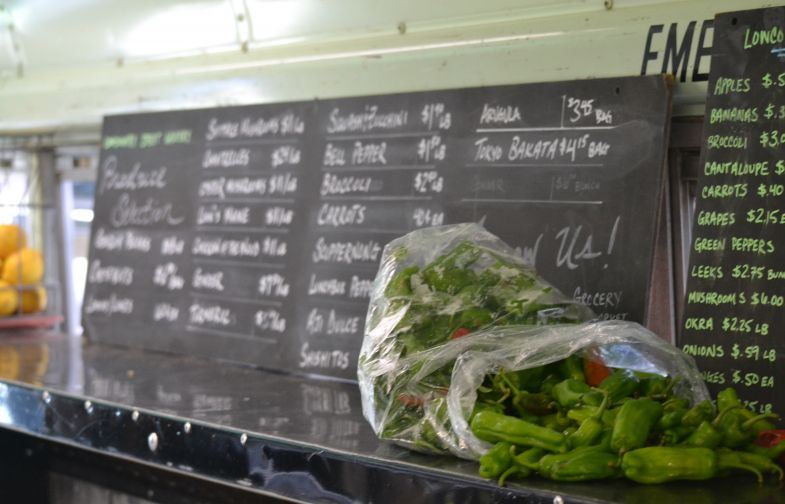 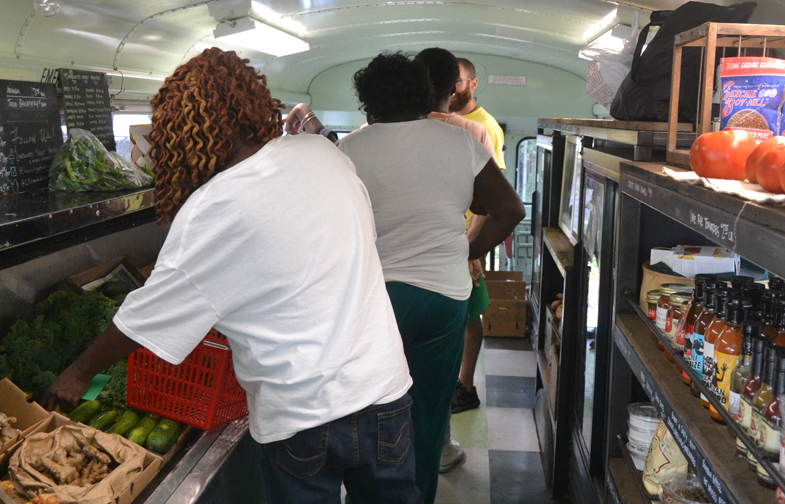 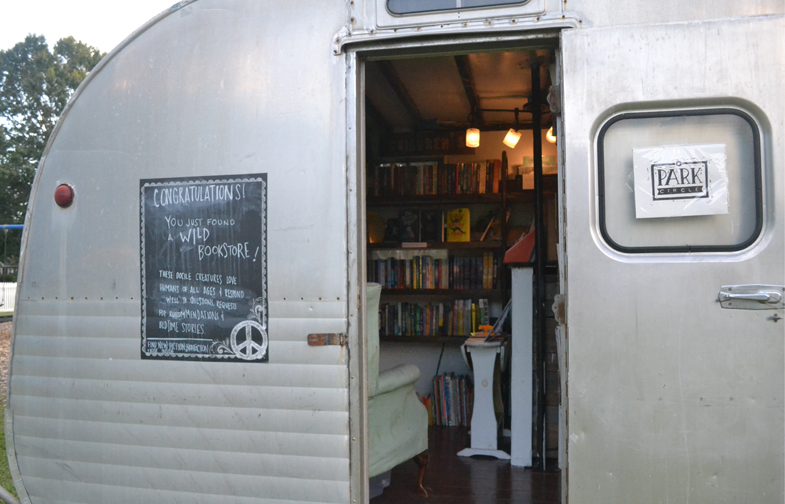 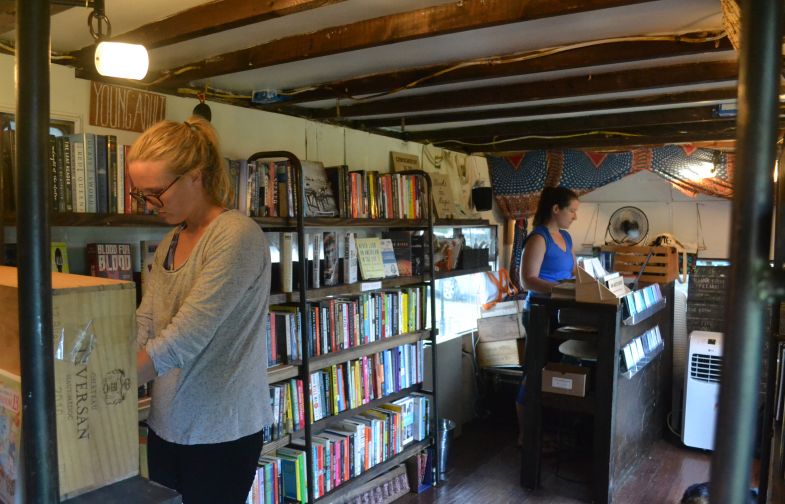 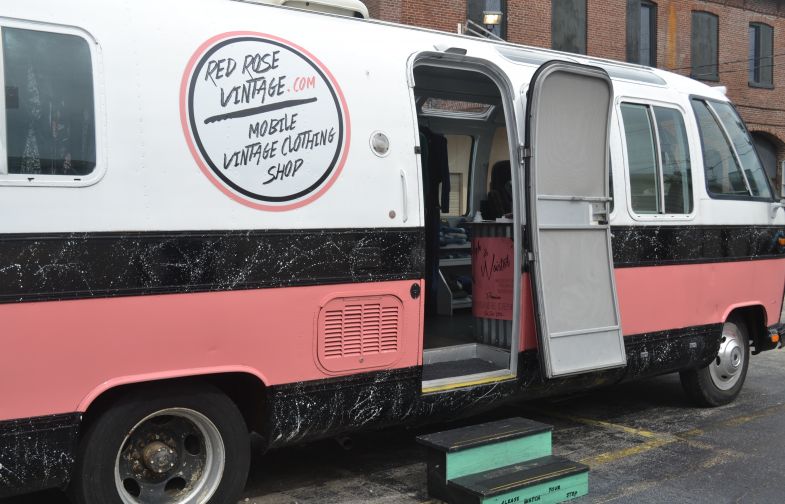 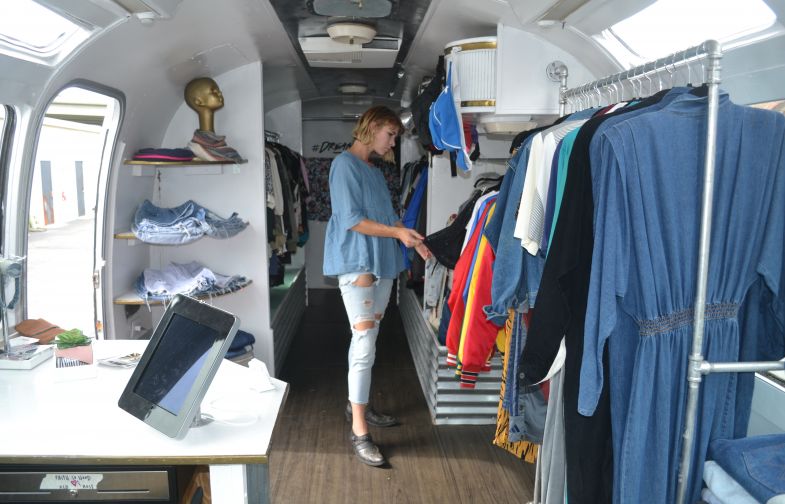 Red Rose Vintage founder Amy Rose said her mobile operation enables her to meet her customers where they are. (Photo/Liz Segrist) 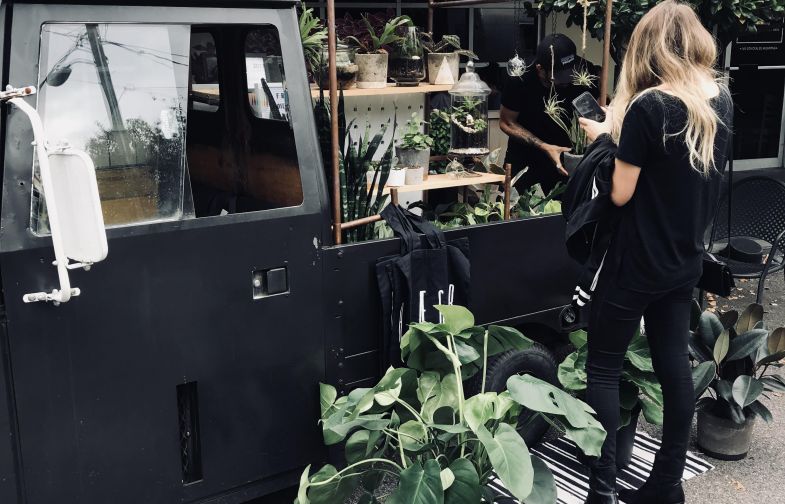 Haegur, a mobile plant shop, sells plants at different locations, such as The Park Cafe. (Photo/Provided by Nico Rittmeyer) 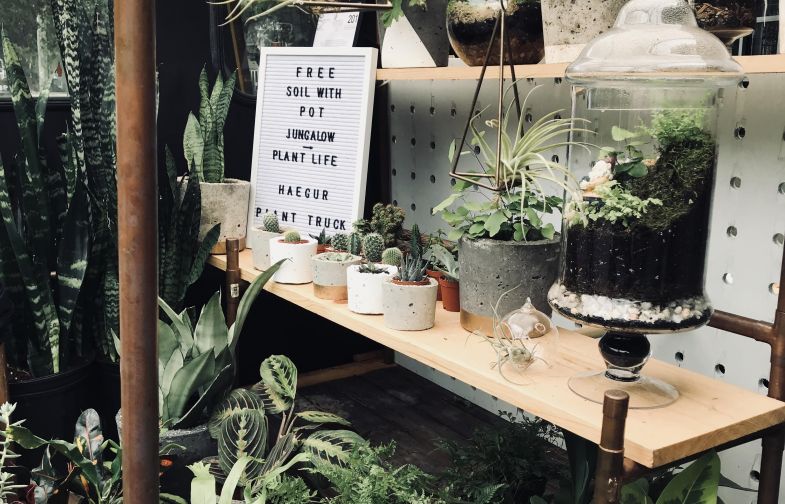 Haegur owner Bj Stadelman said the mobile plant store is a viable business model ahead of establishing a storefront. (Photo/Provided by Nico Rittmeyer)

She worked with her dad on renovations, investing $10,000 to gut the inside and retrofit the space with new clothing racks, storage spaces and a small dressing room. In March 2016, Red Rose Vintage mobile boutique was ready to roll.

Fanny packs, whitewashed jeans, brightly colored jackets and jean shirts hang inside, tributes to the fashion of the 1980s and 1990s. Rose sets up the mobile shop at locations in Charleston, as well as for private parties or events, expanding her formerly online-only business model.

“Rather than going into a store for regular shopping, you’re actually having this really cool experience,” she said.

Rose is one among a group of entrepreneurs in Charleston bucking the brick-and-mortar concept and taking their retail concepts mobile, launching businesses from inside old school buses, recreational vehicles or trucks.

Four mobile business owners that work in the Charleston region said their decision to go mobile had to do largely with the rising costs of commercial space in the region.

Colliers International – Charleston reported regional asking rents of $20.66 per square foot on average for shopping spaces less than 10,000 square feet, and $58.33 for spaces on King Street in downtown Charleston.

The firm’s second-quarter retail report said Charleston’s continuous economic expansion has made it increasingly difficult for retailers to open locations; business owners sometimes wait 12 to 18 months to move into a new space.

“Charleston is gearing away from the small, mom-and-pop shops, and the only people that can afford the space are corporate companies. ... So why not have a mobile unit where your overhead is gasoline and insurance?” said Bj Stadelman, the owner and operator of Haegur, a mobile plant shop. “That’s nothing compared to property taxes and the costs of having an actual, physical address.”

While working in the food and beverage industry, Stadelman started taking stock of the plants piling up in his yard and the medical supply truck in his driveway, which was purchased a few years earlier for a different concept.

“The idea just popped in my head of selling plants in this truck,” Stadelman said. “I just decided ‘I want to do this. I’m going to do this.’”

He launched Haegur in May in downtown Charleston. Stadelman makes the plant holders with concrete and then creates the plant displays. He uses his house for inventory and his backyard for a workspace.

On the weekends, he drives his newly painted and outfitted truck to businesses, such as The Park Cafe. Bowls of succulents, planters and air plant displays fill the shelves in the back. Stadelman said he wants to eventually open a plant shop, but the truck is an affordable option that enables him to sell now.

He said the mobile concept can help a business idea be realized, regardless of the business owner’s age or educational background.

“You learn just by doing it and doing it independently. No loans, no storefront. It’s a wonderful thing,” he said. “You do this kind of business because you love it, and then you watch it grow.”

Julia Turner and Christen Thompson were not expecting to launch a mobile bookstore when they met while attending a summer publishing program at The University of Denver; but when they both ended up in Charleston, they began sharing favorite bookstore concepts.

“We had a running Google doc of ideas, and then we decided to go for it,” Thompson said.

The co-owners of Itinerant Literate Books started selling books in 2015 at pop-up events. The friends-turned-business partners then used $8,500 from an Indiegogo campaign to officially launch their mobile operation. They found a 60-year-old RV trailer on Craigslist and bought it for $3,000.

After renovating the 126-square-foot space — which involved fully gutting the vehicle — they launched the bookstore-on-wheels in April 2016.

They said the mobile business gives them a chance to establish a financial standing when eventually applying for a business loan, and they like the idea of trying out different markets in Charleston to see which ones might work best as a permanent location.

The co-owners run the mobile shop from farmers markets, breweries, coffee shops and apartment complexes. They want to expand with a bookstore to house more books, host writing classes and serve as a community hub.

“To have an intelligent general public, you should constantly be reading to learn more about the world and other people’s experiences,” Turner said.

Thompson echoed her: “People have been writing stories for thousands of years because that is a way for you to understand the world around you. ... Books stay with you and give you context for why things are the way they are and why you think the way you do.”

Owners said the mobility has other perks beyond affordability. They enjoy that they can change locations based on demand and that the vehicles act as a moving advertisement for their businesses.

“I can go to my customers rather than waiting for them to come to me,” said Rose, who runs her vintage clothing store full time.

Owners said the overhead is typically low once a business is launched, but the remodeled buses, RVs and trailers come with quirks. They often have finicky or nonexistent air conditioners. The loss of a generator or a leak in the ceiling can eat into profits. The constant movement requires a new setup each day.

“You can’t shut up shop and it be the same the next morning when you go to work,” Stadelman said. “But I guess that’s the compromise you have for not having overhead. You have to put in a few more hours to set up and break down.”

Operators also said being mobile means relying on social media to let customers know their daily locations. They said flexibility and creativity are necessary to function in a small footprint. Mostly, they said to expect the unexpected.

“It’s a small space so you’ve really got to look at every single inch when you’re renovating it and make sure you’re taking advantage of all of your room,” Rose said. “It’s not easy, but that’s what’s so fun about it. You have to be really creative.”

This story originally appeared in the Oct. 16, 2017, print edition of the Charleston Regional Business Journal.