The company is moving from 1241 Assembly St. to 2510 N. Main Street. Trinity Partners brokers Roger Winn and Braden Shockley represented TPM in the acquisition of the property.

TPM purchased its new location for $550,000 from NOMA Revival LLC and plans to relocate by next spring.

“TPM’s move to North Main is a testament to the draw of the corridor’s new atmosphere,” Winn said in a news release. “The area is affordable, accessible to the central business district and transforming its amenities and business offerings for its residential and commercial neighbors.”

The firm moved to 1501 Main St., Suite 601, from 1913 Bull Street to accommodate a growing business and staff, according to a news release. Newsome Law owner Billy Newsome spent 25 years as a member of Nexsen Pruet before starting the new firm last year.

“We looked at properties for about a year,” Newsome said in the release. “Main Street is thriving, and so are we. We decided to go with this location for the same reason that I tell my clients they should choose an attorney – comfort, familiarity and trust. I practiced law on this street for 25 years, and we plan to be here for many years to come.”

A new upscale hotel has opened in Fort Mill. Cambria Hotel Fort Mill is the Choice Hotels International-franchised brand’s third location in South Carolina, joining Cambria Hotel Charleston Riverview and Cambria Hotel Mount Pleasant. Cambria has opened six hotels so far this year nationwide and plans to open up to seven more before the end of the year, according to a news release. 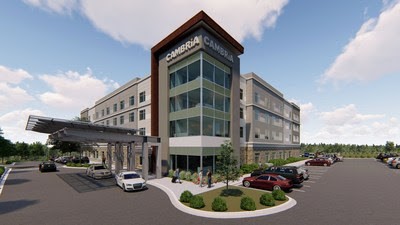 Cambria Fort Mill is located at 340 Amistead Ave. in a mixed-use development off Interstate 77 near several large corporations including Shutterfly, OneMain Financial and AmerisourceBergen.

“Neighboring two major metropolitan areas and a historic gem in its own right, Fort Mill has been the fastest-growing town in the region since 2014, making it a strategic location for this new Cambria hotel,” Janis Cannon, senior vice president for upscale brands with Choice Hotels, said in the release. “The Cambria brand is also experiencing a surge of growth, and it's a fitting time for us to expand in the Palmetto State. The Cambria Hotel Fort Mill's traditional style gives a nod to the area's deep ties to the farming and textile industries by offering a rustic, welcoming atmosphere, contemporary essentials and approachable indulgences that guests will appreciate.”

The hotel was developed by the Weinstein Development Co. and FHF Hotel LLC.