Plots of land near the Congaree River in West Columbia that just a little over a decade ago were vacant patches of dirt have been transformed into vibrant new places for local residents to live, work, shop and play in the city’s growing River District, thanks to the willingness of city officials and a local real estate firm to work together.

It’s a partnership that now is resulting in additional development elsewhere in the city, including the recently announced Langley Pointe project, a $60 million mixed-use development located near Lexington Medical Center off the high-traffic U.S. Highway 378 corridor.

NAI Columbia, the real estate firm that has worked with West Columbia on the redevelopment project from its beginning, recently closed a $3.75 million deal that will become the residential side of Langley Pointe.

The 38-acre development will feature one, two and three-bedroom apartments, some with direct access to garages. Other amenities will include a clubhouse, co-working space, resort-style swimming pool, community pavilion, outdoor kitchen, pet spa and a pet park.

Lead developers for the Langley Pointe project are Fickling and Co. of Macon, Ga., and Novare Group of Atlanta, with co-sponsor BCDC of Atlanta. Classic Plains is the general contractor for the project, while SGN + A is the architect. The first units are expected to be available by February 2024. 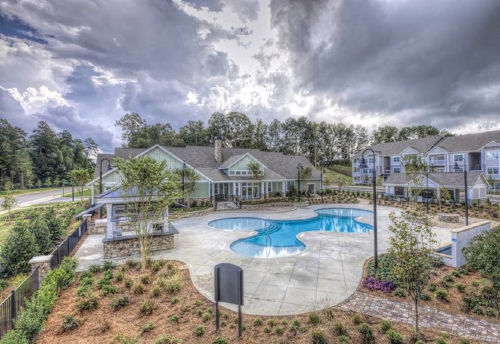 City officials and team members from NAI Columbia say Langley Pointe is a direct result of years of collaboration that resulted in the transformation of the River District.

“Work on the River District area really dates back to the late ‘90s when the city first made a concrete decision to start acquiring property near the Gervais Street Bridge and create a gateway development to attract people to West Columbia,” said Patrick Chambers of NAI Columbia’s development team. “It’s really been a process that’s developed over the past 25 years.”

Although the project was years in the making, the core work on the River District has taken place in the past four years, building on the city’s 2018 citywide redevelopment plan which focused on making the city a destination instead of simply what officials called a “passthrough from Columbia to Lexington.”

Chambers, along with fellow NAI staffers Ben Kelly and Jack Springs, has worked closely with the city in the redevelopment of the RIver District, representing the city both in the purchase of prime parcels of land where the district’s key projects are located and in the sale of the parcels to their current owners.

Those parcels include the four-acre Brookland Complex, a mixed-use area that officials credit with kicking off the entire area’s redevelopment.

“We saw that area as being right as a catalyst for both economic growth and development for West Columbia decades ago,” said Brian Carter, West Columbia’s city administrator. “We knew if we could do something right there at the gateway coming across the Gervais Street bridge we could create excitement in that area and use it to grow other areas of the city. We knew that we could turn an area that was essentially a dirt parking lot into a neighborhood.”

West Columbia Mayor Tem Miles said the Brookland Complex enabled the city to add both residential and retail property that would attract new people to the area and allow them to experience already existing downtown businesses that had been local favorites for decades, such as popular Italian restaurant Al’s Upstairs and Cafe Strudel, a popular brunch and dessert spot.

“We’ve had high standards from the beginning for what we wanted in that area – we knew what kind of development we wanted and what we didn’t want,” Miles said.

The Brookland Complex, located in the area directly across from the Congaree River and Riverwalk in West Columbia, combines residential, retail, dining and entertainment opportunities for the community.

It includes the Brookland apartments, the Black Rooster, a casual French-inspired restaurant with a rooftop bar, and businesses such as the Gentlemen’s Quarter Barbershop, Select Physical Therapy and The WRKT, a pilates studio.

Once the Brookland Complex was complete, other projects quickly followed. One of the biggest was the addition of Savage Craft Ale Works, a veteran-owned brewery at 430 Center St. The addition of Savage CRaft was the result of research by NAI’s team and the city in an effort to bring a brewery to the River District because of the positive results other cities saw when they added a brewery to their downtown business mix.

City officials were able to take advantage of one of the neighborhood’s historic buildings through what is known as an adaptive reuse preservation project, enabling the brewery to go into the location of the city’s former city hall and fire station.

The district’s redevelopment also includes plenty of opportunity for outdoor activities, including Carraway Community Park, an all-inclusive playground that allows safe play for children with a range of physical, mental and other disabilities, and an Interactive Art Park that features a variety of interactive public art pieces created by artists from around South Carolina. The Weekly Meeting Street Artisan Market now takes place every Saturday in the Art Park.

Other residential opportunities are drawing more people to live in the River District. The area also includes Flow, a riverfront townhome and condominium complex, and construction is currently underway on 4West, a mixed-use project developed by Estates & Companies at the corner of Meeting and State streets. When it is completed, 4West will add 52 luxury apartments and 15,000 square feet of commercial space to the area.

The collaboration between the city and NAI is resulting in more than just an increase in visitors.

“It’s amazing to me the number of people I’ve heard from who used to live in West Columbia years ago, moved away and now they’ve been led to come back to the area because of what’s happening here,” Miles said.

Carter said the success of the River District is also paying off because developers and business interests now realize the city is willing to do what has to be done to improve the area for both residents and business owners.

“The development at Langley Pointe is not in our River District but it reflects the things we’ve been doing there,” he said. “Because of the work we’ve done in that district, we now know how to work with people who want to invest in our city, and now when we see an opportunity for further growth in other parts of the city we know how to get there.”