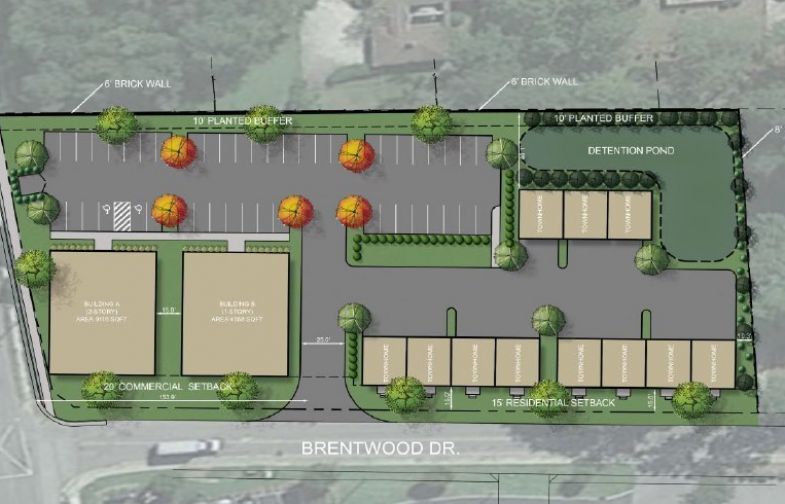 A mixed-use development featuring 11 townhomes is planned for the corner of Forest and Brentwood drives. (Image/Provided)

A mixed-use development featuring 11 town houses is planned for an area of Forest Acres in need of a facelift.

Cason Development Group is developing a commercial and residential project for the corner of Forest and Brentwood drives, currently the site of several dilapidated former multifamily properties. The project will include two commercial buildings totaling up to 15,000 square feet with 11 town houses of 1,500 to 2,000 square feet each.

The town houses will be priced in the $400,00 range, with marketing targeted to young professionals and empty nesters, according to a news release.

“We are excited about the opportunity to bring this unique mixed-use project to the Forest Acres community,” Frank Cason, president of Cason Development Group, said in the release. “Our team has put in a lot of effort on this project over the last 18 months. We are thankful that Forest Acres Council members saw the vision for our desire to transform this corner on Forest Drive. Our team had many conversations and a lot of input from neighbors and stakeholders in the community, and we look forward to getting this project out of the ground.”

Forest Acres City Council has approved the project, according to the release, and Cason hopes construction can begin later this year.

In March 2018, Cason’s rezoning request for the property was denied by Forest Acres City Council, with Mayor Frank Brunson citing concerns about the effect of increased commercialization on area residential neighborhoods.

Frank Cason, who could not be reached for comment Thursday, said then that he was discussing next steps with the owner of the property, which was under contract.