The BullStreet District’s latest addition is a big one.

Washington-based outdoor outfitter REI Co-op plans to build a 20,000-square-foot store in the northwest corner of the district at the intersection of Bull Street and Freed Street. Freed Street will be reconfigured to extend to Bull, said Chandler Cox, project manager at master developer Hughes Development Corp., and Boyce Street will extend to Colonial Drive.

“You’ll see a lot of new infrastructure,” Cox said. “We are so excited. We’ve been working on this one for a while. … We have been really focused on finding retailers.”

The BullStreet location will be the second in South Carolina for REI, which opened a Greenville store in 2011.

Cox said the sporting goods company’s focus on green projects, along with community programs such as its REI Adventure travel program, makes it a “perfect fit” for the BullStreet District, which is developing a 20-acre public park and daylighting Smith Branch, a stream that currently flows in underground pipes at the site of the former state mental hospital.

“We definitely sought out REI. Knowing what kind of company they are and what they represent was important to both parties,” Cox said. “Coming up with the first big national retailer at BullStreet was really important for us to set the tone for what we want the caliber of this project to be.”

REI is owned by members, but membership is not a requirement to shop at its stores, which also offer classes on topics such as hiking, backpacking and “bear bags,” which detail safe food storage.

“They’re such a cool retailer,” Cox said. “They do so many things more than just store sales.”

Since the 181-acre BullStreet District launched as an ambitious redevelopment plan in 2015, Cox said more than $100 million in building permits have been issued, more than 2,000 construction jobs created and more than 300 full-time employees put to work. 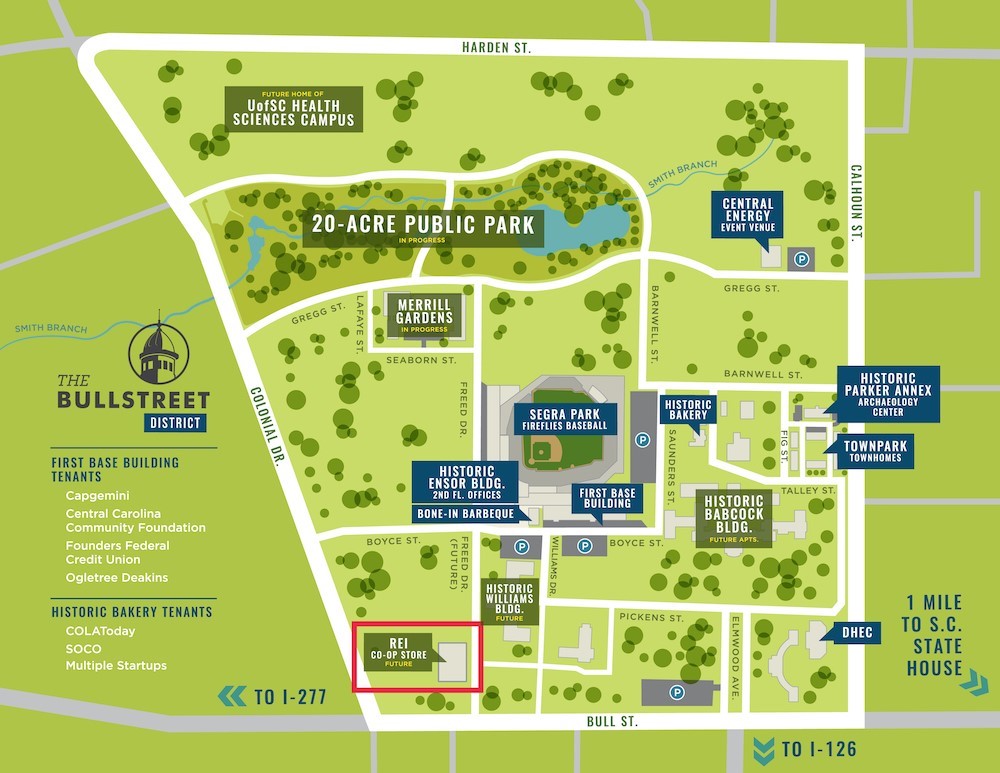 “All I can say is stay tuned.”